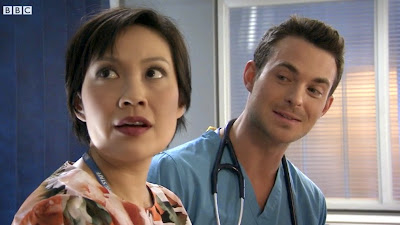 
The BBC make me laugh.

First up, well done. No, really. Well done to them for introducing a female East Asian character in Holby City (Amy Teo played by my friend, Wendy Kweh) who, for once, is in a position of seniority, and for giving her so large a share of storyline. It’s a shame, however, that this storyline seems to revolve around her romantic and sexual relationships with two white men.

Before anyone says anything, let me just say that I have absolutely no issue with East Asian women having relationships with white men, or any other kind of men for that matter. But when that’s literally ALL WE SEE on our TV screens, this becomes highly problematic. Where is the East Asian male in all this? At home, doing the accounts and playing with his stereotypical needle-dick?

You can almost imagine all the earnest BBC types in the planning meeting going, “Oh, but oriental men don’t DO that sort of thing, do they?” How China got to be the world’s most populous nation will remain forever a mystery, I guess. The truth, though, is probably far more prosaic than that. The East Asian Male has probably never even occurred to them.

Of course, I can hear the defence now: “We don’t even consider colour”. No, from a position of privilege where it’s never once affected them, I’m sure they don't. How else would they come up with a storyline as blatantly colonial as “Lone Chinese Female as sexual 'prize' of two all-conquering white males”?

I can vividly remember the BBC Head Of Series announcing to me with some pride that “She (the character of Amy Teo) is married to JOE MACFADDEN”. I’m sure this wasn’t intentional but it was nearly impossible not to be smacked with the subtext of, “Hey, look, one of 'your people' has bagged herself the hunk from Heartbeat." (No, I’ve never watched it either). But that’s how it looks from up there. “There’s one of you, isn’t there? You should be grateful!”

On the last point, I would add that I even hear that from fellow East Asians. “Well, at least there’s a Chinese character” or, “Well, there are only a few of us." Never mind the fact we’re the fastest growing minority group, contributing way beyond our weight to the British economy. Personally, I think we deserve better.

Daniel York is an actor and playwright. He was central to the Royal Shakespeare Company The Orphan of Zhao controversy, challenged by the British East Asian Artists.
Posted by Madam Miaow at 6/04/2014 12:54:00 pm

Not to mention the fact that there are loads of East Asian males working for the NHS. It's one of the few places where East Asian males are overrepresented both here in the UK and in countries like the US, Canada, Australia etc.