My TEDxEastEnd talk: Migration and Diversity, mirrors and diversion

I had a great time last Saturday as one of the speakers at the TED x East End event. I talked about migration and diversity, mirrors and diversion, looking at how politics and economics distort the history of human migration since we all walked out of Africa 60,000 to 120,000 years ago.

A banker, a worker and an immigrant are sitting at a table ... 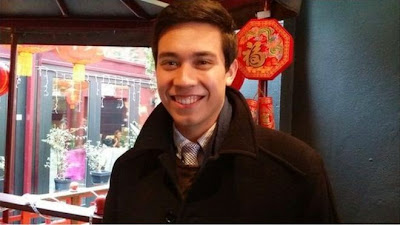 While it is always uplifting to see the wicked repent and mend their ways, the BBC Newsbeat item — acknowledging how racism against Chinese Brits is largely ignored — is in danger of providing the corporation with bleeding-heart cover in the absence of measures to rectify the injustice.

The Newsbeat article quotes Michael Wilkes of the British Chinese Project as saying:
"Essentially Chinese people don't like to worry other people. There's a mindset within the Chinese community that we need to keep our business within ourselves, within our own family unit. I'm saying to young British Chinese people now that we can speak out. It's our responsibility - when you're being prejudiced against, you've got to speak up."

Well, that's a powerful get-out-of-jail-free card, allowing the protectors of Jeremy Clarkson's Top Gear petri dish to wriggle off the hook. Blame the victims and take a bow.

It's hard to ignore the utter hypocrisy of the publicly-funded BBC (barring a few enlightened individuals fighting the good fight for genuine balance and justice). The corporation notoriously runs its employment of women along the lines of Logan's Run, where we're mostly bumped off at 50, but also renders east Asians invisible. It declines to cast us in normal roles, which would show us as part of the fabric of British society — which is exactly what we are.

I mean, no regular Chinese characters in Eastenders? Really? Still?

There are plenty of examples of the establishment's fear and loathing of East Asians in general and the Chinese in particular. In Beebland, we are either invisible and excluded or else we turn up once in a blue moon to embody the ugly stereotypes lurking in the fantasy world of the white-bread powers ruling that particular roost.

Their nadir for many was the  Sherlock: The Blind Banker episode: a vivid illustration of the routinely-ignored racism against us. Instead of acknowledging and tackling the glaring and hateful dehumanisation contained therein, they gave the creeps a BAFTA.

The BBC is a BIG part of the problem, rather than even a part of the solution. If the corporation was sincere, there would be east Asians on their channels every night, depicted as normal folks alongside everyone else. The media are lagging way behind the advertisers, who've included increasing numbers of us in the past years because the ad men and women understand that we are not only human beings deserving of equal treatment and representation, but also (in purely monetary terms) a worthwhile slice of the market.

Our absence reflects the prejudice of media gatekeepers, management strata and the theatre establishment (hello, Royal Shakespeare Company). When you create a vacuum, this in turn creates space for nightmares: a blank canvas for the most ghastly of projections. The sleep of reason produces monsters and the BBC has played its part.

It's encouraging to see journalists, editors and producers finally taking this on in the Newsbeat article. However, in context, that piece is a sop thrown to the youth market (which has a more enlightened attitude towards issues of race, gender and sexuality, as well as growing numbers of east Asians) by one hand, while the other ensures the continuation of the conditions that allow such racism to maintain its foothold. Enough of the crocodile tears. Let's see some action.
Posted by Madam Miaow at 1/07/2015 01:43:00 pm No comments: