"One thing stands out above all from this blog: the excellence of Madam Miaow's writing. Her commentary is consistently strong, especially on Chinese cultural and political issues, and unsurprisingly - given her comedic background - the sense of humour is top-class. We really enjoy reading this blog not because of its political insight - but simply because it's really, really good." Politics.co.uk

” … a novelty in politically charged entertainment, defies easy analysis. … the unforgettable Hackney and Bermondsey Tea Ceremony. … not so much political entertainment as politicising entertainment. … You can’t really ask for more.” Ben Chacko in the Morning Star

"Charming, witty and sophisticated ... I am entranced, won over." The Sunday Times

"It's the stuff of brilliant satire ... riveting." The List

"Wise and wonderful creature ... transgressive being ... a disposition and complexion somewhere between a frolicking lamb and a rutting teenager that just discovered it was Britney."
Alan Pillay, "Comic Strip Presents" actor in Time Out

"This marvellous collection builds like a symphony, from its opening dances through the surf of language and ideas to the breath-taking cross-channel swim of ‘Tinderbox plc’. Assured, funny, angry, exhilarating, and with a shout-out to the majestic Bob Devereux for good measure, Chi Chi’s Glorious Swansong demands to be read; demands to be listened to. A triumph."
Alan Moore

"Anna Chen’s talent is rare yet what she writes is in a long-standing tradition: as a poet she blends commentary on both the social and the political in sharp, vibrant, often cuttingly funny verse. Highly recommended!"
Jack Womack

"Anna Chen’s poetry wears wet leathers, red lipstick, stilettos – and is heavily armed. Her slim volume, Reaching for My Gnu, is filled with what I’d call 'strap-on poems'. They look like an evening’s easy pleasure but are far more painful and unforgettable than you’d bargained for."
GREG PALAST in VICE MAGAZINE

“Anna Chen is fighting the good fight with fierce, funny, moving and sulphurous poems. You wouldn’t want to cross her, but you want to read her.” HEATHCOTE WILLIAMS

Reaching for my Gnu by Anna Chen has been featured at Socialist Unity.

“… a strange rendezvous of language, wit, and the imagination. … She fully integrates the movingly personal, the vibrantly social and the diablolically political. Her rhyming is frequently quasi-Byronic, full of surprise and acerbic invention … Burning words, full of life and truth.” CHRIS SEARLE MORNING STAR

“As a poet Anna Chen is brilliant and dangerous. In Reaching For My Gnu she operates one wild-ride roller coaster that soars to altitudes of unfettered wit and then plunges with a startling and implacably knowing anger, stripping away pretence and pretension and targeting both ancient oppression and contemporary crime. ‘What work of depravity is a man who amasses more than he can spend in a lifespan?’ Her deck of cultural references includes Poe and Freud, Stalin and Hemingway, junk food, Marlon Brando, Moby Dick, and Anna Mae Wong, and she deals these cards face up with a unerringly sense of history uniquely coupled with a perception that’s as topical as tomorrow.” MICK FARREN

Academic critique of poem "Yellowface" at the Contemporary Theatre Review

"The set looks great, the lights equally so and the ping-pong balls fire smoothly."
The Guardian

"As a performer, she is massively assured, able to court audience sympathy with judicious flashes of vulnerability. Tall and lithe, Chen's intensely physical act recalls a latter day Emma Peel"
Plays And Players

"What she does by careful stages is strip her audience when her audience ... has probably arrived in the expectation of stripping Suzy Wrong."
The Herald

"... this arresting one-woman show ... pulls off a rare feat. She talks about 'wimmin's things' and makes the men in the audience squirm and laugh at the same time."
The Scotsman

"If you like shows that involve ping-pong balls, KY Jelly and surgical gloves."
London Evening Standard

"... a comic and hard-hitting broadside against the stereotyping of Chinese women as exotic sex kittens."
The Big Issue

"... Anna Chen is on a laudable mission: to question our cartoon perceptions of the stereotypical Chinese person... a very convincing case for the neglected and influential history of Chinese women ... this colourful and dynamic monolugue is truly revealing."
The List review

"A satirical romp through the sexual sphere, the show has a more serious side ... a no-nonsense piece of theatre."
Stage and Television Today

"Miss Chen's sensitive portrayal of this extraordinarily creative artist did much to dispell the often vicious hype directed against the so-called dragon woman who broke up the Beatles." Yoko Ono: A Life in Flux, BBC Radio 3 (Review 4.04.1999)
The Observer

"Don't call me an Asian babe, Martin Bashir"
The Guardian 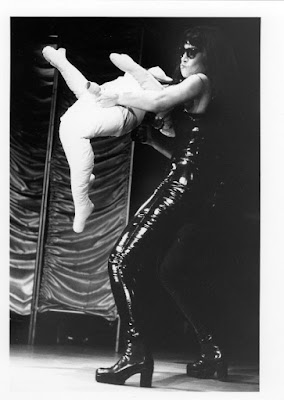 Pic: Suzy with her Uzi. Suzy Wrong Human Cannon, Edinburgh Fringe Festival. "Then, in an amazing coup de theatre, Suzy whips out an inflatable sex-doll and machine-guns the audience with ping-pong balls which shoot out of the nether regions of the doll with formidable muzzle velocity." Jeremy Hodges, Sunday Times