Anna May Wong Must Die! in China: Anna Chen's radio interview on Studio Plus

Here is a radio interview I gave in Beijing when I did my Anna May Wong Must Die! talk for the China-based Bookworm Literary Festival in 2015.


Anna Chen: A Voice to Conjoin Britain with China 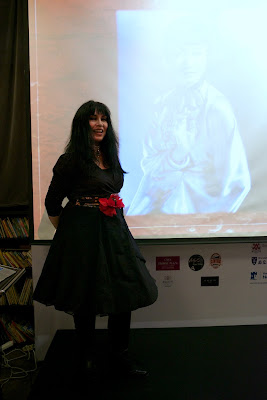 Chinese people are among the fastest-growing ethnic minorities in the UK. However, in areas such as arts, media and politics, they are still the quiet section of the population.

But London-based writer, performer and broadcaster Anna Chen is reluctant to remain silent. Actively involved in comedy shows and radio programs, she is using her voice to conjoin the British Isles with the Middle Kingdom.

In a dimly-lit room in Beijing, accompanied with rhythmic music, stand-up performer Anna Chen rapped a trenchant, witty song on Anna May Wong, a Hollywood legend and one of the most misunderstood talents back in the Roaring Twenties.

"This is what fascinated me about Anna May Wong, who was Chinese movie star, Hollywood's first Chinese superstar (and) the most famous Chinese woman in the world in the 1920s and 30s. And the things she was up against then, I felt I was still bumping up against at the end of the 20th century. "

Off the stage,Anna acts like a typical Londoner. But born to a Chinese father and British mother, she admits that she has always been conscious about her dual identities.

"I grew up as an English girl, feeling very English, but also very aware of the Chinese side of my family. So I always say that I have Beatlemania yelling at me in one ear, and Red Guards yelling at me in the other. It's a very, very strange mix, but I think it's quite interesting."

Immersing herself in the cultural extravaganza in the UK during the 1970s, Anna Chen has developed a strong interest in the entertainment industry since an early age. But when she started to go to auditions, this fledgling performer was not satisfied with the stereotyped roles being offered.

"One of the things that I came up against with was (that) there were no parts written for Chinese women. The only Chinese women you saw on the screen, either on film or on TV, were very demeaning roles. See, (there were) either the Dragon Lady: evil, being destructive; or else you were the Lotus Blossom: very delicate, in the need of help, and a little bit feeble; or else, the third thing (is that) you are completely invisible. So after a while, I wrote my first show called Suzy Wrong-Human Cannon."

In 1994, Chen took her show to the Edinburgh Fringe Festival, the largest arts festival in the world and thus became the first British Chinese comic to do so. A few years later, she also made her acting appearance in Stewart Lee's Fist of Fun. That experience not only granted her as the first Chinese comedienne shown up on British television, but to a certain extent, it also promised her future opportunities in broadcasting, particularly after successfully launching her first radio program on Yoko Ono.

"I started to make programs for BBC, for Radio 3 and for Radio 4. One of the things I always enjoyed was making programs about Chinese culture and Chinese people that showed in a positive light. I always said that if you dehumanize a group, if you make them just a blank canvas, if you create a vacuum and all sorts of really unpleasant monsters fill the vacuum, so I think it's very important to humanize. Because we are! That's the reality. "

Besides offering her voice as a regular guest talking about Chinese matters and current affairs, such as the Morecambe Bay cockling disaster and the 2008 Beijing Olympics, Anna Chen has also written and presented China-related documentaries and drama for BBC and London-based radio station Resonance FM. From her screen heroine Anna May Wong, China's manufacturing industry and its relationship with Britain, to Chinese sci-fi and chinoiserie cliches in music, the topics are diverse while her style is frequently labeled by critics as "witty, wisecracking and sophisticated".

One of her most well-received programs is a ten-part BBC series named "Chinese in Britain". Presented in an anecdotal manner, the program explores the lives of Chinese people who came to the UK before the immigration boom in the 1960s and unveils some less-heard-of truths. For example, the earliest Sino-UK cultural exchange could be traced back to the 17th century, when the Jesuit scholar Shen Futsong met King James II; while during the First and Second World Wars, actually there were a great number of Chinese sailors who joined the British merchant navy and contributed a lot to the British victory in those turbulent times.

"I do get people coming up saying: 'You know, we really, really enjoy your program.' 'Cause it's such a rarity! 'Cause what you normally get is that if they do look at Chinese, it is normally from the outside, from their point of view looking at something strange, rather than what we did, which is saying: 'This is us. We are here. Look, this is us telling you our story and just making it normal. '"

From stand-up, theatre to poetry and radio, this multi-talented artist is using her voice to "grapple with issues of politics and identity, subvert stereotypes and poke the status quo with a sharp stick" warts and all. Thanks to her projects, Chinese are no longer the takeaway owners or inscrutable Kung Fu experts, but ordinary people with diverse characters.

Anna says her role model is Prometheus, who inspires her to do her best to conjoin Chinese with the rest of the world.

"I think I am planting seeds. So whether it germinates, I don't know. But this is how I think of myself. I think with this next generation, we are starting to see more people coming up. So I think time is on our side."

Beside hosting her weekly radio show, Anna Chen is planning to write a memoir, which documents her life as a British Chinese.

For Studio Plus, this is Li Ningjing.

Click here to listen to Anna Chen's radio interview on Studio Plus, Beijing.