Eternity in a grain of sand, heaven in a wild flower ... and revelation of character in a golf ball.

Donald Trump's attempted hostile takeover of China's economy continues apace. The Chinese walked into an ambush when they presented their latest round of changes last week thinking they were still negotiating. Kicked off by Reuters' "exclusive" briefing by "three U.S. government sources and three private sector sources", the media then fell in with Trump and trade representative Lighthizer's narrative that the Chinese "reneged" on a deal that was already sewn up.

With two tweets on Sunday (provocatively, the 20th anniversary of the US bombing the Chinese embassy in Belgrade which killed three journalists) stating he was raising current tariffs on China from 10% to 25%, and planning the same for an additional $300 billion of Chinese trade, the President snapped his fingers and wiped $1.36 trillion from the world economy.

The Economist gives a more nuanced analysis, suggesting that there's more democracy in China's system than you'd think with a politburo that has to sign off on the final agreement. It may be Trump's Thanos dream to snap his fingers and make half the world disappear, but Xi can't do that. He has his own domestic audience to please.


Complicating matters, negotiations have been conducted in English, with the draft agreement (reportedly seven chapters and 150 pages) also in English. As it is translated into Chinese and circulated among more officials, changes are inevitable. “You can’t really renege on something that is a non-binding work in progress,” says James Zimmerman, a partner in the Beijing office of Perkins Coie, a law firm.

So why would China baulk at signing the deal as dictated by the US? They have been making rapid (for China) inroads on outright theft and copyright issues, as they should. But, having once been awash with dosh and not needing foreign capital, they used a barter practise of allowing American firms access in exchange for knowledge in the form of intellectual property (IP) transfer  – which is completely different and smeared as "theft" when these were terms negotiated by the companies in the course of business, and not a government requirement. Looks like The Art of the Deal only goes in one direction.

A major sticking point seems to be the demand that China should undermine its own economic model and no longer subsidise some of its industries, in the same way that, say, the US subsidises its own military or farming industries, for example. What do we think Trump's tax breaks did in allowing US companies to buy back their own stock?

So, double standards aside, China's economic basis is a matter of sovereignty on which China is not going to budge. Trump's China hawks know that. Trump now says he gave US business in China a year's notice to get out, so he knows where this is going and that it was never going to be sincerely resolved. The objective: smash open China's economy, a variant on the "kick their ass and take their gas" that destroyed Iraq and threatens Venezuela, Iran and others.

And do you really want your national wealth subject to a takeover by the same chancers who brought you the 1MDB scandal?

Perhaps this is why we need a World Trade Organisation with teeth so that the rule of law applies to all parties without the biggest one acting as plaintiff, judge, jury and executioner. No wonder he hobbled the WTO; a rule of law that applies to all may not be the kind of level playing field (or golf course) that Donald wants. How can China trust Trump, with his decades-long history of reneging on deals both private and public? Not even Mexico and Canada have escaped the Donald treatment and all his broken promises to remove tariffs.

Trump's subsequent twitterstorm of socialist pledges to use the hundreds of billions that China would pay through his new 'n' improved tariffs to make farmers rich as Croesus and give their produce to the poor was met with 360 degree incredulity. Americans know China doesn't pay Trump's tariffs and this means effectively a tax on their purchases, pushing up the cost for middle America by an estimated $767 per household. That's on top of the swelling national debt burden, up $9 TRILLION to $29 trillion since he took office. 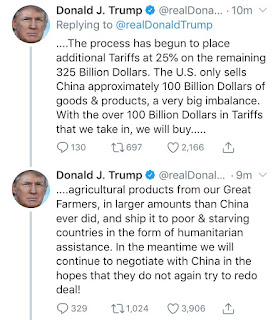 Meanwhile, although an estimated 2% drop in China's GDP from 6 to 4% due to maximised tariffs will hurt, China has the resilience and scale to withstand the assault. It raised 800 million out of poverty and created a huge growing middle class of over 500 million, bigger than the entire population of the USA. No wonder some desperados want it all.

Now all the populists are getting in on the act. Not only Democrat Chuck Schumer, who originally signed off on Trump's trade war tariffs, but, disappointingly, Senator Bernie Sanders. Sanders wants China named as a currency manipulator. This may have been apt a decade or more ago, but anyone who's been paying attention knows that for years China has been depleting its own currency reserves in order to prop UP the yuan. Slipping to 7 or more renminbi to the dollar would lead to capital flight, and is not very sensible for an economy trying to shift to domestic sales and imports rather than exports. If you want to discuss currency manipulation, what do you think Quantitive Easing is? Market forces?

The Democrats have to play ball (but not golf!) in order to stay in the game at the 2020 elections. You'd better get onside, Bernie, because if you challenge Don Caligula's right to China's wealth like Joe Biden has, you too might find Rudy Giuliani travelling to Ukraine to dig up the dirt. Or, even worse, he might sic Attorney General William Barr onto you.

[Edit: Collective amnesia alert ... For decades we've known that the 1% and 0.1% sucked the wealth out of the US and failed to re-invest, hollowing out vast swathes of the country. The top 1% in America own as much as the bottom 90% with the 42 richest individuals in the world owning as much as the bottom 50% of humanity, but you never hear about the 1% any more. China represents a juicy prize as well as a handy scapegoat and a political diversion, all reminiscent of the 19th century Opium Wars and the American downturn in the 1870s which led to the US Exclusion Act of 1882.]

[A final thought ... Motivation, m'lud? China will account for 21% of global trade this year while the US is 7%. China owns $1.13 trillion of America's $6 trillion foreign-owned debt.]

Trump rumoured to be love-child of Captain Queeg and Thanos ... More news as it comes in ...

CNBC Ex-Reagan advisor John Rutledge: Trying to get China to change its economic policy in trade deal is ‘just nuts’. ... "This is not China reneging on the trade deal the last week. This is the hawks taking control, getting Trump’s ear and pushing the trade war off the edge of a table. This is not going to go away.”

China finally gets to defend itself in the FT. "Beijing says Washington changed terms on deal to buy more goods midway through discussions."

BUSINESS INSIDER China made 3 demands to end the trade war, only one of them is legit (sic): Mafia Don's shakedown. Exactly same set up as the 19thC Opium Wars. The US demands China buys stuff they don't need or can't afford, demands to smash open China market for US takeovers. There was no meaningful negotiation. This is why we need a World Trade Organisation to adjudicate.

FT Why China’s role as the world’s shock absorber is changing: How China put the brakes on the 2008 crash. "... despite softening exports, Beijing tolerated continuous currency appreciation. In effect, the rest of the world devalued against the renminbi. Put another way, the combination of an ever-strengthening renminbi and, by international standards, a relatively high inflation rate left China nursing significant competitiveness losses even as others made competitive gains. Had China not performed this role, the world would have faced a far greater crisis. ... China has been the shock absorber for the global economy, a punch bag seemingly able to soak up the recessionary blows that would otherwise have derailed global growth."

TALKING POLITICS PODCAST: Adam Tooze (@adam_tooze ) and Helen Thompson (@HelenHet20) on the US vs China. Calm and insightful but still buys in to the narrative that China changed a done deal at the last minute, which I think The Economist has put to bed. The question remains - Cui bono?

GUARDIAN editorial 10th May 2019: The Guardian view on US-China trade wars: don’t let them get started. The time has come to rewrite the rules so that the world’s largest economies are able to trade peacefully
Posted by Madam Miaow at 5/11/2019 01:32:00 pm No comments: