My encounter with Michael Gove 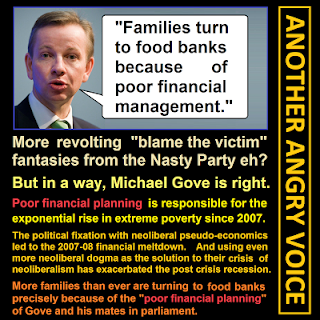 How did someone so intellectually challenged get to be running our education? Michael Gove, a Rupert Murdoch shill of old, may be clever in the same way a performing dog can do tricks but his callousness towards the weakest in society demonstrates that he desperately lacks emotional intelligence, compassion, empathy, generosity and the key qualities that make us fully-rounded humans.

He reminds me of the jumped-up clerks in the Nazi regime who, given power beyond their abilities, used it to persecute the vulnerable and bolster their own inadequacy.

To mark his pronouncement that poor people rely on food banks because they are too stupid to manage their money properly, I am republishing my account of the encounter I had with him a few years back at the ITN studios in Grays Inn Road.

Monday, 12 July 2010
Michael Gove Wanted Me To Powder Him Down

"It was when I was publicising The Best Democracy Money Can Buy", said buxom press-officer Anna Chen, 22, flicking her long tresses out of her almond eyes. Sultry beauty Chen said, "There I was in the Green Room, helping my mate Greg Palast not reflect the light from his very high forehead when Michael Gove, who was there for an 'interview' with our Kirsty, suddenly reached in and grabbed. He'd been coveting the contents of my little make-up bag with his pre-lasered eyeballs for ages. This was back in the day before he got his new hairdo and makeover."

Sinister Gove then asked her to "powder me down".

"Powder me down" is a well-known perverts' term for unspeakable televisual and filmic practices.

"So there I was, trying to beautify the most evil Education Minister this country would ever see like some champion fluffer. All my skills and photoshopping couldn't prettify this ugly little monster."

Ms Chen is deeply regretful. "It's like when they ask you, if you could go back in time and top Hitler before he came to power, what would you do? I wish I'd tattooed the pursed-lipped creep with 'I am a threat to your children' across his fugly mug. To have missed a chance like that is enough to turn you to drink," said the busty Ms Chen, pouring herself another quart of Absinthe with a trembling hand.

The Hothouse Project is now on Facebook and here's what amounts to our manifesto:

Charles Shaar Murray's "Journalism as Craft and Art" writing course is the basis of our alternative education group, The Hothouse Project, featuring the best of the ideals and artistic values of classic counter-culture. We share rigorous, hard-headed journalistic craft, to bring literary quality into even the most mundane journalistic tasks, and offer an inspiring alternative to the flatlining culture, showing you how to inject style and subversion into a timid, conformist media landscape. We'll skill you up, sharpen your claws, broaden your bandwith and widescreen your horizons. Covering writing skills from journalism to poetry and publishing.


Don't worry if you missed this one — there's another one along in the Spring — details to come. Get in touch if you wish to know more or reserve a place.

A walk around the Barbara Hepworth sculpture garden in St Ives.

Another idyllic trip to St Ives making sure I get in my annual soul-food with several visits to the Barbara Hepworth gallery and sculpture garden in St Ives. A magical place. 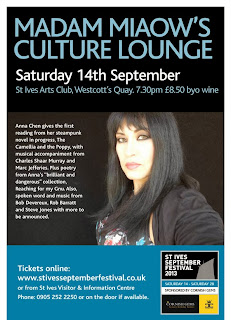 Madam Miaow's Culture Lounge returns to the St Ives Arts Festival following last year's The Steampunk Opium Wars extravaganza that had a cast of thousands and played to a capacity audience of dozens.

This year, I'll read the first chapters of my novelisation of the The Steampunk Opium Wars: The Camellia and the Poppy which I'm having great fun writing. I'm also reading poetry from my "brilliant and dangerous" book, Reaching for my Gnu, published in Kindle and paperback.

I'm joined by the super-talented Charles Shaar Murray and Marc Jefferies, who'll be providing musical accompaniment and, in the case of CSM, reading his work as well.

In case you can have too much of a good thing, the adorable Bob Devereux, very funny Rob Barratt and the divine Steve Jones will be delighting our lovely audience with their spoken and sung words and music.

Should you find yourself in St Ives with time on your hands and a taste for a bit of kulcher among friends, then come and join us for the evening. Tickets should be avaiable on the door if they haven't sold out (this is the festival and that does happen). Advance tickets from The St Ives Visitor Centre, The Guildhall, Street An Pol, St Ives, Cornwall TR26 2DS

Look out for us at the Café Art where Charles Shaar Murray and I will be reading one early evening, exact date to be confirmed.
The Drill Hall,
Chapel Street,
St Ives TR26 2LR

We'll also be reading and playing at Bob Devereux's lunchtime Poetry in the Square sessions in Norway Square. 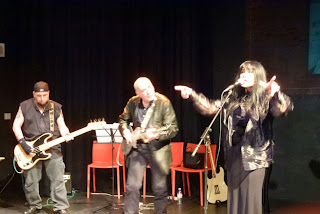