The Windrush Generation: British citizens here before 1962 told "Prove it!" - by George Lee


Today in my inbox I found this tweet from George Lee who tweets as RightIsMight, twitter handle @7_jamdown.

Would YOU really like to know what caused the #WindrushScandal?
Watch this video from JCHRhttps://t.co/DocomGDo49
— RightIsMight (@7_jamdown) October 2, 2018

It's addressed to several parties as well as myself, including Jeremy Corbyn: @jeremycorbyn @sajidjavid @EmilyThornberry @HarrietHarman @UKLabour @Yvettecoop @CarolineLucas @carolinenokes. A small but perfectly formed list, some of whom I hope will respond at least adequately and meaningfully.

The entire Windrush generation should be welcome here. They were invited to Britain to rebuild the country after the devastation of World War II and 1950s austerity. In return for running our NHS and transport they were promised indefinite leave to remain. However, there is an extra toxic twist affecting Commonwealth and Colonies citizens who entered the UK before the 1962 Commonwealth Immigrants Act and who were already guaranteed citizenship by the 1948 British Nationality Act.

As George Lee points out in his article which I've reposted below, 'How does one downgrade someone’s citizenship without it being a retrospective abrogation of their rights? ... if the Real Windrush Generation attempted to claim their rights, they were to be told to “prove it”. ... This action has led to countless unlawful deportations and exclusions and, even worse, the confiscation and wilful destruction of perfectly legitimate and legally obtained passports ...'

In Theresa May's officially sanctioned 'really hostile environment' the Tory government has been destroying passports, the one vital piece of evidence that proves citizenship. When the state itself abandons the rule of law they send out a dangerous message. And that message is being hear loud and clear. 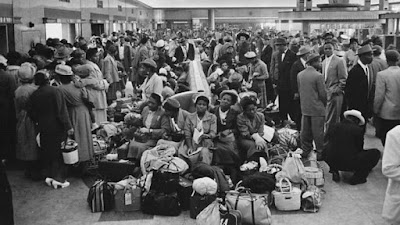 WindRush "Child": IS IT BECAUSE WE ARE BLACK?

It has become necessitous to coin a new maxim, the “Real Windrush Generation”. There needs to be a clear distinction made between pre-1962 Citizens of the United Kingdom and Colonies (pre-1962 CUKCs) and those New Commonwealth citizens who entered the UK after the point in time marked by the entry into force of the Commonwealth Immigrants Act 1962. Without this distinction it is not possible to see that we are considering two separate issues.

Perhaps the Guardian should produce an article which explains the distinction between the Real Windrush Generation (the pre-1962 CUKCS) and the definition given by the government for the “Windrush Generation”, which is in fact a misnomer. The reason for this suggestion is elucidated in what follows.

Quotations used are from the following article:

How does one downgrade someone’s citizenship without it being a retrospective abrogation of their rights? Of the four people mentioned in this article, it can be stated with certainty that at least two of them are Real Windrush Generation and British citizens. When it concerns the Real Windrush Generation, everyone seems to forget that the law exists for all citizens and must be obeyed, even by Her Majesty’s Government. At this point, it ought to be clearly stated that the legislation passed by parliament which establishes the right of all pre-1962 CUKCs to British citizenship is the British Nationality Act 1948.

What is said to be the Windrush Scheme has nothing whatsoever to do with the revocation of the rights of the Real Windrush Generation. I have now made six different attempts to communicate with those responsible for this Scheme, but to no avail. The reason for this situation is clear. One thing has nothing to do with the other.

The Windrush Scheme was set up to deal with persons entitled to Indefinite Leave to Remain, which does not apply to pre-1962 CUKCs. As far as can be ascertained, no authority has been given to deal with matters concerning pre-1962 CUKCs. I have been directed and redirected until I have arrived at a dead end. Moreover, I have been informed that the Windrush Scheme is only for the purpose of assisting the “Windrush Generation”. Is it not ironic that the Home Office should introduce a Scheme called “Windrush” which excludes the Real Windrush Generation? Has it anything to do with the fact that the Real Windrush Generation are British citizens and acceptance is being denied?

The Real Windrush Generation have been making representations to the United Kingdom government for more than 40 (forty) years. Every application has fallen on deaf ears as per the wishes of the legislators, clearly stated in the Immigration Act 1971, as amended by the British Nationality Act 1981. Decisions on this matter have been made in secret and without recourse to the relevant legislation since 1973. This has occurred without any form of accountability since the entry into force of the Immigration Act 1971. The legislation instructed those who were to enforce it, that if the Real Windrush Generation attempted to claim their rights, they were to be told to “prove it”. I use the expression “prove it” because it has been used to me so many times by the Home Office and every UK embassy I have visited over the years since 1988. No matter where the application was made the responses were almost always identical.

This action has led to countless unlawful deportations and exclusions and, even worse, the confiscation and wilful destruction of perfectly legitimate and legally obtained passports, which is another reason it is transparently deliberate action on the part of the UK authorities in order to abrogate the rights of the Real Windrush Generation.

With reference to passports, Lydden Lewis needs to be careful as the UK government do not usually return such passports, once confiscated. In fact, as stated, they are usually destroyed. The evidence is destroyed enabling one to be told, “Prove it!” Every time such decision was taken with regard to pre-1962 CUKCs, was the law broken? Incidentally, the point to note is this. The only passports confiscated and destroyed were the ones which confirmed the rights of the Real Windrush Generation. Thereafter, the legitimate owners of said passports were told they were not citizens, even though the passport seized and destroyed demonstrated their right to citizenship.

To demonstrate the point with another example from the above-named Guardian article. Tony Perry was told, “We are sorry to inform you that you are not a British citizen”. Due to the fact that he arrived in Britain, from Jamaica, in 1959, there is no basis in law for him to be given that information. Furthermore, magnanimously awarding anyone in this situation with a visa giving him or her Indefinite Leave to Remain is an abrogation of rights established under the British Nationality Act 1948. Thus, the actions taken in this case is not just ultra vires, it is unlawful. The assumption is that the Home Office know immigration law, but do they?

Why has the Home Office been permitted to operate outside the law for so many years, with such action being taken in secret and without oversight from those responsible for so doing?

Surely it can be seen that what has taken place is a grave abuse of power which has affected a large number of people? How many? It is impossible to calculate because the number is greatly affected by the date of Independence of each New Commonwealth state.

Most of the people affected are dead, that is the only known factor. It would appear, probably much to the joy of the UK government, as it seems the method by which the “Windrush Generation” may be denied their rights to compensation is a current preoccupation.

This purgatory, which is in effect worse than slavery, must be ended. It is even more important that the condition in which the people referred to above died, becomes public knowledge.

If the government of the United Kingdom wishes to disavow any statement made in this communication, I respectfully request that they state upon which legislation they rely.

No more decisions about the Real Windrush Generation made in secret by people who know us not, and who have been instructed to deny rights given in legislation by the parliament of the United Kingdom.

Just one last question! Is it because we are black?