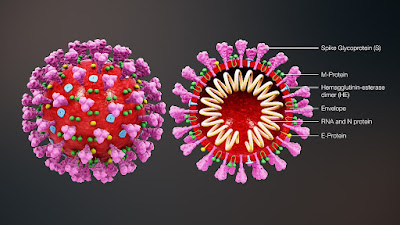 
Very interesting development that a strain of the Covid-19 virus — SARS-CoV-2 — has been discovered in a frozen sample of sewage in Barcelona dating from 12th March 2019, indicating (as some scientists have posited) that the virus was already circulating the world before exploding so virulently in Wuhan in December 2019.

America needs to provide an explanation as to why they were able to brief NATO and Israel about the coming pandemic in November but failed to warn China in the middle of a vicious trade war. (EDIT: The Pentagon now denies this.) In a bonfire of the virus protection measures: Trump disbanded in May 2018 the pandemic team set up by Obama, slashed their Beijing CDC office until no staff remained by July 2019, threatened to pull out of WHO and defunded research. 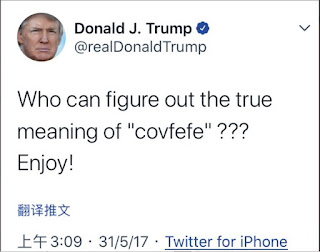 This, of course, means that NATO member Britain was fully in the frame having being tipped off about the virus even before China. However, despite still messing up its handling of the outbreak at home, it is nevertheless prepared to scapegoat China at the behest of the Trump administration. Very noble, chaps. So glad to see we took back control!

To bolster Trump's accusations of tardiness, there are still claims  –  which I thought had long been put to bed – that China suppressed its whistleblower doctors. Of course, early fumbles with the novel coronavirus, and taking less than five weeks from initial discovery to full-on national lockdown and eventual eradication of the virus, can hardly compete in the criminal negligence stakes with America's six months of paralysis.

In a full frontal attack on Age of Enlightenment fact-based science, Trump went medieval on our collective ass. For tales of suppression of doctors, you need only look at the attacks on Dr Anthony Fauci, the World Health Organisation, hospital workers who warn about lack of PPE and scientists working with China in vital research, such as Dr Peter Daszak whose crucial work was defunded. The treatment of the Seattle doctor who realised, "It's just everywhere" in January is a case in point. 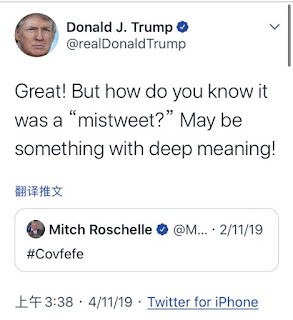 So to clarify the chronology of the virus's discovery in China, the following is gleaned from the Washington Post, Wall Street Journal, Reuters, WHO, Xinhua, Asia Review, Read Passage, The Lancet and others.

An "odd" lung infection is noted in the Wuhan hospital 18th December.

Dr Zhang Jixian sees a sick family 26th December and on 27th December, she reports the unusual pneumonia to her hospital boss and local health authority in Wuhan. The provincial CDC then initiates full scale research at the hospital.

Li sends a private WeChat message warning a group of eight medical colleagues incorrectly that it could be SARS and includes patients' private medical information - from there it goes viral. He is reprimanded by police on 3rd January and told to sign a pledge he won't do it again. (He tragically catches Covid-19 from a patient and dies 7th February.)

The WMHC issues a public notification on its Weibo account on 31st December when CCTV, CGTN and Reuters carry the story.

Same day, 31st Dec, China receives genome results from a commercial lab - the WHO is told (and then formally briefed 3rd Jan). US CDC learn from the 31st Dec reports and begin development reports for HHS on Jan 1st.

2nd Jan the WHO activates their incident management system.

On 3rd January (4th Jan in China), the US CDC chief Robert Redfield talks to China's CDC chief, George Guo. Redfield tells HHS secretary Alex Azar who then tells the White House and instructs his chief of staff to share the Chinese report with the national security council. [EDIT: The Washington Post reports that Azar did not "substantially" inform Trump until 18th January at Mar-a-lago. Azar “assured the president that those responsible were working on and monitoring the issue. Azar told several associates that the president believed he was ‘alarmist’ and Azar struggled to get Trump’s attention to focus on the issue, even asking one confidant for advice.”]

The virus genome is identified, sequenced and shared internationally in record time by 12th January.

EDIT: To be more specific:
2nd January: The Chinese Center for Disease Control and Prevention (China CDC) and the Chinese Academy of Medical Sciences (CAMS) receive the first batch of samples of four patients from Hubei Province and begin pathogen identification.
4th January (3rd Jan in the US): Head of the China CDC George Guo talks over phone with director of the U.S. CDC Robert Redfield about the pneumonia outbreak. The two sides agree to keep in close contact for information sharing and technological cooperation.
5th January: Laboratory test results rule out respiratory pathogens, such as influenza, avian influenza, adenovirus, the Severe Acute Respiratory Syndrome coronavirus, and Middle East Respiratory Syndrome coronavirus, as the cause. The WHO is informed and releases its first briefing on cases of pneumonia of unknown cause in Wuhan.
EDIT: In a Time magazine interview, Professor Zhang Yongzhen says he recieved samples at the Shanghai Public Health Clinical Center on 3rd January and uploaded the sequence to the US on 5th January. "Zhang insists he first uploaded the genome to the U.S. National Center for Biotechnology Information (NCBI) on Jan. 5—an assertion corroborated by the submission date listed on the U.S government institution’s Genbank."
7th January: The China CDC succeeds in isolating the first novel coronavirus strain.
8th January: The National Health Commission (NHC) initially identify a new coronavirus as the cause of the epidemic.
9th January: The NHC make public their discovery of the pathogen, saying a new type of coronavirus has been initially identified as the cause of the viral pneumonia in Wuhan. China informs the WHO who release a statement on progress saying that this unusually fast preliminary identification of a new virus is a notable achievement.
10th January: The China CDC shares with the WHO the specific primers and probes for detecting the novel coronavirus.
11th January: The Wuhan Municipal Health Commission updated briefing on the situation of viral pneumonia of unknown cause.
12th January: The China CDC, the CAMS and the WIV under the Chinese Academy of Sciences (CAS), as designated agencies of the NHC, submit to the WHO the genome sequence of the novel coronavirus (2019-nCoV), which is published by the Global Initiative on Sharing All Influenza Data (GISAID) and shared globally.

China's genuine biggest blunder allows a public banquet in Wuhan to go ahead on 18th January. Local officials are later disciplined and sacked.

Evidence for human to human transmission is confirmed 20th January.

Previous accusations of "crying wolf" over H1N1 Swine Flu in 2009 by the BBC among others: "They [WHO] frightened the whole world with the possibility that a major plague was on the way," means China and the WHO are ultra-cautious until they have scientific proof this time. However, they do NOT rule it out and on 14th January, the WHO tweets that as yet "Preliminary investigations ... have found no clear evidence" of h2h infection. 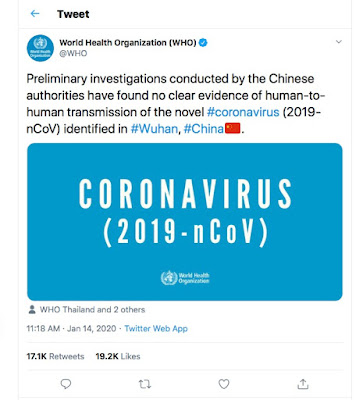 
China reopens 76 days later having eradicated the virus but cautiously leaving the system in place to deal with flare-ups. It had a total of 86,000 cases with 4,653 deaths, most in Hubei.

COVID-19 origin: University of Calgary research shows SARS-CoV-2 may have been evolving slowly since 2013.

The Atlantic: Trump’s Break With China Has Deadly Consequences. After scuttling its partnership with Beijing on public health, the U.S. was unprepared for the pandemic.
Joshua Cho, Fair: No, China Didn’t ‘Stall’ Critical Covid Information at Outbreak’s Start
Posted by Madam Miaow at 7/26/2020 02:11:00 pm No comments: