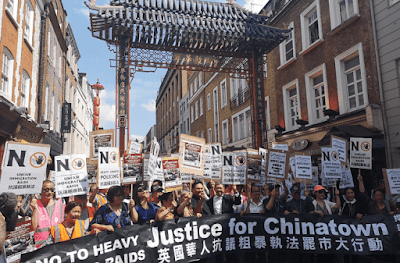 Labour dogwhistles echo Trump protectionism and the spirit of MAGA


Congratulations and a big thank you to everyone who made it to today's protest against the Home Office's aggressive immigrant fishing raids blighting London's Chinatown, called by the London Chinatown Chinese Association. These raids have intensified under the Tories' hostile environment ever since the Brexit vote to the point where shocking footage shows an elderly woman collapsing and almost being hit by a vehicle in a raid on 5th July.

Tellingly, Jeremy Corbyn not only neglected to tweet support to a community under siege, but he chose today of all days to state his opposition to cheap labour from abroad, reinforcing the bogus immigration debate as if this was the key problem facing British workers.

Instead, he launched "Build It In Britain". Not like MAGA, then.


Today I launched our ‘Build it in Britain’ campaign, to revive industry, create jobs and support local economies by manufacturing in the UK, not outsourcing to companies abroad.

He could have argued against companies that pay low wages. However, instead, the implication is that its the phenomenon of immigration itself that is the cause of our economic woes and not any one of a myriad of screw-ups such as Cameron and Obama destabilising the world by military action in Libya, the pound tanking after the EU referendum or even just a predatory, greedy ruling class.

I don't know which double-barreled twit in his team claimed his words were being twisted into Fake News, but recent statements by his mates chart the course of this disastrous anti-foreigner frame of mind, especially when it comes to the Chinese.

A perfect storm has been brewing for Britain's Chinese community: a hostile immigration environment sweeping up east Europeans and Windrush workers alike; the Labour Party's betrayal of the principle of freedom of movement for labour; the increasingly bizarre political scapegoating of Chinese by Paul Mason and fellow left populists. Then, of course, there's Trump whose protectionism against the world, and especially China, is plucked straight out of the Steve Bannon playbook (more on Trump's China trade war in another blogpost).

This has been building for a while. Bereft of socialist ideas to galvanise the opposition into government despite nearly a decade of Tory austerity that's left most of us desperate for progressive, inclusive politics for a change, Corbyn, Seumas Milne et al have chosen Trumpian populism, focusing on foreign workers as responsible for our ills. Think I'm exaggerating? Here's Jeremy's left stablemate, Paul Mason:


You think western democracy can survive another decade of enriching millionaires of China and impoverishing the workers of Europe? I don't
— Paul Mason (@paulmasonnews) June 23, 2018

'Cause China's millionaires are so much more venal than ours ... who've been around for a lot longer. So much for class analysis. Mason has been trying to persuade Corbyn to favour "... a strategy designed to allow the populations of the developed world to capture more of the growth projected over the next 5-15 years, if necessary at a cost to India, China and Brazil ... to save democracy, democratic institutions and values in the developed world by reversing the 30-year policy of enriching the bottom 60% and the top 1% of the world's population". So we're fighting for the 39 per cent, then — for the few, not the many. I like the way he's snuck in the 1% to justify his proposed wreckage of foreign economies.

Here is someone who was prominent in various left parties, including being in the Socialist Alliance press team (where he did very little while I did the work for no pay),  dropping his "workers of the world unite" Marxism for a piece of whatever it is that Trump's got. "It is," he continues in an appalling lurch to the right, "a programme to deliver growth in Wigan, Newport and Kirkaldy — if necessary at the price of not delivering them to Shenzhen, Bombay and Dubai."

Evidently, China raising 800 million out of poverty after decades of low paid labour in suicide factories making our stuff, and following almost two centuries of misery inflicted by the world superpowers as well as their own decaying Qing dynasty, is an unacceptable inconvenience to westerners and nothing to do with the dynamics of capitalism. My major objection came when China was persuaded by the US to join the WTO and suddenly state assets ended up in the hands of the children of top cadre. However, they are where they are. All that pain they went through and now western opportunists want to trash it just as they're getting up off their knees.

The China-bashing is getting ridiculous. Domestically, there's much to challenge but in terms of economy and foreign policy, right now, China and Germany under Angela Merkel look like the only grown-ups in the room — if we're stuck with capitalism until that ol' gravedigger gets going, these are the best. Mason's passionate pleading for plucky little Victoria's Secret against big bad China was puzzling on many levels. I remember when Chinese women were often represented by women in white science coats cuz we were encouraged to use our brains, not our T and A. Today, women in China have to struggle against the sort of shite portrayals of women that white left males crave but should have dumped a generation back: the lingerie company does not represent any sort of liberation. Neither is it some sort of workers' paradise for anyone who knows the company's exploitative history of using child and slave labour, and its terrible sweatshop conditions in Jordan for "guest-workers".

Nearly 20 years ago we held our first Chinatown demo when New Labour tried to blame the UK Chinese for the devastating outbreak of foot and mouth disease, an association of a racial group with filth and pestilence that would make Goebbels proud. I'd hoped that things would be better under a purported socialist but I've been told by Corbyn's friends that there are no Chinese workers in Britain (not even the Dover 58 or the 22 cocklepickers who were lost in Morecambe Bay) because we "all work in catering" and are therefore all "petit bourgeois", and that it's "British workers who count".

As Catherine Stihler, co-chair of the Scottish Labour for the Single Market group, told the Independent: “While some voters are angry about immigration, it is the job of the Labour Party to challenge anti-immigrant sentiment and promote the benefits to our economy and public services.”

Freedom of movement for labour has long been a crucial left credo, a counterbalance to the freedom of capital to chase cheap labour across the globe. Thus, when James Dyson's cleaning technology proved to be so massively popular, he closed down the Wiltshire factory and moved it to Malaysia for all that loverly cheap labour. We wouldn't blame Malaysian workers for Dyson's decision but it's Dyson who gets the CBE and the knighthood while the foreign workers get the vilification.

Trump's trade war with China could easily slip into a hot war as some of Trump supporters seem to want. One nuclear superpower in Thucydidean conflict with the upstart power. If that happens, none of us will be  immune from the fallout.

Here at least is one welcome message of support for today's demo.


We stand with the Chinatown community as they strike and protest against immigration raids!


Today, China is being scapegoated for "impoverishing" the global working-class. Eighteen years ago, New Labour was blaming UK Chinese for the foot and mouth disease outbreak that Blair's government had abysmally failed to deal with. I was twice blasted out of the blue by the pro-Iraq War Ipswich Labour MP: first time for joining the Labour Party to support Corbyn (I've since departed), the second at a party where he ranted at me at length about "iniquitous Chinese" and their death penalty ... which I oppose, by the way, but that made no odds, my Chinese face being my guilty scarlet sign. The Labour Party has failed to uproot their prejudice against Chinese people and it's getting worse. Anti-Chinese racism — the one you can get away with.
Posted by Madam Miaow at 7/24/2018 06:20:00 pm 1 comment: