The Sleep of Reason Produces Monsters from the West's Own Id: No Cold War on China 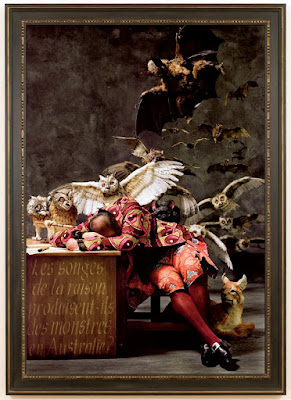 This worsening situation has been building for years until it’s almost set like concrete. It feels like Westworld with Chinese people cast as the robot hosts who the guests can do anything to and no-one says a thing.

The people who brought us AUSTERITY, then sold us BREXIT on the promise of a trade deal with China beyond the dreams of avarice, are the same Empire Crusaders who now want a war with it:
* The Tory establishment allowed Covid-19 to take hold, killing tens of thousands,
* have busted the country,
* agreed to rip out billions-worth of 5G and communications infrastructure for no reason except to please America,
* and now want to spend any remaining treasure and lots of debt, on a war on our global lifeboat – a nuclear power — while raking in profits from the Covid industry they’ve helped create.

China is the newly rich kid who’s strayed onto mafia turf and is about to be rolled.

I first realised that China was the likely end game in the Project for America in the 21st Century, in 2005, watching Dubbya Bush standing in the rubble of the Iraq war and declaring China to be a competitor.

America’s wars since carving up YUGOSLAVIA have been like ticking off boxes in a steady stream of horror: Iraq, Afghanistan, Syria, Iran, Libya, Venezuela, Bolivia and now Cuba – not forgetting YEMEN where British and American weapons are killing people even now. China is the big prize at the end of their list of imagined foes.

President Carter told Donald Trump that the reason China does well is that it doesn’t have wars and invests so much in the country - unlike America which has barely had a period when it hasn’t been at war, spends 20 times more than China on its military, and starves the US of investment.

In America, the top 0.1 per cent own as much as the bottom 90 per cent. Poverty is rising, health, education and housing are getting worse. The billionaire class have sucked America dry and they’re now eyeing up covetously the juicy growing market that is China.

China has raised 800 million out of absolute poverty, created a growing 550 million-strong middle-class, bigger than the US, and no squat toilets. That’s triggered enormous fear, loathing and jealousy.

Just as China draws level with the superpower hegemon, as predicted by a slew of Thucydides Trap articles in the mainstream media, instead of cooperating to stabilise the world and float all boats on a rising tide, America is using whatever it takes, every dirty trick, a wall of mud thrown at China to see what sticks.

A RAFT OF DODGY DOSSIER SLANDERS in the US hybrid war on China includes:

* So-called INTELLECTUAL PROPERTY THEFT and Trump’s aggressive trade war kicking off his mafia shakedown, supposedly justified by a large TRADE DEFICIT (it’s actually a surplus of over $20 billion if you include profits from in-China services: Apple, Microsoft, Ford, Nike, McDonalds, Starbucks, and vampire squid Goldman Sachs and so on);

* CURRENCY MANIPULATION when China actually used huge amounts of its reserves to PROP UP the yuan (what’s Quantitive Easing and FED interference?);

* The attempt to take back HONG KONG, exploiting grievances using US NED-backed rioters issuing daily beatings (mostly of women and elderly men), burning, killing. No-one condemns this violence or even acknowledges it’s been happening. I have directly witnessed how, if you have a Chinese face and you’re not servile, no abuse is too much.
Remember it is ONE SOVEREIGNTY, TWO SYSTEMS, not two sovereignties.
China-bashers always omit the final six words of the key clause in the 1984 Sino-British Joint Declaration: that HK would enjoy autonomy EXCEPT IN DEFENCE AND FOREIGN AFFAIRS. (No rioters were killed by police in HK, but 1,004 people were killed by US cops in the same year - there were more rioters killed by cops at the storming of the Capitol than in a year of HK violence);

* The SOUTH CHINA SEA where Vietnam and others started the practise of building up rocky outcrops into islands – China was a johnny-come-lately. Three years after Obama’s aggressive pivot to EastAsia in 2012, Xi offered not to militarise the islands. Obama’s response was to pour in even more military on top of the 400 US bases surrounding China;

* And XINJIANG. Having surrounded China with missiles in its Pacific backyard, the America axis now focuses on China’s land route following the old Silk Road to Central Asia, the Middle East and Europe – which goes through Xinjiang.

In its WAR ON TERROR, America killed millions of Muslims, displaced 37 million people. It supports 2 million Palestinians trapped in Gaza for 14 years, has nothing to say about Kashmiri Muslims, it destroyed Iraq and Libya.
Out of all the Muslims in all the world, the West now really, REALLY cares about Uyghur Muslims.
How on earth is doing to Xinjiang what they’ve done to Iraq, Libya, Afghanistan and Syria supposed to help Uyghurs?

* CORONAVIRUS IN THE UK. All the disinformation ignoring how China identified, sequenced and eradicated Covid-19 has set like concrete to our detriment – we are paying for America’s geopolitical games with our lives.

In March 2020, the White House sent a cable to State Department officials, issuing "guidelines for how U.S. officials should answer questions on, or speak about, the coronavirus and the White House’s response in relation to China." And it’s ugly. The resulting NEWS BLACKOUT in the US and the UK has meant us constantly reinventing the wheel as more of us sicken and die, instead of learning from the Covid-19 roadmap that China drew from hard, painful experience.

When have you ever seen a measured public debate with judicially verifiable evidence? Where is the right of reply to these claims in the mainstream media?

America has an army of “psychological warfare officers” pumping out this stuff which the mainstream news platforms regurgitate and refuse a right of reply, all manufacturing consent for war in the interests of AMERICA FIRST, devil take the hindmost.
It is a hugely funded operation: billions of dollars, thousands of officers, decades of PSYOPS, all dedicated to “using information and misinformation to shape the emotions, decision-making and actions of American adversaries.”
And that also means mugging off us, the public.

SINOPHOBIA
One major block to a concerted effort to counter the destructive actions by the enraged geriatric superpower in decline is sinophobia.

It’s deeply embedded, and has its roots in the devastating OPIUM WARS of the 19th Century when the British forced cheap, mass-produced opium grown in Bengal onto China at gunpoint, turning what had been an expensive, aristocratic vice into a nationwide addiction. The INDUSTRIAL REVOLUTIONS of Britain and America were financed by the Opium Wars and the pillage of India, Asia and Africa.

So now, just as China has crawled out of the wreckage of nearly 200 years of wars and wealth extraction, China has been very effectively turned into dark mirror of the West, by the West.

How has this feat of magic been achieved, turning 1.4 billion human beings into pariahs in the Anglosphere? And why are some of us going along with it?

You may have noticed that Chinese people are practically nowhere to be seen in Britain – no household name pundits on platforms, no newscasters, few actors you could name, no Chinese in Eastenders, not in politics, or the arts.

Absence of representation in the culture dehumanises Chinese people, turns us into a blank canvas you get to haul out of a bottom drawer whenever the forces of reaction need projection and deflection of their own sins: our enforced invisibility means Chinese are a permanent reservoir of scapegoats.

And that reservoir is being tapped to the max.

To believe such crazed, lurid depictions of the Chinese as sexually sadistic Yellow Peril, Fu Manchu villains relies on an innate unchallenged racism. Dark forces have given the world permission to hate and it’s interesting to see who has been standing up against it … and who has been going along for the ride.

If the sleep of reason produces monsters, we’ve been flooded with monsters from the Western id to fill the vacuum. It’s in our own interests to do the revolutionary thing, make visible the invisible and work together on Covid, on climate change and the global economy.

How China's role as shock absorber saved the global economy from America's catastrophic 2007-8 crash by allowing global currencies to devalue against the yuan despite China taking a huge economic hit. Along with buying a third of US debt, this set off the longest bull-run ever in US markets.
Posted by Madam Miaow at 1/13/2021 09:41:00 pm No comments: