When is a dress just a dress? American teenager's Chinese prom dress and cultural appropriation

Anna Chen writes in the Guardian, An American woman wearing a Chinese dress is not cultural appropriation

When is a dress just a dress? Remember those photos of the little cocktail number that looked blue with black lace to some and white with gold lace to others when they were in fact the same frock? American teenager Keziah Daum now possesses a prom dress with similar magical properties, and it’s landed her in hot water with culture pedants.

The attraction of the qipao (“cheongsam” in Cantonese) is obvious: a sexy, figure-hugging sheath of silk with a high mandarin collar balancing a va-va-voom flash of leg via a thigh-high slash. Its beauty, however, turned into a curse when photos posted on social media of her wearing her beloved vintage find made her a target for tens of thousand of tweets accusing her of cultural appropriation. That’s one heck of a fashion crime.

The original complainant’s instinct – to draw a line at a time when Chinese people are under siege from Trump-inspired China-bashers – is understandable, but in this case, completely mistargeted. If anything, the qipao represents power and class, not race, and certainly not the culture of some exploited underclass.

The qipao’s history is said to have originated with the Manchu Qing dynasty, when members of the Han population they ruled were forced to wear a loose version of the one-piece instead of their own traditional clothing. Created in Shanghai in the 1920s, when warlords ran vast swathes of republican China, the slinkier form of qipao was a fashion favoured by one ruling strand of Chinese society that we associate with Chiang Kai-shek’s nationalists, who fled to Taiwan when the communists won their revolution in 1949 and ditched the bourgeois qipao for Mao suits. Some even detect a western influence in its hybridisation, meaning the current outcry could be compared with taking offence because someone in Asia wore a tuxedo.

At its core, the identity debate is about power: who has it, who’s lost it and who’s chucking it around with abandon. This is hardly a case of a white American dressing up in a fringed chamois tunic with a feather headdress, mocking the indigenous people their antecedents almost wiped out.

At least Keziah wasn’t tip-toeing around to mimic bound feet in a play set a millennium before foot-binding became a thing in China, as in perhaps the most absurd example of cultural appropriation I’ve witnessed. In More Light at London’s Arcola Theatre several years ago, seven white actresses played Chinese concubines buried alive (allegedly) with China’s first emperor, Qin Shi Huang, who died in 210BC. Wearing kimonos (Japanese) and sticking chopsticks in their hair (!), this was a prime example of badly executed appropriation. Unlike Keziah’s appreciation.

When cultures meet and mingle, they inform and enrich each other. I can wear tartan, wear pyjamas, knock up a curry, curl my hair, cry along to the blues and dance to funk. I know the difference between a schmuck and a schlemiel. I’ve sat shiva for a friend’s father. I love gefilte fish. Does this make me a cultural appropriator?

The whole cultural appropriation debate is in danger of being turned from a defence of minorities under the colonialist cosh into a lazy substitute for real political power. How has it degenerated to the extent that we’re now on social media mobbing teenagers whose only crime is to consider a Chinese dress beautiful? Qipao-gate this isn’t.

With President Trump and his acolytes pumping up yellow peril fears around China, and his trade wars threatening to slip into hot wars, the last thing we need is this trivialised pastiche of serious debate. Minorities have precious little ammunition with which to challenge tribal juggernauts. Don’t waste what little cultural and political firepower we have.

Keziah was neither stealing power nor claiming ownership. And she looked lovely.

Here's me wearing the cheongsam from my solo show Suzy Wrong Human Cannon (Edinburgh Fringe Festival), at the ICA in London for a performance of Bondage Pic by Grace Lau. 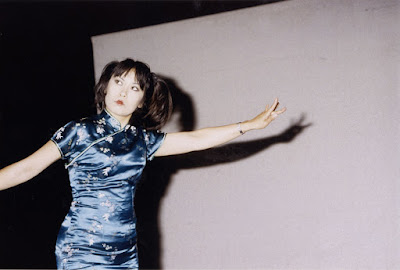 EDIT Here's a taste what we're thought of in Britain and pretty much generally in the western Chinese diaspora:

The Opium War by Julia Lovell book review: Smoke and mirrors and barely disguised disgust for the Chinese.

What happened when the Tony Blair government tried to blame the catastrophic outbreak of Foot and Mouth Disease on the UK Chinese.

For a minority to be truly part of British society you have to be visible, otherwise you're a blank canvas onto which the dominant group's inner demons can be projected. The Chinese British community finally say no to yellowface when the Royal Shakespeare Company does The Orphan of Zhao.

Similar controversy when London venue The Print Room produces a yellowface In the Depths of Love and then performs like a contortionist to make their risible excuses leaving most of us aghast and laughing in disbelief.

Sinophobia and Copenhagen: open letter to the Guardian's Mark Lynas. Right now, Germany and China lead the world in green energy policies while Trump pumps fossil fuels, even contriving to leave the Iran nuclear agreement on dubious grounds which is sending the oil price rocketing — $71 at time of writing, expected to go over $100 for the next three years. Great for Texas ...

... and Canada is currently sitting on the planet’s second largest oil reserves which it plans to release into the markets and the atmosphere, and is the first Kyoto signatory to renege on the deal. China is sticking to the Paris accord despite Trump pulling out the US.

To "trump" it all, we're even excluded from debates about us: Laurie Penny excludes woman of colour from debate about representation of women of colour
Posted by Madam Miaow at 5/04/2018 05:48:00 pm 3 comments: