PARTYGATE: another day, another diversion from 176,000 Covid deaths in the UK 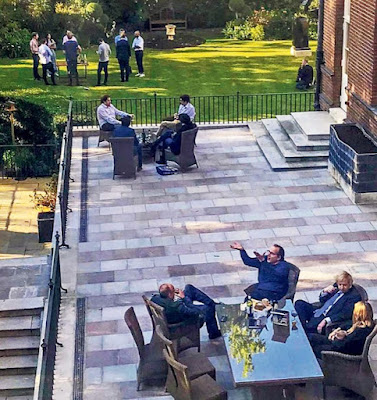 UK frogs still being boiled slowly as the government declares Covid-19 to be endemic and ends restrictions.

So was it negligent homicide, homicidal negligence or mass murder? No, it's worse: attending parties during lockdown.

It may have been illegal under their own rules, selfish and hypocritical while people were dying, but the charging elephant in the Downing Street garden party is the mainstream media's news blackout on how China eradicated Covid by day 43 of its unprecedented 76-day lockdown of 23rd January 2020.

With a Bannonesque "flooding the zone with excrement" (to put it politely), and the robust instigation of a two-minute hate on the new Goldstein figure after evuhl Ruskies and Muslims fell from the Number One bogey-man spot, Brits were denied China's hard-won roadmap that enabled them to reopen their economy with only outbreaks to stamp out.

Instead, we find ourselves reinventing the wheel over and over, heading into the third year of an avoidable pandemic, no longer even pretending to fend off a virus that is clearly NOT flu and which has not done mutating because it now has an entire population as its playground. Rather than starving it to extinction in a properly-run quarantine by denying it the hosts it needs to survive and reproduce, the state has birthed a Covid industry. Yay, lucky shareholders. Congrats to the power-grabbers.

We've now had 176,000 UK Covid deaths (within 60 days of infection) with growing numbers of children added to the list. In the same period, China has had fewer than 5,000. But still the constant refrain, "China baaaad".

How's this for coincidence?

Boris Johnson mirrored much of Trump's super-spreader policy and cut the legs out from under our defences, closing the UK's pandemic team within days of entering Downing Street as Prime Minister in July 2019, the same month that Trump shut the US CDC's Beijing office that was supposed to monitor new diseases after he'd already dismantled the White House pandemic team.

The US in 2019 was filled with events we can see retrospectively as suspected Covid-related, such as the mysterious summer vaping deaths whose X-rays showed the same glassification of the lungs that would later characterise Covid cases and occurred no-where else in the world; the Fairfax Care Home outbreak, 30 June; the Johns Hopkins Event 201 tabletop pandemic exercise starting 18th October, same day as the start of the Wuhan Military Games; 106 Red Cross Blood samples taken December 2019-January 2021 which indicate Covid in the US from at least August 2019; the Pentagon's November 2019 pandemic briefing of NATO and Israel, reported by ABC News and the Times of Israel but since denied. A wealth of prima facie evidence you'd think deserving of investigation if only to eliminate it from enquiries.

Trump's own National Security officers briefed him in detail about the deadly pandemic on the 28th January 2020 and yet he played down the virus, denied its existence, called it a hoax, stigmatised masks, held massive unmasked rallies, pirated PPE from other countries and his own blue states and recommended bleach.

The same inaction at the top froze any effective response to Covid in the USA and the UK for nearly three months after the 31st December alarm was sounded by the Wuhan Municipal Health Commission and carried by the news agencies. As the virus continued to seed itself in the US and UK populations, vast amounts of money would be made.

In March 2020, Trump's inevitable U-turn under the weight of death was accompanied by a State Department cable instructing US officials to blame China for Covid-19 (see The Daily Beast, Independent and Politico).

The UK, and latterly Australia, behaved as if they'd been receiving the same instructions.

Attending parties during lockdown is small beer when the government pauperised us with a devastating no-deal Brexit, allowed Covid to rip, killing 176K Brits, and compounds their crimes by dragging us into World War 3 against our global lifeboat, the world's growth engine that also happens to be a nuclear power.

China sustained a massive hit to its economy and supply chains in order to prioritise the protection of its population, not to mention buying the rest of us time to act. Johnson has done the opposite: sacrificing public health in order to protect (mostly) private and corporate wealth.

To think it all started with a £350 million per week promise on a red bus and ends with an Opium Wars 2 shakedown of the US's upcoming rival by some of the same imperial powers that profited from the West's narcocapitalist atrocities the first time round in the 19th century.

The Brexit and Covid phases are now done. Boris Johnson served the US well but he dragged his feet over ripping out our Huawei 5G infrastructure costing us billions and, although he's gone through the motions with his military willy-waving off the coast of China, it seems he has little real appetite for war.

So Richie Sunak and Dominic Cummings deliver the coup de grace despite their leading participation in this nightmare because it's time for the next Prime Minister to enthusiastically smash the kneecaps of America's talented rival and lead the charge to war with the superpower. My bet is on Starmer, considering the snarling China-hate that emanated from his recent shadow Foreign Secretary, Lisa Nandy, and David Lammy's promise to Obama last month: "We need to get back to being a consistent, reliable partner that puts values and human right (sic) at the centre of our place in the world", reading "human rights" as the usual euphemism for "our might is right".

The media need to examine their own part in keeping the public in the dark, why they did it and what their objective is, because it's looking more and more as if the USA's geopolitical agenda is far more important to this government than the safety of its own population.

Some of the science information ignored by the mainstream media, obliterated by a campaign of distraction and hate

Richard Horton in The Lancet 28th March 2020: COVID-19 and the NHS—“a national scandal”

Joseph Wu in The Lancet 31st January 2020: Nowcasting and forecasting the potential domestic and international spread of the 2019-nCoV outbreak originating in Wuhan, China: a modelling study

One World, One Fight: international, multilingual online resource set up by Alibaba