Anna Chen's latest poetry collection, Chi Chi's Glorious Swansong, was published 2021 by Aaaargh! Press.
‘This marvellous collection builds like a symphony, from its opening dances through the surf of language and ideas to the breath-taking cross-channel swim of “Tinderbox plc”. Assured, funny, angry, exhilarating … Chi Chi’s Glorious Swansong demands to be read; demands to be listened to. A triumph.’
ALAN MOORE (creator of Watchmen, V for Vendetta, Jerusalem, Batman: The Killing Joke, Promethea.) 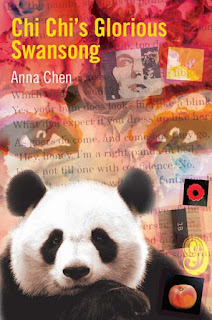 Saturday 13th May 2017: I'm a Special Guest at the China In Context storytelling night for China Exchange where I will read a short story and poetry. Details to come.

The Bookworm Literary Festival of China invited me over to read my poetry and give talks on various topics including the Chinese diaspora in March 2015. I gave my illustrated talk, Anna May Wong Must Die! at Chengdu, Ningbo, Suchow and Beijng for the festival and had a wonderful time. Interview with Beijing Radio Studio Plus here.

I'll be giving a talk and reading poetry in Liverpool on Wednesday 18th June 2014 for their China Day. More details here. http://www.soundagents.blogspot.com/

Wednesday 21st May 4pm, another China Diaspora in Britain talk for USC students in Bloomsbury.

Margaret Thatcher Died at the Ritz

From Tuesday 15th October 2013 Anna presents, Madam Miaow Says, a new season of radio programmes for Resonance 104.4FM. It launches with "Oh Other, where art thou?" looking at yellowface, black face and ethnic minority representation in UK culture. Anna's poetry may feature.

Anna teaches her "Poetry Against the Cuts" class at the Wigan Pier Workshops held by The Orwell Prize. October 9th 2013.

Anna read at the May Day celebrations in The Good Ship in Kilburn, London NW6. Also appearing were Sean Taylor and a storming Attila the Stockbroker.

Friday 15th February 2013. Anna reads poetry at the Save Friern Barnet Library occupation accompanied by Charles Shaar Murray on guitar. Now that the community has won the library back for a few years, we're back there for the cabaret on Friday.

LATEST: Performed The Steampunk Opium Wars to a packed St Ives Arts Club at the St Ives Arts Festival on Tuesday 18th September 2012. With Charles Shaar Murray, Buffalo Bill Smith, Louise Whittle, Paul Anderson, and Bob Devereux. Followed by a Madam Miaow’s Culture Lounge cabaret of poets and musicians where I read from my collection of poetry, Reaching for my Gnu.

Anna's first poetry collection, Reaching for my Gnu, is published in paperback by Aaaargh! Press in 2012.
"Brilliant and dangerous ... an unerring sense of history uniquely coupled with a perception that's as topical as tomorrow."
MICK FARREN 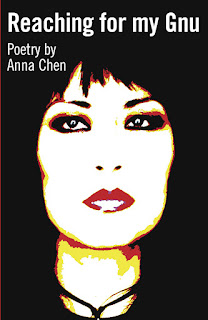 Videos of the St Ives Arts Festival 2011 where I debuted "Kicking A Dinosaur" and "Big Society: on a conversation at the Foundling Museum".

John Paul O'Neill invited me to be a guest poet at the Farrago Summer Slam August 2010 (above). I enjoyed it enormously as the audience is always lively and welcoming. If you are a poet this is a great event to try out your material or watch the talented array of poets strutting their wondrous stuff.

I like to try out material at Bob Devereux's Literary Festivals in St Ives, Cornwall. Again, a very warm crowd. Recommended.

Elsewhere, some pix of Suzy Wrong — Human Cannon, the solo show I took to Edinburgh.

Anna Chen hosts an evening of poetry, performance and 'tongue-in-cheek Chinoiserie' in The Steampunk Opium Wars, an evening of satirical events themed around the Opium Wars -part of the 'Traders Unpacked' series of events celebrating the launch of the National Maritime Museum's 'Traders: The East India Company and Asia' gallery. 6.30-10pm Thursday 16th February 2011

Anna performs at the lunchtime Norway Square sessions at the St Ives Arts Festival 10 – 25 September 2011. Anna May Wong Must Die! as a work-in-progress at the New Diorama Theatre near Euston in London as part of the week-long In The Mirror event: Thursday 10th and Saturday 12th November 2011. Plus two more radio commissions for BBC Radio 4.