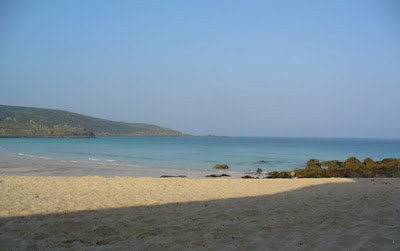 Twenty-five steps from front door to beach. Not so good in the event of a tsunami, but perfect for rolling out of bed and straight onto the sand with a mug of tea, gazing out to sea in the early(ish) morning light. This was my view for the past two weeks.

Just returned from St Ives, Cornwall, and settling back into the real world, or at least what we laughingly call real. If you ask me, the sensation of being in touch with one's self is a lot closer to real than dogs who do tricks at the crack of a whip which is how I feel as soon as I pass Reading coming back on the M4.

Listening to a live performance of Philip Glass's "Strung Out" violin solo by Peter Sheppard Skaevard in the huge acoustic soundbox of the Tate Gallery Rotunda, unforgettable noises which reach right into your belly and stir you around, while watching the sun go down over Porthmeor Beach and the Clodgy, fluorescing pinks blues and grey, with everything motionless except for wheeling seagulls and someone's washing rippling in the wind outside the old people's flats; contemplating the huge granite rock in the distance that marks Clodgy Point, unmoved, permanent, vibrating, in my consciousness, anyhow, at the same frequency as the woody, grainy notes of Neil Heyde's cello: that's what I call real.

Think that's middle-class? Well, while British revolutionaries take skiing holidays and get all gooey over opera while telling the rest of us how to be working-class, they might recall that's what socialists and humanitarians of all stripes have always struggled for - to ensure that everyone has access to soul food that restores the humanity stripped from us under capitalism, and maybe one day regard it as the norm, not a once-in-a-blue-moon treat. I assume that's why the Bolsheviks laid on talks about Shakespeare in vast stadia for illiterate peasantry in the fledgling soviet state before the bureaucrats took over.

I did a comedy set at the historic Arts Club for their Kulture Brake evening, possibly making me the first ever stand-up comic to grace their stage. I see I was billed as an "artiste" with an "e". Makes me think of someone who performs in sequins and tassels and pasties. Although, being St Ives, they'd have to be Cornish pasties. Driving the seagulls wild with lust and desire, I'd be St Ives's own Tippi Hedren. And be shat on a lot. So what's new, kittykat?
Posted by Madam Miaow at 9/24/2007 05:20:00 pm

I love St. Ives... I love the beach, the sunlight (so many artists loved the place), Tate Modern and the best cream teas...ever...

Wish I was there at the moment (even with lousy weather) as the leftie blogworld is steeped in Respect, Respect and Respect...oh, and Respect..

Cream teas, definitely. We currently have a freezer stuffed with clotted cream.

Ah, yes, "respect". Adding to the gaiety of the nation.