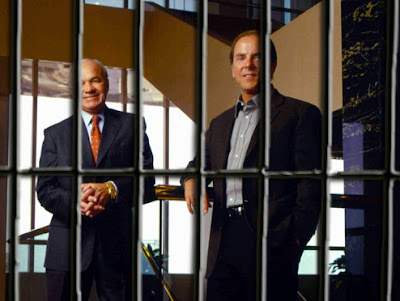 Last night I watched The Shock Doctrine followed by Enron, The Smartest Guys in the Room on More 4 in a truly wrist-slitting binge of disaster telly from which I am only now recovering with a mug of Earl Grey.

The main thrust of The Shock Doctrine, based on Naomi Klein's disturbing and brilliant book, was that the public sphere is being raided by private business using the shock of disasters — man-made and natural — to steal everything that isn't nailed down and privatise every aspect of our lives.

With his assertion that democracy goes hand in hand with the liberalisation of national economies — smashing them open for corporate raids leaving the population impoverished in order to further fatten an already bloated super-rich — neo-con guru Milton Friedman and his Chicago School of Economic hell looked like the very devil.

This embodiment of evil was happy to see democracy in Chile destroyed in the 1974 coup and General Pinochet installed through murder, torture and the rest of the tyrannical repertoire taught in the notorious School of the Americas in order to secure profits for American companies. And yet, ten years after implementing Friedman's economic wet dream, Chile was facing bankruptcy. The one industry Pinochet never dared privatise — the Chilean copper mines — ended up bailing them out providing 85% of their income during the lean years.

Despite this failure of their theory in practise Chile became the model for the neo-cons' destructive swathe through human society in the 1980s under Reagan and Thatcher, and continues today with the rape of Iraq and the ethnic cleansing of New Orleans following Hurricane Katrina.

I was trying to work out why Naomi Klein had her name taken off the credits and distanced herself from Michael Winterbottom's sprawling film. Harpy Marx thinks its something to do with too much narration, but there are other problems, too.

The film should have fed the throughline but there was so much contemporary footage, with an emphasis on visual spectacle (or shock) rather than film that reinforced the thesis, that it became flabby and ended up distracting from the central story. I felt Winterbottom was himself dependent on too much shock and had lost faith in the story he was telling. Using footage of Naomi's lectures was a cheeky way of getting her to narrate despite her protestations.

According to Channel 4, Klein felt the film " ... did not carefully lay out the thesis or explain the economics but instead made unproven assertions".

The ironically titled Enron: The Smartest Guys In The Room was a fascinating tale of hubris and the brutality of Friedman's capitalism given full reign. So sociopathic was the corporate greed practised by Bush favourite Ken Lay, Jeffrey Skilling and their trader hordes that the misery produced by a year of deliberately "rolled-out" power cuts in California was a source not only of undreamt of profits, but of lurid merriment for the perpetrators as caught on tape. (After each power cut the price of electricity soared, enriching the company way beyond the mere provision of energy.)

Extensive footage of Jeffrey Skilling giving evidence, Ken Lay's golden boy genius and a man too smart by half, was a mesmerising sight. Skilling was a blue-eyed picture of deceit, a classic Central Casting corporate villain, while the others looked merely pathetic when stripped of their power and wealth.

In the business of making money when they should have been providing energy, they spent years artificially inflating Enron's stock with the direct connivance of banks willing to kick in the odd $25 million at a time, the lawyers and the creative accountants. Once the game was up Skilling was the first rat to flee the sinking ship, skipping out only four months before the collapse and taking millions with him. Ken Lay took out $300 million while telling his traders and employers what great shape they were in; a real shark fight.

In their fight to deregulate the Californian energy industry and make it ripe for plunder, Enron successfully ousted Governor Gray Davis and put in their own man, Arnie. So let's keep our eye on him.

Skilling got 24 years while Ken Lay died before beginning his lengthy prison sentence. So there is some justice but we still have the Governator.
Posted by Madam Miaow at 9/02/2009 10:59:00 am

I am annoyed I missed the Enron programme as it was on late and I was already nodding off.....

The Shock Doctrine packed so much in one hour and 45mins, I mean, you could spend that time on just one aspect of disaster capitalism. It was fascinating seeing how the nasty horrible vile Ewan Cameron with his hideous MKULTRA experiments led to the School of the Americas in turn led us all the way to Gitmo.

The ending of The Shock Doctrine was utterly weak.

The doc also made me think of David Harvey's Brief History of Neoliberalism which is a brilliant bk.

I'm sure they'll repeat it, Harpy. It made a great double-bill back to back with Shock Doctrine.

C4 couldn't have been too pleased with Winterbottom's film as they consigned it to the doldrums of More 4 instead of giving it a terrestrial outing first. Straight to DVD, as they say.

MM - thanks for reviews - i missed the programs. ENRON does seem the barmy consequence of ultra capitalism. When power companies start engineering power cuts, you know the system's become dysfunctional. Do you think the showing of these programs is part of a sign that things are swinging leftwards? Last week I saw a snippet of James Murdoch doing his Gordon Gecko turn and thought it very unconvincing. So 1980's.

Obama's economic advisors are mainly from the University of Chicago (Friedman).

If I remember correctly, Gray Davis was ousted after Enron collapsed. People were mad at him because of his spineless behavior towards the power companies during their manufactured energy crisis. What's more, when he was in the state legislature Davis voted for deregulation of the energy industry, which made the crisis possible in the first place.

Of course, Schwarzenegger is no better than Davis.

Renegade Eye: 'Obama's economic advisors are mainly from the University of Chicago (Friedman)'

Indeed.And that is sometimes forgotten.

'Obama's economic advisors are mainly from the University of Chicago (Friedman)'
Renegade Eye - i'd appreciate more detail on this if you have time: which advisers and how closely are they tied to Milton Friedman's economic doctrines?

Hi Will — I'd like to think that the screenings mark a change in the collective consciousness but I'm also aware that they were shown/buried on More 4 (cable) rather than terrestrial Channel 4. By the time we're all aware, it'll be too late to do anything. This situation only reinforces the revulsion I feel about the sections of the UK far left who chased their careers while Rome burned. (They acknowledged in 1997 that there would be a limited window of opportunity following the Blair election when we'd be able to build a viable left.)

Renegade, that's too horrible to contemplate.

Spanish Prisoner — thanks for the clarification. I was actually feeling some sympathy for him before I read your comment. Davis was a wimp and Californians paid the price.

i was looking for your story on here and your webpage. Donde esta? Yo quiero leer!

Bit late, but a while ago I wrote a summary of The Shock Doctrine.

please pass it along to others if you find it useful

Alexander, thanks. I've added your blog to the Political Punditry links in the sidebar.