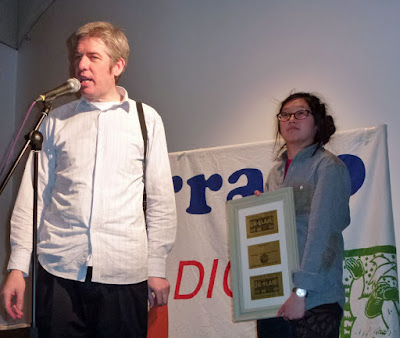 The UK Slam Championships last night was one of the best Farrago Poetry events I've been to. It was an honour and a pleasure to have been asked to judge, along with Charles Shaar Murray, by Farrago founder John Paul O'Neill.

The Slam contest is interspersed with guest feature poets. I read from Reaching for my Gnu, clutching my actual analogue paperback collection of poetry for the first time. Also performing were Cherry Smyth, Vrouwkje Tuinman, Keith Jarrett and Deanna Rodger (who prompted one of the funniest love-poems ever from the Wizzard of Skill).

The first round was so difficult. We had to select from an initial 16 poets who had three minutes each to impress us with their content and recital skills. Seven of these plus three who'd already won their local heats went into the next round where five judges had to use score cards Olympic stylee to whittle it down to five. Then the final round — and that was hot.

It was a bloody marvellous win for Stephanie Dogfoot who is consistently brilliant — she won the Farrago History Slam at my Steampunk Opium Wars event at the National Maritime Museum in February this year.

Stephanie gets to represent the UK in the European Championships in Antwerp on Saturday, and then in Paris. Her mischievous intelligence, wit and elegant delivery gets me every time and she is a well-deserved winner.

A big shout out to Anthony Fairweather, Mike Galsworthy, Lucy Gelman, Lori Zakariyya King and others who were fabulous as usual but didn't get through by a whisker as the overall standard was so high and choosing the qualifiers was HARD.

Anna Khan's drag glamazons were the image of the night, Errol McGlashlan was so funny and smart, Wizzard of Skill was the best I've ever seen him, and Jason Pilley was frikkin' awesome.

Thank you John Paul for being our lovely MC. Terrific show, everyone. 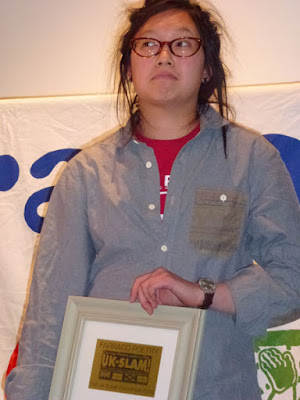 Ey, cheers Anna, and you were great as always! But - sternface - it's "Pilley," as in pills!