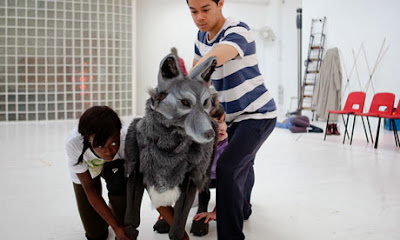 Royal Shakespeare excludes British East Asians from their own culture: maids, dogs and ghosts all right, though.
by Anna Chen — (written 30 November 2012)

When the hallowed Royal Shakespeare Company cast east Asian actors in a miserly three roles out of 17 in the Chinese classic, The Orphan of Zhao, (AKA,"the Chinese Hamlet") , they sparked an uprising of British east Asians that was to gather support from as far afield as the Americas and Australia. Their production was a British courtship of Chinese moolah that included research trips to China and ads in Mandarin, and yet we were virtually excluded from both cultures.

Given the roles of maid, ghost, and working the dog puppet, the three young actors of east Asian heritage were left with their noses pressed against the glass while all but one of the leading roles were hogged by white actors. So much for "colour-blind casting" whose original purpose was to open up the acting profession to us ethnic minorities.

The excuse for this slap in the chops was that the other two plays in the trilogy — reworkings of Brecht's Life of Galileo and Pushkin's Boris Godunov — had "no Chinese connection". You could be forgiven for thinking that a play set in a nation spanning the landmass of Europe and Asia might have included characters with features closer to our lovely high cheekbones rather than the neanderthalesque eye ridge so beloved of western beauty standards. Or questioned if Brecht was in fact so much of a realist. Or even wondered why a white gal could play a Chinese princess but a Chinese could not play a heretical scientist, as if white was somehow the universal default for humanity.

Perhaps it was the claim that RSC artistic director Gregory Doran had interviewed "lots and lots" of east Asian actors when our investigations uncovered eight auditioned out of a possible hundred plus candidates, that set us off. Or the charge of "sour grapes", because one vociferous complainant had been one of the auditionees.

Invisible and neglected, we'd been sagging under the weight of our own ineffectuality under the remorseless onslaught of the yellowface monster swallowing yet another generation of Chinese, east Asians, Pacific rimmers — call us what you will.

Suddenly, here we were, the barbarian horde, camped outside their gate and wanting to play nice but also quite looking forward to the odd head on a stick if they didn't. The RSC have now acknowledged under-representation of east Asians in theatre and have promised to address it, but they've yet to recognise their casting was a shambles. And until I see results, I ain't budging.

"Successful Orphan taps into Shakespearean vein in Chinese classic." Highly selective puff review in the SCMP thankfully corrected in the comments. So much for all the lip service.

Anna Chen's article on the RSC The Orphan of Zhao casting at the Guardian.

Anna Chen's review of The Orphan of Zhao in the Morning Star.