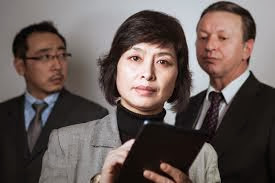 Review published in the Morning Star.

A tale of lost love, miscommunication, betrayal and money, Consumed is theatre for grown-ups. It stands light years above the usual rinky-dink ghettoised east Asian offerings seen in British theatre, with layer upon layer of meaning suffusing this devised multi-media play.

Director Michael Walling, whose conception this is, brings a delicate Tarkovskyesque pace to the stage; its slow full emptiness is a refreshing palate-cleanser for audiences bored with productions that skitter along the surface.

Set in modern-day Shanghai where fortunes are to be made through ruthless enterprise, British businessman John Bartholemew (Serge Soric) strikes up a fancy for Su Chen (Song Ruhui) and pursues his "shanghai dot beauty" on Skype with the connivance of business acquaintance Tong Zheng (Ning Li) acting as interpreter.

Su and Tong are of the generation that lived through the Cultural Revolution, and the emergence of their shared history as students in the immediate post-Mao era explores how far they have come and what has been lost.

Special mentions must also go to Dori Deng for the multi-media design which was well-judged, helping the story along without dominating, and to Nick Moran for his simple stark black and white set.

I wasn't keen on Border Crossings' Re-Orientations, which I thought depended too much on a clichéd feminisation of China. However, it led to this new play which shows that, like the Chinese characters, they have come a long way.

Comparing the recent The Orphan of Zhao with this, it's clear how infantile, limited and outdated the RSC's output is. Border Crossings has cannily placed itself on the progressive side of history and represents one powerful way forward for east Asian themes and actors.