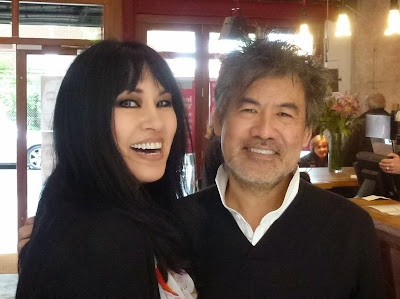 ONLY six months before I finally meet David Henry Hwang, the Western world's most famous playwright of east Asian heritage, the British East Asian Artists (BEAA) led an international protest when the Royal Shakespeare Company gave a miserly three — minor — roles out of 17 to east Asian actors in their first Chinese play, The Orphan of Zhao.

And there are several more on the way with Chinglish and Golden Child expected this year.

Everyone's walking around the theatre with huge grins 'cause our Dave's in town. He's the nicest bloke you could wish to meet with the gentle manner of someone totally at ease with himself.

Hwang isn't just the first ethnically Asian playwright to succeed in the West. He’s got 20 plays, 10 musicals, plus film credits and writing galore on his CV and is recognised as one of the leading US playwrights and as a Grand Master of the theatre there.

Los Angeles-born in 1957, Hwang is the son of a penniless immigrant who became a millionaire banker. But the hip, young and educated Hwang is also a child of the civil rights, Vietnam and hippy eras and his writing reflects much of that progressive mindset.

His works have explored Chinese people’s experience from their first arrival in the modern US. After the first wave of immigration following the discovery of gold in California in 1848, the Chinese worked the mines, grew the food and built the railroads but were treated savagely by the dominant white population.

Suffering racist lynchings and mob attacks, their ill-treatment ran native Americans and African Americans a close third, To cap it all, the Exclusion Act of 1882 — only repealed in 1943 — specifically targeted the Chinese, banned miscegenation, denied them citizenship and turned them into aliens even unto the umpteenth generation.

Chinese Americans have played an important part in US radical politics since the civil rights movement of the 1950s. Perhaps the reason they are so far ahead of the British Chinese in fighting racism and exclusion is down to numbers, Hwang explains.

“When I was a kid, the majority of Asian Americans had actually been born in the US. We were inspired by the Black Power movement which expanded into a general third world power movement that Asians were part of,” he says.

"Since 1965, US immigration law has not favoured working-class labourers from Asia but people with tactical skills. So you have a generation of Asian immigrants who are upper class and educated with certain notions of entitlement that they apply to the US political system."

With that background, it might be expected that they are more likely to vote Republican than Democrat but that wasn’t the case in the last election, where 84 per cent of Asian Americans voted for Obama, Hwang says, the largest of any group except for African Americans.

"There's been a tendency for the Asian American community to split because a lot of Chinese Americans were anti-communist, but nobody really cares any more and so Democrats are perceived as being more fair to minorities. And Republicans are seen nowadays as being anti-science."

Asian American actors were lightning-fast in supporting the British east Asian struggle to take on the theatre establishment over the omission of our third largest ethnic minority from the stage.

Within days, while we were stunned rabbits in the headlights, both Hwang and the Asian American Performers Action Coalition (AAPAC) issued statements critical of the RSC's "laziness and lack of artistic integrity" and the "contradictory and fallacious nature" of their argument.

"We're pretty good on race sometimes but terrible on class. The US has obviously fallen short of its ideals but the ideal of equal opportunities is still there.

“So when Asians advocate equal opportunity in the States it's consistent with the Asian impulse to assimilate in a way that maybe is not as much as in Britain."

Hwang’s play Yellow Face garnered rave four-star reviews. A lone critic said it was irrelevant to a British audience but, as Hwang says, the play is about “some of the pitfalls in trying to create a multi-cultural society. It seems to me that would be relevant here."

As long as history doesn't veer into Pacific conflict and the Chinese don't suffer the same fate as Japanese Americans in 1942, which Hwang acknowledges is a slim possibility, we may have advanced the cause of anti-racism.

Each victory should be celebrated but "equal opportunity" is merely the first step to true equality and to that end we are going to have to look at what Hwang has to say about class.