Demobilising the STWC on the most crucial day of the anti-war movement: Parliamentary vote on Iraq War 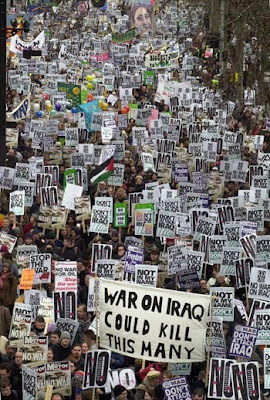 I'd left the SWP and had been "asked to leave" the anti-war movement by the time of the Parliamentary vote on the Iraq war on 18th March 2003, so I missed this crucial decision. An interesting revelation from ElaneH about the lead up to the vote for war in Parliament, and an example of how all that energy from the big February demo was frittered away.

... It is interesting that Alex dates John's drfit away from our politics as after breaking with the SWP---it had clearly begun before this in little and then increasingly big ways. I argued this in an IB article and cannot tell you how much bullying there was by our organiser, a key organiser of the majority faction (including alex) to withdraw the article. I wasnt allowed to speak at the 2010 conference which rather than analysing what had happened turned into a rally for the majority faction and focused on the crimes of john and lindsey but not on the politics behind the errors.

I would like to know what Alex has to say about the majority of the CC's position at the time, and now, on the drift away from our politics. which were clear in the failure of stop the war under John and Lindsey's leadership,to follow up the massive march of millions with gathering outside of parliament WHILE the vote on war was being taken. This was a key moment in holding the movement back and a serious breach of our politics--I remember being hammered by everyone for arguing that should happen but in those days (well done Rob et al) we didn't argue in public.

It was that failure which I assume was due to a deal with Clare Short et al, that first made me think that we, the rank and file in the movement and the party, were being treated as a stage army. Then john answered a question at a Respect meeting by saying that the reason for setting up respect was the 100 MPs who had betrayed their promise to vote against the war. He recounted that if all those who had promised to vote against war, did vote against it, the government would have lost. In hindsight i think that the reason why they were allowed to demobilsie the movement on the most crucial day without an open row in the party was that the rest of the CC also didn't spot the danger--had forgotten the most basic rules of leninism (ie Marxism) and trusted not the masses to take the movement forward but the politicans instead. A little self criticism as well as criticism might be in order when Alex looks at breaks with our politics. everything would have looked different with tens of thousands at parliament first demanding an anti war vote and secondly, responding in a powerful way to the vote being for war. it was harder, so much harder, to keep people involved on the ground after the deal was done. leninists should have known that.

From that point onwards, at least in East London, the party members were used as fodder. We didnt have meetings unless it was to get the line on who to vote for in selecting candidates. Two instructive moments for me were 1. early on in the respect process, a leading comrade in respect in the area got really angry with my arguing for meetings and especially for papersales, "dont you get it Elane," he demanded in frustration, "paper sales are not where it is at. the SWP is finished. respect is the way forward" and then a while after i was physically thrown out of the office by an SWP member close to John and Lindsey for bringing papers into it with a threat to burn them if i brought them in again. CC members knew what was going on, but there was no leninist fight to change it, until it was way too late and the very people who had liquidated us, then wanted to differentiate us in a sectarian way. Leninism was reduced to obeying instructions or being punished... and that was not by john rees, but by the CC as a whole who lacked the leninism to take the working class comrades seriously or to engage in criticism or self criticism. apparently they were fighting among themselves bitterly but not in front of the children--how is this Leninist?

Now leading a People's Assembly near you.

Hi, Anna, excellent article but your link to ElainH near the end is, I think, the wrong one. It takes you to an RS21 page on Callinicos on Leninism.

Thanks, Rosa, but it's the correct page – Elane's comment is below the piece.