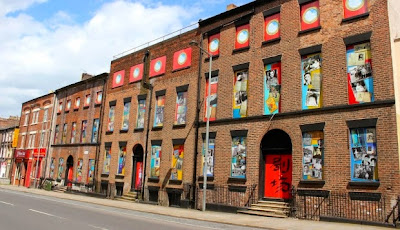 
City scope: Windows to the past
Anna Chen in Liverpool


Liverpool, home to the oldest Chinese community in Europe, is hosting the International Festival for Business (IFB) this summer. And if you thought Britain was a country that didn't "make" anything any more, the IFB's emphasis on hi-tech industries serves as a reminder of what the nation does so well: the manufacturing, advanced engineering, automotive and aerospace sectors are all thriving.

Having been booked to read poetry for the festival's China Day, I discovered the city has had a wash and a brush-up in the decade since I last visited. The first thing you notice on emerging from the swanky new curved roof of Lime Street Station is the acreage of glass and steel springing up alongside the old iconic architecture.

The building of the Tate Liverpool art gallery in 1988 spearheaded a revival of interest in the visual arts, but it's only now that the visitor can see it exploding from the town's every pore.

Opposite the Il Forno restaurant, in Duke Street, where I was due to give my talk on the Chinese diaspora and read poetry, a grim Georgian terrace has been magically transformed into "Opera for Chinatown", an art installation dedicated to early Chinese immigrants. Once a boarding house, it's now a key piece of history for the Chinese in Britain.

A palette of scarlet, black, yellow and ocean blue against red brickwork frames enlarged black and white photographs of bygone inhabitants gazing out from the windows at the modern world. Descendants of these subjects have been moved to tears on seeing a forgotten generation made visible.

Some of those early boarding-house residents were sailors who'd served in the British merchant navy during the second world war, but were secretly and forcibly repatriated to China after risking their lives for the Allied cause. Many left behind families who never learnt of their fate.

In The Curious Disappearance of Mr Foo, a remarkable play about this shameful episode, which premiered at the festival, Simon Wan and Tina Malone play lovers torn apart by the Clement Attlee government's betrayal.

Writers Moira Kenny and John Campbell based the dialogue on verbatim testimony from their Sound Agents oral history project to create a powerful and illuminating drama which, alongside their invaluable preservation of the story of Liverpool's Chinese population, places the city centre stage in the rich chronicle of the diaspora.
Posted by Madam Miaow at 7/21/2014 02:41:00 pm