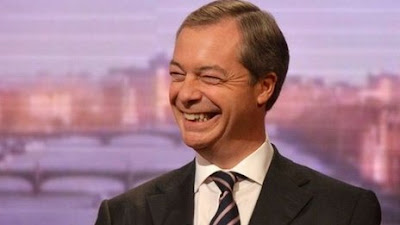 This council estate-raised "chinky bird" is making a heartfelt plea for all the magnificent Chinese restaurateurs and takeaway caterers of the British Isles to piss in Nigel Farage's prawn balls if ever he shows his dinosaur face near their establishments. Of course, they won't because they're too nice: much nicer than the bigots that Ukip appeals to. Nevertheless, I live in hope.

Nigel Farage has defended the antediluvian 'chinky bird' comment made by former Ukip activist Kerry Smith, asking: "If you and your mates are going out for a Chinese, what do you say you’re going for?”

Personally, I'd say we were going out for a Chinese. Or an Indian, Japanese, Thai, Mexican, Italian … whatever.

Racism and sexism all rolled up in one tiny two-word phrase of hate. That's an impressive economy of bile for you.

He then compounds it by writing off working-class people as racists and excusing Kerry Smith, Ukip's former parliamentary candidate for South Basildon and East Thurrock who made the offensive "chinky" and "poofter" comments, because he was a "rough diamond" raised on a council estate.

“He’s a council house boy from the East End of London, left school early, and talks and speaks in a way that a lot of people from that school and background do."

I've heard as much, if not more, racism and general bigotry from the bourgeoisie who inhabit the virtually all-white areas that Farage and his Ukippers court.

On my council estate — the Gascoyne estate in Hackney — only the most ignorant used hate language as callously and casually as Farage's former candidate. It was a long time ago, well before these issues started to be properly addressed. Decent white working-class people already knew that such language hurt people. Others took a while longer to realise what effect they were having on their neighbours. Gascoyne's residents were made up of a healthy mix of backgrounds and I felt safer there than in some of the white-dominated milieux I've subsequently seen.

Nowadays, only the deeply disturbed and terminally/deliberately thick insist on keeping it up. They're trying to bring back the bad old days when non-whites and other minorities were excluded and marginalised from the British society to which we all belonged.

It shouldn't be necessary to reiterate that it's not immigrants who crashed our economy, and currently still treat it like a big roulette game or a flutter on the gee-gees. It's not immigrants who decided to stop building housing for the mass of the population or make it necessary for the state to subsidise the corporations in rent, low-pay, zero-hours and rail fares.

There's a whole wide world out there from which the brighter among us can draw. I know you know this, Nigel, because being an MEP evidently has its perks. So stop exploiting popular prejudice like a Poundshop Enoch Powell (copyright Russell Brand's chest-hair):  for a man who prides himself on thinking outside the stale old box, you don't half talk some scheisse.