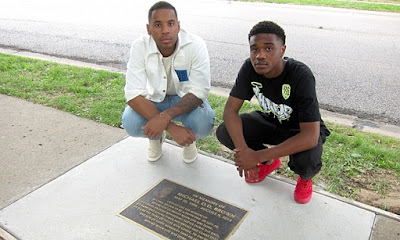 There's a lot of shark-jumping going on down Fleet Street. You may have observed the liberal press laying into the resurgence in progressive politics of late with a hysteria largely missing in action when it comes to the current assault on the poor, about which they are remarkably sanguine. I haven't seen such a screeching mess since the Mogwais were last fed after midnight.

Bankers break the economy and lie about Libor; the top percent double their dosh since the crash while the poor are driven to debt and suicide to better recapitalise the system. However, it's not the brutal transfer of wealth from poor to rich that's driving them to frothing fury, but Jeremy Corbyn's vest. How dare the new Labour leader lack vanity, have principles and, at long last, give hope to the weakest after three and half decades of Thatcherism?

When the oppressed and their champions mount a challenge, the liberal press turn out to be not quite so liberal after all. Just as the French government put their war with Prussia on hold in 1871 to team up with their 'enemy' to massacre the Paris Communards, you can barely squeeze a cigarette paper between the Guardian and their New Statesman stablemates on one side, and the Daily Mail et al on the other when it comes to maintaining the status quo (emphasis on status. And privilege.)

It's crept into every nook and cranny of the culture like the noxious diesel fumes invisibly killing us while someone makes a profit.

And lo, black Londoner Reggie Yates makes a thoughtful piece about the killings of black men by police in America — Race Riots USA — and what is the Guardian's chief concern? "Yates can’t seem to decide if he’s supposed to go with the poker face or let rip with his own opinions." Or as the headline has it, "an impartial observer's indignance leaks through." (Did they mean 'indignation', by any chance?) Uppity Reggie! Heaven forfend that a journalist is able to tell this story from the inside out like a human being, not a robot. What does he think this is? Jezza's vestgate? He's reasonable, puzzled, enquiring and moved rather than the easy-to-dismiss raging black man some of the media might prefer.

In case that didn't convince you to move along, nuthin' to see, the Guardian chips away with the flimsiest justification: ' ... “It could have been me” pronouncement while a driver holding a “Reggie Yates” sign meets him at the airport and takes his bags to the car. It confuses his status: is he the inquisitive everyman, there to guide us through the subject, or a celebrity who doesn’t carry his own bags?'

Perhaps it shows him as an ordinary dude who has booked a cab to meet him at the airport and, as is common practice, the driver's waiting with a hand scrawled sign of his passenger's name. It begins the story with his arrival and makes the point that he is from the outside ... and yet not.

Unarmed men and women are being murdered by white police and will never receive justice because of the colour of their skin, a skin they share with Yates. Some 176 in one year alone. Neither are women and children safe: a pregnant woman thrown to the ground; a bikini-clad adolescent manhandled by a cop at a pool-party; the boy with a toy gun shot dead; the teenager killed in the back of a police van. And still they keep on coming.

It is a scary, distressing and enraging catalogue of horrors. But the author of the Guardian review is most concerned about Yates getting above himself at the airport. Such was her snide hostility that I thought this couldn't possibly be a white writer as any halfway competent editor would have spiked such naked spite by a representative of drearily dominant whiteness, and that this must have been written by one of the house slaves. But no, Julia Raeside is white. And protecting her patch.

It is a bullshit piece. Obtuse, deliberately not understanding the issue. How could a journalist write something so hostile, so blatantly ignoring what Yates has done here? He's taken us into the belly of the beast and introduced us to its ugly complexities so effectively that, despite herself, Raeside almost praises him, but then catches herself and has another snipe in parentheses:


'When the rally is approached by two young black men, one in a Peace & Unity T-shirt, both of them filming with their phones, the unease is palpable. But a quick intervention by Yates (he gets away with a lot here by having a camera crew in tow) begins a dialogue between a blonde woman and the T-shirt pacifist, in which they largely agree on the need for cooperation.'

Yates also performs a fine journalistic function (unlike Raeside) in revealing that filthy lucre, not just blind prejudice, plays a key role in the collective tragedy that is Black America. The police force, which is around 94 per cent white, pays for itself with the fines on the Ferguson community, which is 70per cent black. Some of the people dragged into court owe five thousand dollars in what is an institutional shakedown with menaces. And on the day that Yates visits the court, they are all black. See what happens when you have a service based on profit? Which brings us neatly full circle to Jeremy Corbyn and yet more reason Labour must make the crucial challenge to austerity, exclusion and privatisation.

How often do you see a black person in Yates's position with a VOICE, who isn't a white person's stereotypical creation? The Guardian piece, people of colour, is the slap down you get for doing white folks' job and doing it well. Can't have young black people inspired like this. They might start demanding equal rights and opportunity. By the way, I'm delighted to note that Reggie and I went to the same school: Central Foundation Boys (in Old Street) and Girls (Spitalfields).

One question I would like answered is whether this wave of killings of unarmed black men and women has risen since Obama became President. His ascent to power seems to have driven Republican whites mad and you wonder if, unable to reach the interloper in the Oval office, the grim truth is that any black person will do.

EDIT: even sweeter, this was filmed, directed and produced by Ruhi Hamid and produced by Kandise Abiola, two women of colour aiming to "reflect the mood of Ferguson ten months after the riots and protests that followed the fateful shooting of Michael Brown by officer Darren Wilson." 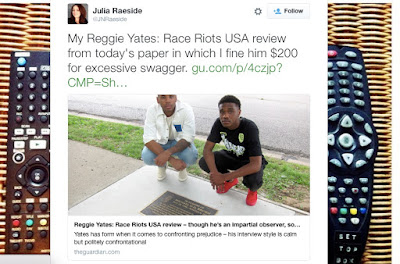 Postscript: Julia Raeside thought it was a good idea to advertise her nasty clickbait piece with this tweet. I looked from Guardian to Daily Mail and back again and already it was impossible to tell which would look better in a cat tray.
Posted by Madam Miaow at 10/01/2015 02:43:00 pm

I just watched the documentary myself, read the same review and could barely believe my eyes! I was incredulous as to how someone could have missed the point SO. BADLY. Then I correctly surmised "of course the author must be white". Honestly, I couldn't think of a whiter response than the one she vomited over her computer screen.

To watch such a nuanced and moving show about violence, murder, racism, police brutality, prejudice, discrimination and gun laws, and the only response you can muster are irrelevant, unfunny and unwarranted jabs at the presenter displays 1. intellectual deficiency as you were unable to critically analyse and dissect the subject matter at hand 2. indifference and apathy at a whole group's suffering on sociopathic proportions.

She is literally like the white protesters and white women in the "I heart Ferguson" store who had probably never EVER considered a view point or reality other than their own, which is completely filtered through the lens of their white privilege. I thought it was a disgusting article and am complete agreement over your take down of such a vile woman!