Michael Gove wanted me to "powder him down": Remain experts compared to Nazis 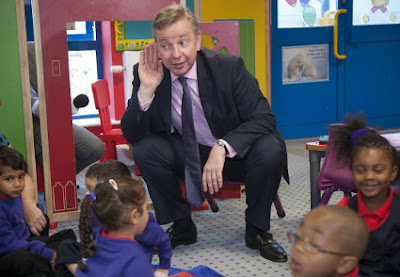 
Michael Gove appears to have been struck silly by the Hitler Tourettes syndrome afflicting the political class when under pressure. Brexit's Number Two says that the many pro-Remain economists who urge Britain to stay in the EU are like the German experts who told Albert Einstein he was wrong. Our former minister for education says experts, schmexperts. Facts? Schmacts. You can prove anything with facts. Phooey to Enlightenment values such as Truth.


Oh, sorry, that was a quote from Alice Through the Looking Glass, an easy mistake to make. Here's what Gove told LBC's Ian Dale:


"We have to be careful about historical comparisons, but Albert Einstein during the 1930s was denounced by the German authorities for being wrong and his theories were denounced, and one of the reasons of course he was denounced was because he was Jewish. They got 100 German scientists in the pay of the government to say that he was wrong and Einstein said: 'Look, if I was wrong, one would have been enough.'"


Hmm, comparing himself with a genius under persecution from the Nazis. A scientist. Who used facts. Which made him a bit of an expert. And Michael really doesn't like experts.

He unexpertly claimed footballer John Barnes for the Leave camp. Barnes has other ideas.


... So my reasons for supporting remain are probably different from those of many others: immigration. And I don’t believe this is an issue that the leave campaign should be based on.

Leave is preying on people’s fears, telling the same story we’ve heard over the years about black people from Africa and the Caribbean coming to steal our jobs. Now we hear the same thing about Poles. If leave wanted to say that companies are paying migrants less than British workers, and so allowing them to take our jobs, then it should be looking at raising the minimum wage – not stopping migrants entering the country. The problem has nothing to do with the Polish workers – it is an issue about our labour laws. Yet leave maintains its focus on immigration.

Mass migration and the refugee crisis is one of the biggest problems facing the world. In this country we assume that everyone just wants to come to the UK – but it’s an issue in Germany, Greece, Sweden, all across the EU. Why should we be the first to turn our backs on the problem? We have to think not only about what would happen to those unfortunate people, but to the rest of the planet too. What kind of example would we be setting? We should be the first to help disadvantaged people. What would happen if other countries decided to follow our example?

Britain has always told the world that being British is about the humanity, compassion and moral fortitude that we have. All great things that we are supposed to have spread across the world. A leave vote now says that we don’t really care about anyone else, we don’t care what happens to the European Union. Why should the Germans be able to show more compassion than we do? ...

You never hear Brexiteers challenging employers who pay such abominably low wages that only impoverished immigrants will do the job. Or the supermarkets who gouge their farmers for prices touching or, in the case of milk, below production prices in order to maintain huge profits. Yes, I would pay the proper cost if it meant the sort of economic reality that allowed wages that matched the cost of living in Britain.

But, no. The rich people with the most invested in Brexit would keep paying low wages; only it would be Brits pulling turnips for sixpence a shift, not Lithuanians.

All those claims that "we" would take back control of our borders — we already have control of our borders. A quick glance at any airport will tell you that. F'rinstance, Chinese tourists need only one visa for the whole of Europe except for Britain for which they require another visa in order to drop thousands at Bond Street and Harrods. Some of them don't bother and would rather spend it in Paris or Rome or wherever their money is actually wanted.

And the blind faith that "we" will take back control of our country ... Who is "WE"? I think you'll find we are subjects of a feudal monarchy with nobs on and not citizens with full democratic rights of a constitution to which we are all signed up.

As a mark of how much power "we" will gain, remember that former London mayor Boris Johnson spent £200,000 of public money on two water cannon from Germany — powerful enough to cause serious injury such as broken spines and pulverised eyeballs — to use against us Brits when we protest against the relentless predations of the super-rich and their government that gained power with only 26 per cent of the electorate's votes. 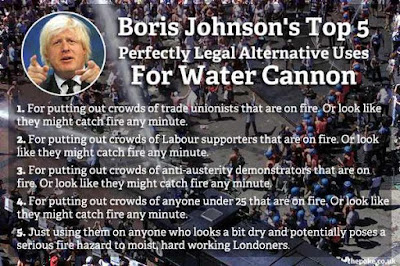 Time to dust off my encounter of the turd kind with Michael Gove in the noughties ...

"It was when I was publicising The Best Democracy Money Can Buy", said buxom press-officer Anna Chen, 22, flicking her long tresses out of her almond eyes. Sultry beauty Chen said, "There I was in the Green Room, helping my mate Greg Palast not reflect the light from his very high forehead when Michael Gove, who was there for an 'interview' with our Kirsty, suddenly reached in and grabbed. He'd been coveting the contents of my little make-up bag with his pre-lasered eyeballs for ages. This was back in the day before he got his new hairdo and makeover."

Sinister Gove then asked her to "powder me down".

"Powder me down" is a well-known perverts' term for unspeakable televisual and filmic practices.

"So there I was, trying to beautify the most evil Education Minister this country would ever see like some champion fluffer. All my skills and photoshopping couldn't prettify this ugly little monster."

Ms Chen is deeply regretful. "It's like when they ask you, if you could go back in time and top Hitler before he came to power, what would you do? I wish I'd tattooed the pursed-lipped creep with 'I am a threat to your children' across his fugly mug. To have missed a chance like that is enough to turn you to drink," said the busty Ms Chen, pouring herself another quart of Absinthe with a trembling hand.