President Trump to personally handle UK trade deal despite his nightmare record in business: Theresa May rolls over 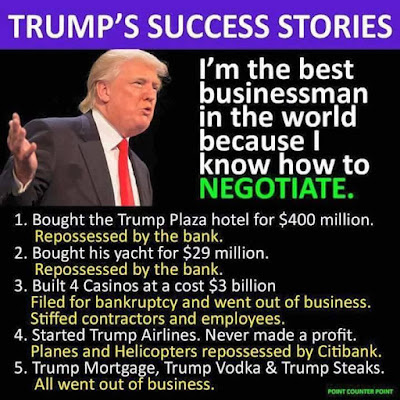 President Trump has told Theresa May that he will personally negotiate the trade deal with the UK. He has no commerce secretary yet.

Many of us are wondering what could possibly go wrong?

Estimates that the Trump chicken comes home to roost (in the Chinese year of the Fire Rooster, note) are set somewhere around the autumn. Trump can't possibly achieve the 3-4 per cent growth he's promised due to the unvavourable demographics. Baby boomers are retiring and not being replaced. US unemployment is low so wages will rise (a good thing), leading to inflation (bad if this is due to rising costs, not greater demand or consumption).

My understanding is that the underlying pattern is deflation after the stagflation period (inflation with stagnant growth). So the Fed will have to tighten monetary control by raising interest rates to control rising inflation after years of trying to kick start it, and the US will be at, or heading back to, negative rates by next year.

However, rather than lower rates stimulating growth and investment (it didn't work before, it created bubbles), expect an exodus of money from overpriced US stock markets which may trigger the inevitable crash everyone's been waiting for as they play pass the parcel with a live grenade.

Trump can only disappoint.

Wealth fleeing the stock markets will chase bonds for a fixed income — even if Treasury bond yields hit 2.5-3%, this will be higher than plummeting or negative interest rates by then. Then the yields drop as everyone dives back in and when these fail, it's down to cash and digital currencies.

Depending on who you listen to, gold will either soar to 10,000 bucks an ounce or it will drop to $700 as it's not a currency and you can't buy a loaf of bread with a flake of gold if things actually get that bad. There's a saying: "Buy gold for protection but hope it doesn't go up." 'Cause then you know something seriously ba-a-a-ad is happpening and the price of gold is probably the least of your problems by then.

In the meantime emerging markets (EM) such as Brazil, India and Asia in general — the one area of meaningful growth — will have been damaged by Trump's protectionist policies. The dollar will keep heading north as there will be fewer of them and global trade is carried out in dollars. This will make US manufacturing hellishly expensive for overseas buyers. So I think there will be disaster within Trump's first two or three years. He may even have the inevitable crash later this year.

And who will get the blame?

Round up the usual suspects: immigrants and China.

If things look particularly dire, central banks may return to the bankrupt policy of Quantitive Easing whereby the government floods the economy by buying its own debt bonds and keeps everything artificially buoyed up, creating asset bubbles. Capitalism allows the market's survival of the fittest rules to decide everything except when it comes to a crisis that hits the wealthy. Then the markets must be rigged — which is what QE and bailing out failing banks amounts to. Socialism for the rich, capitalism for everyone else. 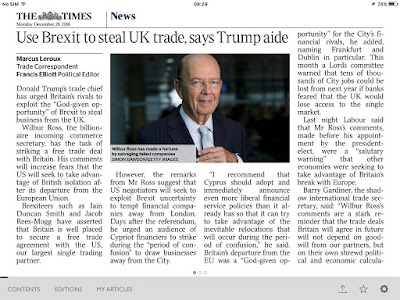 I don't see how we can't be pulled into the US maelstrom especially if our post EU trade depends on the US. Britain has landed between Scylla and Charybdis, the whirlpool of an imploding EU and the crashing rocks of the Trump toddler on the protectionist smash-up. The best we can do is win a role as a vassal state of the US. Well done Cameron for triggering a global domino collapse with that unnecessary referendum which MPs voted for because they were assured IT WASN'T LEGALLY BINDING ... Asia might pull something positive out of a hat, especially if China fills the gap left by a protectionist USA. But then the stubby-fingered one will most likely try to bomb them back to the stone age. You can see the boys gagging to play with the toys with a blockade of the South China Sea's Malacca Straits as the opener.

Maybe this is the one area where he gets to please his mates after all. 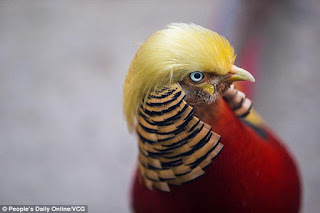