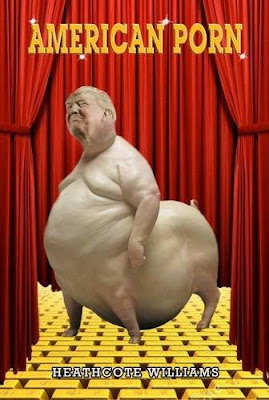 Seems like we are all stuck in a science-fiction writer's coma dream, so deeply weird have been events of the past year. The culmination was the installation by electoral college (as opposed to popular vote) of our Orange Overlord, Toddler Trump. Or is it Eric Cartman and his Asian Cartman counterpart, Kim Wrong-un?

How would Western culture respond?

Heathcote is lighter on laughs but more intense on historical background, which anyone familiar with his stunning Royal Babylon will know. There's real substance in his writing, balancing passion and disgust on a razor's edge lest he stare into the abyss for too long. Like all great poets, he connects seemingly disparate events, building a fully three-dimensional picture of how we got here. This requires delving deeply into the alt-fact mire and fishing out shape and sense without puking — a heroic endeavour.

His poem Happy Thanksgiving (as opposed to a Happy Ending) disdains the usual amnesiac festive platitudes for the horror of those first meetings between indigenous Native Americans and European immigrants. If only the natives had had the means to build a wall. "But this nation was created by Zombie cannibals". Williams then gives us gruesome vignettes of barbarism and treachery, not on the part of the natives, but of the pious, bible-bashing interlopers and their God-bovvering hypocrisy. "The Pilgrim Fathers belong not to history, But to a quasi-religious ideal," which is still running things, especially with the ascension of Trump.