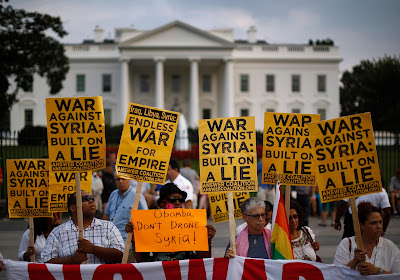 Lemme see ... in the week when Steve Bannon is finally ousted from the National Security Council (NSC) with nary a murmer from Trump who suddenly does a dramatic reverse on Syria in the very moments when Chinese President Xi Jinping is at Mar-a-Lago ... Phew! All the behind-the-scenes action finally manifesting in the public sphere with the first direct U.S. airstrike on a Syrian airbase.

Let's unpack this with what little info we have. Assad is winning the civil war but, just at the moment the rebels and their backers want the US smashing them into regime change, he handily provides the event most likely to bring it on and uses the banned chemical weapon sarin on his citizens leaving some 80 dead and many more horribly injured. And only weeks after 30 Yemeni civilians including "beautiful babies" and an American Navy Seal were killed in allied airstrikes in concert with those noble defenders of democracy, Saudi Arabia, and closely following over a hundred killed in Mosul.

Out of 59 U.S. Tomahawk Cruise missiles aimed at the Syrian airforce in a "precision strike", 24 hit their target resulting in around seven deaths but with many more lined up if events escalate. 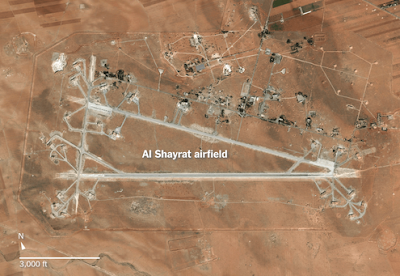 No evidence has been presented so far to justify this unholy rush to military conflict. Check out Trump's efforts to keep Syrian refugees out of the US (and ours to keep them out of the UK). What of the depleted uranium and cluster bombs used by the US and Brits which continue to do their damage in Iraq? Will the US allow the Syrian rebels to continue using chemical warfare? Guess who sold Syria the chemical components for sarin only last year? BRITAIN! Commiting, facilitating and using atrocities to further your political agenda is WRONG no matter who is doing it.

We are run by monsters who care nothing about the general population — not you, not me, not "beautiful babies" — only the retention of power.

Still, it's an ill wind that blows nobody any good. Reuters report that shares of Raytheon, the makers of the Tomahawk Cruise missile, soared 2.1 per cent immediately after the attack while you'll be relieved to know that US stock futures recovered from a drop after the airstrike on Syria. 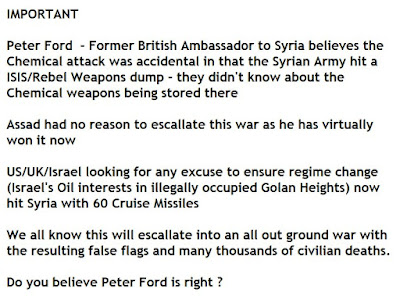 What was Trump's reverse-ferret REALLY about? Why is Tillerson now pivoting towards dislodging Assad when all Trump's election rhetoric expressly rejected that particular neo-liberal policy? Is this a diversion from his myriad domestic problems? Had Trump just seen the figures showing U.S. job growth screeching to a halt, and the unemployment rate up at 4.5 per cent signalling the end of the Trump reflation rally? Or has Deep State been digging into the murky oubliettes of Trump and his team, applied the thumbscrews and now produced something solid on him? 'Ey, wanna be impeached? Your businesses trashed? Or would you like us to present you as the best. Pres. Evah? Gotta sell your mate Putin down the river. Gotta let Bannon sink. But you are our President now.

What did they tell Xi at Mar-a-Lago? (Apart from, here's a nice bit of fugu fish that President Abe left for you the other week.) Don't interfere in our plans for Syria if you don't want an unpleasant trade war or worse? It must have been like the Godfather at the southern White House with Don Corleone letting everyone know who's boss, but we don't yet know if the actual Don is the Donald or Deep State, the US political and economic establishment. ('Dis is wha' happen when a guy don't do what a guy is told, capeesh?')

There are parallels with Iraq and look how well that turned out. Let's hope they don't turn Syria into radioactive rubble as well. Meanwhile, we continue to suck up to Saudi, Duterte, the Stans ...