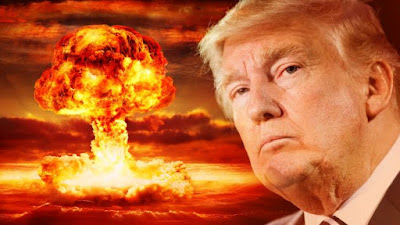 It's fascinating (in a horror-show kind of way) to watch the United States of America write itself a new narrative. Not the one where it dominated the post-World War II liberal global order and made itself the wealthiest economy on the planet by a long chalk, but a victim narrative in which poor little America is bullied and ripped off by China, formerly one of the poorest countries in the world but which now happens to be looming in America's rear-view mirror.

For several years, we've been told by the experts that China is the exciting new economy in which the world's investors were parking their money, while the US was in decline with failing demographics and dim long-term prospects. With China's population of 1.4 billion, a growing middle class of over 500 million, 800 million raised out of poverty, an internet penetration rate of only 55 percent (against US 83 percent), and American companies making money hand over fist with a lot more to come, you can see how some might cast an enviable eye over such a fat, juicy market and think: I'll have that.

According to the China hawks' tortuous retrospective logic, goods bought cheap by middle- and low-income earners, allowing them to live beyond their means and consume to their hearts' content, was some sort of conspiracy draining the nation's precious essences. Trump sees the phoney deficit of $300-500bn as money owed to them, in the same way that a Mafia Don might eye some successful business and persuade himself (by an assortment of mental, moral and factual gymnastics) that this treasure somehow belongs to him. It always did. We were always at war with Eastasia. I hope all those poor cheated consumers descend on Walmart (whose fortune was founded on buying cheap Chinese goods made in often dreadful conditions) with decades of receipts in hand to demand their money back.

The unpalatable fact for Trump is that – taking into account in-country Chinese sales of US goods and services such as those of Starbucks, Apple, MacDonalds, Coke etc – the US has a $24bn SURPLUS with China. And as even Gary Cohn pointed out, the "deficit" represents $300bn of goods that Americans could buy cheaply and thereby feel richer than they actually were.

And how about all that US debt bought up by China after the 2008 crash which allowed US citizens to avoid the full brunt of the crisis and continue to buy stuff despite the US being broke? Having been punched in the face for their help, I doubt they'll do the same next time America's in trouble. Furthermore, some pundits are considering the possibility that Trump simply defaults on US debt. Don't forget that "Trump ran for office on his background as a captain of industry, touting his companies’ four bankruptcies as shrewd business maneuvers."

So far we've been fed ad infinitum the myth of forced technology transfer, accusations of spying, and claims that China is manipulating its currency downwards when it has actually been spending vast amounts of its reserves to prop up the yuan. And now we have everything but the kitchen sink thrown at China in order to whip up war fever and justify the unthinkable: war with a nuclear power. Casting itself as lily-white ingenue on the world stage, taken advantage of by Sinister Forners, this indulgence of paranoid wingnut Peter Navarro means conveniently forgetting American spychips – including one on Angela Merkel's phone – and all the spying that the west is so good at. We've all forgotten western pride in its espionage capabilities, from fictional James Bond to the actual School of the Americas. It's like Edward Snowden's revelations about the NSA's global surveillance have been wiped from the media's collective memory.

This is not, incidentally, to give China a free pass for its own abuses. Advances in gay and women's rights have been clawed back; trade union rights are a site of struggle; emulating America's cruel mistakes — from locking up its Japanese citizens following the Pearl Harbor attack to incarceration without end at Guantanamo — by shoving Uighurs into "re-education" camps is surely storing up trouble. But ... worse than Saudi Arabia? Deserving of being bombed back into the stone age? It wasn't China that nearly started World War III with a war on Iraq that killed 450,000 people or created the current humanitarian crisis in Yemen. All most Chinese want to do is drink Starbucks coffee and wear Nike trainers as part of a life that's lived decently. The new Chinese society saves pandas and tigers, campaigns against animal cruelty, condemns the racism of rogue Chinese business in Africa, and debates where they are headed as a nation. We are more alike than not.

The wealthiest nation on earth knows its decline has a variety of causes: under-investment; spending and not saving; the 1 percent and 0.1 percent creaming off the profits until, according to Wikipedia, "Currently, the richest 1% hold about 38% of all privately held wealth in the United States while the bottom 90% held 73.2% of all debt. According to The New York Times, the richest 1 percent in the United States now own more wealth than the bottom 90 percent." The political scapegoating of China for America's woes looks more and more like a diversion from who ate all the pies.

All of which brings me to my big prediction for 2019. I truly and sincerely hope events will prove me wrong. All signposts point towards a global calamity, but that doesn't mean that human ingenuity can't avoid it.

Now that General Mattis ("the last adult in the room") is leaving, Trump can remove the remaining troops from Syria and Afghanistan — notionally a good thing if you are anti-war (which I am). However, an abrupt and unplanned withdrawal without peace negotiations means, for instance, abandoning the Kurds, who fought valiantly to defeat Isis, to be slaughtered. But I don't believe that Trump's withdrawal is entirely without purpose.

Similar to Obama's pivot to China — when Barack took his military out of the Middle East and moved them to Asia, stockpiling missiles around the South China Sea aimed at the Middle Kingdom, and then acted surprised when they built defences — I think there's a chance that Trump will pile his forces into the South China Sea, engineer a conflict and get to use his big red button. Either that or some slip-up with North Korea putting Seoul at immediate risk. Or Iran. You just know he's itching to do it: "What's the point of having nuclear weapons if you're afraid to use them?"

His friends will all take to their nuclear bunkers in New Zealand, assuming that simply existing as a mobile meat sack in a post-nuclear apocalyptic world, even in material luxury perhaps, is preferable to preserving peace for the whole of the human race on this extraordinary planet. That's if their security squads haven't mutinied, slaughtered their masters and taken over the asylum.

Ho, ho, ho. A merry Christmas and a happy new year to all. Let's hope it's not our last.