China's new Covid measures for 2023 and the West's response

Happy new year to one and all.

A welcome mild spell of weather in the UK takes some of the pressure off us from spiking energy prices under the new world order's decoupling from China, our global lifeboat and factory. Every country that refuses to come to heel in the Rules-based order that has quietly replaced the Rule of International Law is now target for the declining US, riven as it is by a looming recession deflating the Mother of all Market Bubbles, an incipient civil war between two equally unpleasant opposing factions of north America's ruling class, and Covid rendered endemic in pursuit of the rising rival.

The USA's promiscuous use of sanctions on anyone who even looks at them funny has accelerated the drive to find a multipolar solution to the declining hegemon's incessant wars and exploitation. Africa shudders as it realises it's next on the menu. Latin America has been around this block many times. The BRICS nations (Brazil, Russia, India, China and South Africa with more than a dozen others queuing up to join) realise they're in a race against time as the West dons its 19th century Empire drag in the absence of anything positive left to offer.

In December, under some of the most aggressive propaganda attacks ever fielded by the West, China finally decided to make a break for safety, taking advantage of the milder Omicron variant. The media's screeching about "inhumane" lockdowns under the Zero Covid policy immediately turned on a dime to howls of rage that China dropped Zero Covid. Such doublethink barely masks the absurdity of complaining that China may end up giving us back the variants we'd been stewing up and sending there over the past three years.

As China downgrades Covid to a Class B infectious disease, the Guardian (among others) kicks off the year with yet more hysterical demonisation of China — "China is now the centre of Covid: the world should be watching and testing"  — by a professor, no less, who's missed the part where the US and UK stopped testing for and counting their own Covid ages ago. I wote the following comment.

Who does the Guardian deflect onto as "unreliable" and not transparent?

From the start, China's Covid eradication roadmap, achieving Zero Covid by day 43 of their 76-day lockdown Jan-Apr 2020, was aggressively sidelined by the mainstream media. The Guardian even front-ran the Republican Senate's 57 page memo (April 2020) instructing politicians and media to "blame China", the effects of which have been felt ever since at the expense of public health.

The people of China held out for three years while Trump delayed, called the pandemic a hoax, stigmatised masks, held superspreader rallies, undermined the science and allowed Covid to seed in the population. Johnson mirrored Trump, matching more than a million US deaths with 200,000 of our own.

Thankfully, there weren't the same ruthless geopolitical objectives when we worked together to eliminate smallpox, polio and other killers or we'd have been truly stuffed decades ago. We aren't testing or counting — who is it who's not transparent?

China's now having to run through the fire as our variants overwhelm their efforts to much gleeful spite from the West. In true Orwellian fashion, war is peace, freedom is slavery and we now claim our huge, unnecessary death toll, the battle with Long Covid and damage to the NHS for privatisation as a success.

It's not just Covid that alarms. It's the gradual but relentless nailing into place of a narrative that serves our feral, under-taxed elite now straining for a war on our global lifeboat.

Kneejerk responses regurgitate the suppression of whistleblowers who, its turns out, were not whistleblowers after all, as I and others have repeatedly pointed out:

The media preferred to turn the late opthalmologist Dr Li into a martyr as proof of a cover-up despite his WeChat message wrongly identifying SARS going "viral" in an email and threatening panicked flight of a possibly infected public after Dr Zhang had already reported her grim discovery. Dr Li's message was to a small WeChat group, a member of which shared it against his specific request. The World Health Organisation, US CDC and press including Reuters knew of the novel coronavirus by 31st December. Dr Li wasn't arrested as claimed, but was heavy-handedly reprimanded by police on 3rd January — after work had begun on the virus and news was out — and told to sign a document pledging he wouldn't do it again. Tragically, he would become an early victim of the virus, catching it from a patient and dying on 7th February.

Americans would find suppression of critical medical information nearer home in Seattle where Dr Helen Chu found early Covid-19 cases from as far back as January 2020 — "It's just everywhere already"— but was told to shut up and stop testing. Or watch the CDC's director Robert Redfield finally testifying to Congressman Harley Rouda in March that they had been wrongly diagnosing Covid-19 deaths as flu.

Covid's presence in the US and Europe predate Wuhan (see US Red Cross blood samples taken December 2019-January 2020 indicating first infections from at least August 2019). The CDC admits misdiagnosing early Covid deaths as flu. The US briefed NATO and Israel but NOT China in November 2019 about the coming pandemic in Wuhan. Chinese inactivated vaccines are as effective as western active mRNA after three doses and with lower side effects. 90% of China's population is fully vaccinated, with the elderly lagging at 86%.

We now await the onslaught of Kraken, the virulent XBB.1.5 variant that's been cooking up in the US but, hey, let's blame China. 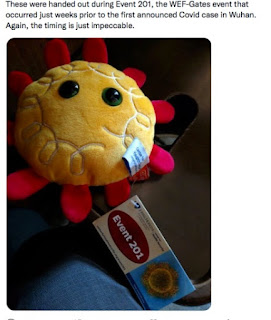