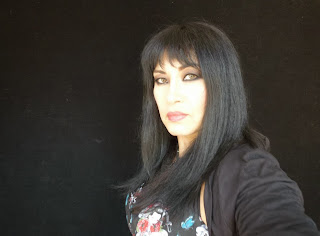 Anna Chen is a writer, performer, poet and broadcaster, born and raised in Hackney, east London, to a Chinese father and an English mother. She has written and presented programmes for BBC Radio 4 as a freelance and presents her arts series, Madam Miaow's Culture Lounge, at Resonance 104.4FM. Her blog, Madam Miaow Says, was shortlisted in the 2010 Orwell Prize for blogs, and longlisted in 2012.

She was the first British Chinese writer and performer to take a show to the Edinburgh Fringe Festival with Suzy Wrong — Human Cannon (1994), in which she memorably gunned down audiences with a pump-action sex doll firing ping-pong balls out of its business end, and was the first to appear on British television, in Stewart Lee and Richard Herring's show, Fist of Fun (BBC2) in 1995. She is the author of I, Imelda 1998; Anna May Wong Must Die!; Taikonaut; and The Steampunk Opium Wars (2012).

Her programmes for BBC Radio 4 (produced by Mukti Jain Campion and Chris Eldon-Lee of Culture Wise) are regularly Pick of the Day or Week in the national press. They include: A Celestial Star in Piccadilly: Anna May Wong (2009) introducing British listeners to the Hollywood legend and most famous Chinese woman in the world in the 1920s and 30s; Chopsticks At Dawn exploring the familiar five-note musical trope cartooning Chinese music; Madam Mao's Golden Oldies looking at Jiang Qing's five model operas during the Chinese Cultural Revolution and what happened to some of the people involved; China, Britain and the Nunzilla Conundrum (produced by Sally Heaven, BBC Bristol) on Chinese trade and the novelty goods we demand from Chinese factories; Found In Translation, about Chinese comedy; Yoko Ono — A Life in Flux (produced by Lance Dann 1999 for BBC R3) about the respected artist rather than the rock chick in which Ono broke her silence and gave her first interview to the British media for years; St Ives and Me in which Anna shared her love of the Cornish artists' colony; and the groundbreaking ten-part series, Chinese in Britain (2007), which drew public attention to the identity of the first documented Chinese person to live and work in Britain, the 17th century Jesuit priest Shen Futsong.

She wrote and narrated the Radio 4 play, Red Guard — Yellow Submarine (produced by Pam Fraser Solomon), based on an extract from her memoir.

Her short story, The Next Wave Home, was published in the anthology, Another Province, which came second in the Raymond Williams publishing award in 1994/5.

Presswork includes writing for the Guardian, Morning Star, New Internationalist magazine, Tribune and South China Morning Post, and appearances as a commentator on BBC World Service and Sky News. She has sat on the ITN Diversity Panel and is one of the few east Asian women of colour visible in the media.

At 14, her poetry was first published in the Jonathan Cape anthology Fire Words. She won the Farrago Poetry Zoo Award for Best London Performance in 2012. Her first collection of poetry, Reaching for my Gnu, is available as an eBook on Amazon and was published in paperback in February 2013 by Aaaargh! Press. (Poetry videos here) A rarity among British Chinese poets and writers — a Chinese Brit socialist poet — she has read and performed at the Oxford University Poetry Society and Oxford Radical Forum, Farrago Poetry, Apples and Snakes, the St Ives Arts Festival, the Stoke Newington Literary Festival, the National Maritime Museum and the British Academy. She hosted the British Museum Late event during the Terracotta Warriors exhibition, and curated various events as well as writing and presenting The Steampunk Opium Wars for performance at the National Maritime Museum to mark the opening of their new Traders Gallery in 2012.

She is a regular at the St Ives Arts Festival in Cornwall, giving poetry readings, hosting Madam Miaow's Culture Lounge at the St Ives Arts Club and, in 2012, brought The Steampunk Opium Wars to the festival. In 2015 she read poetry and performed Anna May Wrong Must Die! at the international Bookworm Literary Festival in Chengdu, Suchow, Ningbo and Beijing — listen to her interview with Radio Beijing.

She has appeared in a Bond movie, dated a rock legend, been drawn by Patrick Heron, photographed by Bob Carlos Clarke and dressed by Vivienne Westwood — she was Britain's first homegrown Chinese Brit punk. Bob Carlos Clarke's photos of her were used on the iconic Streetwalkers Vicious But Fair album, and blockbuster author Stan Pottinger based his character Tacoma Reed in The Boss on her. She survived being mauled by a puma in her beloved Cornwall. She has read scripts for Robert McKee, Ken Campbell and various producers including the late actor Richards Johnson's United British Artists, later his partner in the Script Advisory Service (SAS); read scripts for Palace Pictures and was a script doctor for the European Script Fund; also taught scriptwriting at Bournemouth Polytechnic/University. 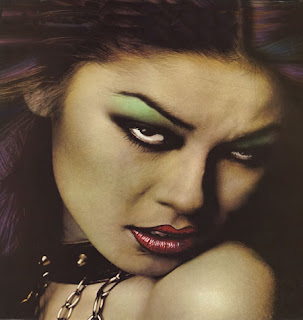 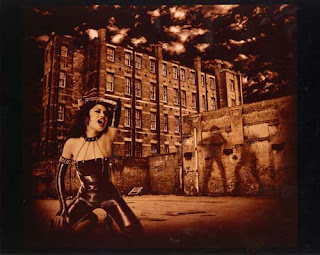 Two images of Anna from the Streetwalkers' Vicious But Fair album.
Of her work, she says: "I always seem to end up grappling with issues of politics, race, class and identity, subverting stereotypes and poking the status quo with a sharp stick. Comforting the afflicted and afflicting the comfortable is a pretty good rule of thumb to try to live by. I strongly believe that a rising tide floats all boats and that it's an artist's duty to make visible the invisible. My role model is Prometheus but I'm not entirely happy with the bit about having your liver pecked out by an eagle every day."

POLITICS: Anna Chen championed the use of mainstream media and press relations in the British left from the late 1990s, founding, organising and directing several publicity campaigns to hit national and international media including: the Chinese Foot and Mouth Disease smear campaign in 2001; the Socialist Alliance in the London (2000) and general elections (2001); founded, launched and ran the press for the Stop the War Coalition anti-war protests (2001-3) culminating in the million-strong London demonstration in February 2003; press launched the radical bookshop Bookmarks' move to its current address in Bloomsbury; and helped kick off the RSC Orphan of Zhao protest by the British East Asian Actors group (of which she is a founder member) in 2012. She is a founder member of the Chinese Civil Rights Action Group UK (CCRAG) which later became Min Quan when it affiliated to The Monitoring Group. Investigative journalist Paul Foot called her the "best press officer in the country," for her pioneering work in the left.

She runs The Hothouse Project, an alternative education series of classes featuring legendary author and journalist Charles Shaar Murray's "Journalism as Craft and Art" Hothouse Course and Anna's own "Poetry Against the Machine" workshop, which she also taught for the Orwell Prize Wigan Pier Workshops in 2013.

Anna writes and presents Madam Miaow's Culture Lounge, an arts series, for Resonance 104.4FM. It launched in 2013 with "Oh Other, where art thou?" looking at yellowface, blackface and ethnic minority representation in UK culture.

“The poems in this collection are graceful, muscular, playful, rich in both emotional depth and intellectual rigour; brimful of righteous anger and piercing wit; intent on revitalising both the truism that 'the political is personal' and its obverse - that the personal is political.”
CHARLES SHAAR MURRAY

“As a poet Anna Chen is brilliant and dangerous. In Reaching For My Gnu she operates one wild-ride roller coaster that soars to altitudes of unfettered wit and then plunges with a startling and implacably knowing anger, stripping away pretence and pretension and targeting both ancient oppression and contemporary crime. 'What work of depravity is a man who amasses more than he can spend in a lifespan?' Her deck of cultural references includes Poe and Freud, Stalin and Hemingway, junk food, Marlon Brando, Moby Dick, and Anna May Wong, and she deals these cards face up with a unerringly sense of history uniquely coupled with a perception that’s as topical as tomorrow."
MICK FARREN

"... a strange rendezvous of language, wit, and the imagination. ... She fully integrates the movingly personal, the vibrantly social and the diablolically political. Her rhyming is frequently quasi-Byronic, full of surprise and acerbic invention ... Burning words, full of life and truth."
CHRIS SEARLE MORNING STAR

"Superb. ... Anna Chen’s poetry wears wet leathers, red lipstick, stilettos – and is heavily armed. Her slim volume, Reaching for My Gnu, is filled with what I’d call 'strap-on poems'. They look like an evening’s easy pleasure but are far more painful and unforgettable than you’d bargained for."
GREG PALAST in VICE MAGAZINE"

"Fucking great. I couldn't put it down." WILKO JOHNSON

"Anna Chen is fighting the good fight with fierce, funny, moving and sulphurous poems. You wouldn’t want to cross her, but you want to read her."
HEATHCOTE WILLIAMS

Reaching for my Gnu is available on Amazon as an ebook and in paperback.

"This marvellous collection builds like a symphony, from its opening dances through the surf of language and ideas to the breath-taking cross-channel swim of ‘Tinderbox plc’. Assured, funny, angry, exhilarating, and with a shout-out to the majestic Bob Devereux for good measure, Chi Chi’s Glorious Swansong demands to be read; demands to be listened to. A triumph."
ALAN MOORE

"Anna Chen’s talent is rare yet what she writes is in a long-standing tradition: as a poet she blends commentary on both the social and the political in sharp, vibrant, often cuttingly funny verse. Highly recommended!”
JACK WOMACK

"Anna, who writes with the power of myth and the sense of reality."
STAN POTTINGER

“Invigorating, engrossing, witty, passionate and righteous – they should put Anna Chen’s The Steampunk Opium Wars on the school history curriculum.”
BEN CHU (of the Independent)

"One thing stands out above all from this blog: the excellence of Madam Miaow's writing. Her commentary is consistently strong, especially on Chinese cultural and political issues, and unsurprisingly - given her comedic background - the sense of humour is top-class. We really enjoy reading this blog not because of its political insight - but simply because it's really, really good." POLITICS.CO.UK 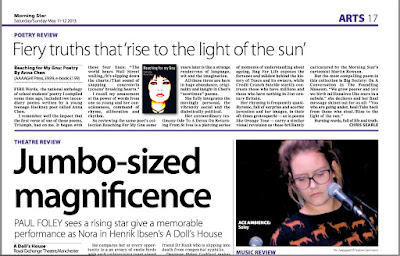 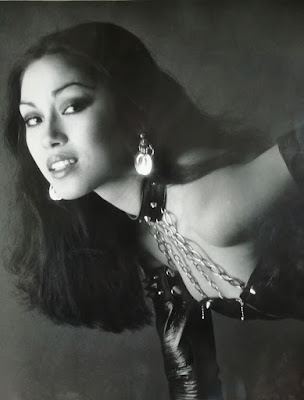 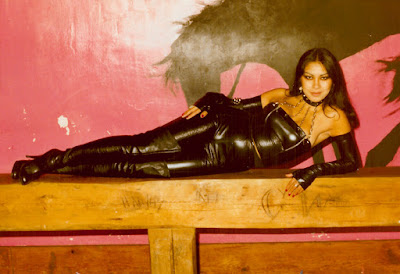 Anna at 18, Britain's first Chinese punk, in the catsuit made for her by Vivienne Westwood, about to be mauled by a puma, later released as the Beast of Bodmin 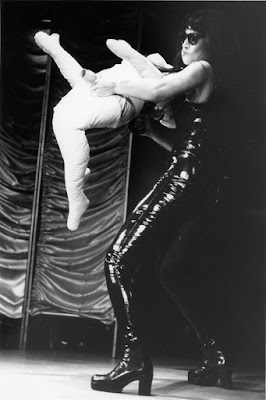 Suzy with her Uzi. Suzy Wrong, Human Cannon, mows down the audience with her pump-action ping-pong ball gun
CONTACT:
madam.miaow@virgin.net