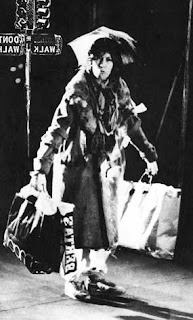 Anna Chen explores the battle of the non-iron lady vs the planet-hating peacock with an ode to crinkles for good measure.

May I say that I hate ironing? I don’t own an ironing board and, while others may sneer at polyester, I offer prayers and sacrifice small mammals to the scientific genius who invented it. Forget silk and wool: some of my favourite fabrics are by-products of the petrochemical industry. I’d have shares in the stuff if I could afford it. And if it wasn’t a total capitulation to capitalism, comrade.

What’s wrong with crinkles, anyhow? Characterful, and proof of a life lived in the tricycle lane. Or sleeping on the sofa in front of telly bingo which, I understand, is the preferred cultural activity for the modern student, according to respected pundits such as Richard Littlejohn – and we know how much his opinion counts.

No, I like to launder and wait for the creases to yield to the warm glow of perspiration during wear. I may be a sweatbucket by the end of the day, dampness being part and parcel of the synthetics experience, but I look perfect. It’s a marvel – the stuff practically maintains itself.

I bought an iron once. A super-duper mega-expensive one the price of the GNP of a small African nation done over by the World Bank and IMF, in the hope that such profligacy would encourage me to damn well use it. It was so fancy with its water-softening cartridge and turbo-charge whatnot that it soon became obsolete as the next generation of technology swiftly replaced it, and the cartridges disappeared from the shops. The last few times I tried to use it, I left a fossilized snail-trail of calcification across my (exclusively) black wardrobe. Not attractive. I looked like a health hazard and tasted of limescale.

So I don’t iron. I cook instead, a skill worth having in the dystopian post-apocalyptic nightmare staring us in the face. If I am to compete with the cockroaches then I’d rather be a sated slummock than a starving clotheshorse. Speaking of which, just how pretty do you think skinny supermodels are going to look in a world where there may be occasion to eat your Loved One the way polar explorers get maximum mileage out of their huskies?

Not owning a tumble dryer either, I can pride myself that my domestic slovenliness contributes to the well-being of the planet. So, next time you see an immaculately ironed frock, graffiti the planet-hating peacock for wrecking the environment. Only don’t use an aerosol.

Ironing...what a pain.. some people find it relaxing. I have done the ironing and have ended up watching the telly in a hypnotic way. That's ironing for you.

Ironing is best done whilst listening to Ginnie Wade warble on/commentate during the Wimbledon finals. It's hilarious! I do admit that the last time I listened to her make up some complete rubbish was during a final between Steffie Graf and someone. I put my iron down so many times and said "WTF?" that I gave up and never took up ironing again.

As for cooking - I have daughters.

Maybe a nice long play on Radio 4 to zonk out to. I may bite the bullet one day soon and buy an ironing board. A towel spread over the coffee table doesn't cut the moutard.