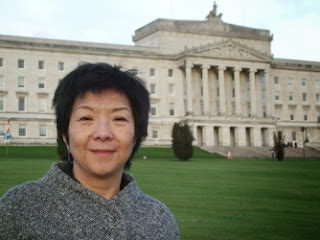 Having chased out 100 Romanians from Belfast, racist loyalists in Northern Ireland have set their sights on Anna Lo, the United Kingdom's first Chinese-born politician elected to national Parliament, and the sole ethnic minority member of the Northern Ireland Assembly.

According to a report in the Belfast Telegraph, police have warned her that she is under threat of attack.

Far right groups have also threatened Polish and Islamic centres in Belfast. Brain-bogglingly, some of these charmers are said to fly the flag of Israel beside their own. Go figure!

It's hard to understand why there's been a revival of old hatreds with foreigners now added to Catholics as fuel for bigots. How would they like it if decent hard-working Protestants who work abroad were given the same treatment? Actually, come to think of it, they probably wouldn't even care.

Anna Lo is incredibly brave and I hope she gets maximum support from everyone who wants peace in that beleaguered nation.

She's been very strong over the attacks on the Roma, and that's not just a commentary on her character but hopeful for building solidarity. There are small and vulnerable groups like the Roma, and I know African refugees have had trouble in the past, who don't really have any representation. That means the bigger and more organised minorities - the Chinese and the Poles - are so important if we're to have a serious stand against racism.

I'm sure if this happened to a politician in Britain there would be a huge scandal. And the people involved really do deserve to be scandalised. Although they probably don't care.

The Israeli flag thing shouldn't really be that surprising. The far right in Northern Ireland, as in the US and Britain, is a hodge-podge of conflicting interests.

There's a healthy dollop of Christian fundamentalism involved in all three places. In the US this hasn't prevented linage between Zionist groups and the Christian Right - see Chris Hedges book "American Fascists" for some good anecdotes and analysis.

At a more basic level though, the Israeli flags are simply meant to represent a challenge to Republican sympathies for the Palestinian: in nationalist areas one sees Palestinian flags flying now and again.

Embattled minorities, besieged majorities - the analogies are all a nonsense of course.

So do they fly the flags more as a wind-up than committed support as with the US Christian fundies?

It's very difficult getting the Chinese community to stand together, but especially sad considering they now have a brave spokeswoman in the form of Anna Lo.

The last time I remember this happening was when the New Lab government tried to stick us with responsibility for the Foot & Mouth outbreak (2000 or 2001). The Chinese community was magnificent and won an apology and vindication.

BTW, thanks for the link, Dave.