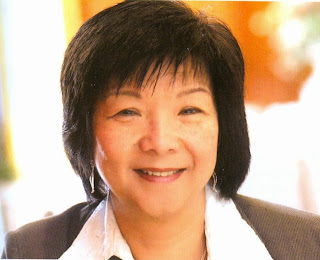 Yesterday's first ever UK Chinese hustings, featuring five of the eight Chinese parliamentary candidates running in the general election and attended by an almost entirely Chinese audience, was an interesting if disappointing affair. Organised by bbcchina.com and bbcchinese.com, this was a much-needed initiative considering that Chinese are the third-biggest minority in the UK, but you were left with the impression that the candidates represented solely the business class and that there was barely a cigarette paper's width of difference between them.

Your faithful reporter nearly fell at the first hurdle. After the first round of introductions in which most of them extolled "hard work", business and the family, I thought I'd wandered into meeting of the Women's Institute circa 1935. In Germany. It made me want to dial Nein, Nein, Nein!

Only the fabulous Anna Lo, Alliance member of the Northern Ireland Assembly and the UK's first Chinese politician, stood out. She's my hero, having done socially conscious work in Northern Ireland for twenty-five years, courageously defended persecuted Romanians, and earned herself death threats for her pains. How'd you feel if Loyalists planned to march past YOUR house?

Sonny Leong, Chair of Chinese For Labour, manfully represented the Labour party. They have yet to produce any Chinese candidates, but he assured us that a few are being groomed for the next general election. He is an intelligent, stylish chap with a big heart but sometimes I do feel sorry for him having to defend the indefensible, which — actually possessing personal integrity and considerable communication skills — he manages to avoid, preferring to promote Labour's ideals.

Former Metropolitan Police Officer George Lee is the Conservative standing against Frank Dobson in Holborn and St Pancras where he, like the others on the panel (aside from Anna), stands not a snowball's chance. With a bouncer's build adorned by a smart black suit and crisp white shirt with what my mate said was one button too many undone, and hair side-parted in a thick black wave you could surf on, I was unsurprised to hear a voice not unlike Del-boy Trotter emanating from him. He Trottered out the Tory line and was quite the little terrier when nipping at his opponents' heels. Expect to see more of him in the media.

The other Tory, Kagang Wu, standing in Liverpool Riverside, was a speak-your-weight-machine.

Lib Dems Merlene Emerson (Hammersmith and Fulham) and Philip Ling (Birmingham Bromsgrove) were sweet but not terribly effective. Oddly, Philip came to life in the bar afterwards and is a very likeable guy. He almost won me over with the Lib Dems' pledge of a 50p rate of tax, a £10,000 allowance before tax kicks in, scrapping the council tax and bringing in a fairer method of taxation closer to the old rating system, and their initial opposition to the Iraq war. But, oh, Philip, your party's record on race in councils where you've had power has been most unimpressive. Not that the others have been Martin Luther Kingy about such matters.

Hosts Britt Yip and Paul Crook, who had perfect Mandarin being born and raised in Beijing, did a fair job in keeping the rather dull question coming. It was all business, Chinese ethnicity, Chinese business. Fer cryin' out loud, we can do more than this!!!

Unfortunately, my question (the third or so to be asked early in the webcast show) was the only one they quickly moved on from, neglecting to elicit an answer from the panel.

The opening comments from the producer had contained the throwaway remark that we were all relieved that the expected train strike had been stopped by the courts, allowing the event to take place. Implying a universal class view that placed workers who were fighting for their survival somewhere Over There, and the "norm" here in this room, he did make me bristle somewhat. The assumption that the general public consensus is opposition to trade union action was something I thought should be challenged by anyone serious about the democratic process.

This attitude does remind me of the Morlocks and Eloi of HG Wells's science fiction social satire, The Time Machine. Whenever I hear the term "the work ethic" springing from captains of industries and their mini-mes, it makes me think of the troglodyte Morlocks dining off the flesh of the cattle-like Eloi: we work hard for poor pay and worsening conditions so you can live off the fat off the land.

So, after pointing out to George that his accusation that Gordon Brown started the recession due to his raid on pensions was a bit rich considering it was his own Margaret Thatcher who had started the practice with such sickening relish, I asked them: where do you stand in relation to ordinary workers defending their rights?

You'd think, given that this was the first of only two class-based questions in a quagmire of ethnicity and business, that this deserved to be addressed. But noooooooo. They moved on, later pleading time constraints which was, given how long some of the other got for their dull, dull, DULL comments, an utter crock.

George blamed the recession on Labour's housing policy. When some of them, including Lib Dem Merlene, claimed our current situation was due not only to bankers but to a "bloated public sector", some in the audience saw red. Long-time Labour councillor Mee Ling, speaking from the floor, pointed out the folly in this argument, reminding George that Thatcher's council property sell-off infamously deformed Britain's housing market, finale-ing with the observation that a healthy public sector is the mark of a civilised society.

She received a round of applause.

So be warned. Whatever horrors Labour would inflict in sucking up to the City, the Tories and Lib Dems will be even worse.
Posted by Madam Miaow at 4/08/2010 10:20:00 am

And you have to go and interrupt the mutual backslapping with a spoilsport question like that? What about the workers? They're out there somewhere...

It'll be interesting to see how Anna Lo does in South Belfast. She's an incredibly brave woman who has done a lot in terms of being a tribune for oppressed minorities in the city.

I didn't know Chinese were the 3rd biggest minority in the UK... I would have never guessed...

Yup, a bit over 400,000, Nevin. The Chinese are/were the largest minority in Northern Ireland. Where I hope, Splinty, that Anna Lo does amazingly well.

Another well observed and witty piece from our Madam. Yes, her question was neatly skirted over - of course the chinese community consists of only entrepreneurs with no working class behind our business people! Well done Anna Lo - she was frank, honest and clear and not the usual soundbite parrot, unlike the other PPCs. Sonny gave clear and precise answers and made some new thought provoking points for all of us to consider. Lillian

Thank you, Lillian. A great idea but poorly executed on this occasion. As it's their first such event, let's hope they allow a wider range of opinions next time that reflects all UK Chinese instead of the programme-makers' class bias.

Very sharp observation and I like it very much.

I came across your blog while doing research for my radio documentary story about the Chinese involvement in UK politics.

I'm wondering if you are available for an interview. It would take around 5-10 minutes.

And a bit about me. My name is Yong Wang. I've been working for 5 years in TV news center of Shanghai Media Group, now named Radio & TV Shanghai.

This radio interview is for one of my course assignments, and I might put it up online (or if you prefer not, I won't do this.)

I also blog at http://padever.wordpress.com (shame for me not updating often).

Thank you very much.