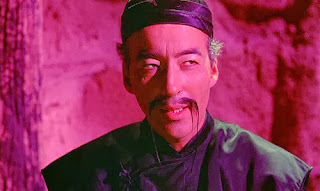 Even Radio 4 is at it. Hard on the heels of last week's Sherlock oriental hate-fest, my beloved BBC Radio 4 has just broadcast someone called Miles Jupp presenting a thinly disguised bit of sinophobia celebrating one of the most notorious exercises in colonialist literature: Fu Manchu In Edinburgh.

While it's valid to explore the imaginary world which an iconic literary creation inhabits, the unquestioning depiction of Chinese as dehumanised hate-figures in the almost utter absence of humanised Chinese in the culture is fairly loathsome, not to mention irresponsible. The (il)liberal peppering throughout of orientalised buzz-words such as "fiendish" and "diabolical" only reinforces the suspicion that they've dug up Leni Riefenstahl and hired her as executive producer.

So what were these stories of which Jupp is so fond?

Anglo-Irish author Sax Rohmer finally hit paydirt in 1913 with a nasty series of novels embodying paranoia and hatred for an entire race embodied in the character of evil Dr Fu Manchu. Rohmer (born Arthur Ward) rode the vicious Yellow Peril wave, presenting Chinese as subhuman, cruel and degenerate, although he was actually projecting the cruelty, degeneracy and inhumanity of a nation that could go to war in order to impose at gunpoint the consumption of opium on the Chinese in the nineteenth century.


It is commonplace nowadays to note the inherent racism of English fiction at the beginning of the twentieth century. Sapper, Dornford, Yates, John Buchan, Edgar Wallace are targeted as the promulgators of a fearsome and totally irrational hatred of all things foreign. For them, the Black, the Chinese, the Argentinian, the Levantine and the Jew become sinister 'niggers', 'chinks', 'dagos', 'greasy Levantines' and 'oily Jews'. The race hatred of these authors employs a feverish conjunctivity, with oily Jews as both capitalists and 'bolsheviks', or Chinese who are both mandarin warlords and opium den keepers in Limehouse. Moreover, when not acting themselves these essentially cowardly employ peculiarly simian dacoits or things of a polyglot and nauseous origin.

This invention by a lower-middle-class writer for his similarly conservative-minded brethren diverted class anxieties and fears about an emerging working-class empowered by the unions onto an exotic Other. The desire for status quo and hierarchy was fought in the battles between hero Nayland Smith and the wily doctor.


Miles Jupp investigates the hidden connections between Edinburgh and Sax Rohmer's criminal mastermind Fu Manchu. Did the 'Devil Doctor' get his doctorate at Edinburgh University?


Er, could the answer be 'no', because this was the invention of a propagandist hack? Jupp's dialogue with the scientist concerning the use of toxins derived from low forms of life — fungus and flies — by subhuman lowlife Fu Manchu sounds like a documentary about a real criminal mastermind and his baroque methods of assassination. He ends by urging Edinburgh University to mark the attendance of Dr Fu Manchu. Yes, nice to know where he learnt his homicidal trade, then.

I missed this programme when it was first broadcast in April, otherwise I would not have been backward in coming forward and vomiting all over this insidious crap at the time. I presume that it is the success of Sherlock which has prompted this repeat transmission.

Why are they trying to rehabilitate this lurid pulp as some sort of accurate representation of the Chinese? "It's only a bit of fun," cries the halfwit as he perpetrates some atrocity on a dehumanised minority. I'm not the first to note that there's no way they would get away with this sort of depiction of a racial or cultural group of people had it been Jewish, gay, black or south Asian, and quite rightly so. (I've excluded Muslims as they get shafted even worse.) So why is there a drive to do this to the Chinese? It's not the Chinese who have devastated the Middle East with wars for oil and dominance. What is the BBC's (and certain other media's) agenda in reviving these fantasies?


And why is it that 'So vehement and repetitive were Sax Rohmer's references to Asiatic plotting against "white" civilisation that they cannot be explained simply as the frills of melodramatic narration. The man clearly was possessed by some sort of private dread'?


I can think of some others to whom that would apply.

I'm beginning to think that with the inexorable drip-drip-drip of poison (Hey! A cruel Western Media Torture!), there are those who won't be happy until there are anti-Chinese pogroms and race riots in Britain.

What was the point of me making Chopsticks At Dawn or Anna May Wong: A Celestial Star In Piccadilly for BBC Radio 4? Here's what I think of their orientalist clichés (the last two poems).
Posted by Madam Miaow at 8/08/2010 02:19:00 pm

Anent this, I sent a link to a New Yorker story I haven't read yet to that guitarist who lives in your place, which examines the Charlie Chan books, and the actual Hawaiian detective (whose name I believe was Chang) who inspired them to some extent. Happy to send it directly, but I lack an address.

just listened to it on iPlayer and it's dreadful, utterly dreadful, lacks political insight just capitulates to this racist stereotype of the so-called "yellow peril"... No critique. No nothing of analysis... Why are they doing this? I felt like I had been transported back yet worryingly this is something made in 21st century......

Thank you very much, Ed. Email Charles to get my email.

Harpy, it is truly half-witted. Racism as play? Nice.

The Blind Banker presents the Chinese in a wholly negative light, pandering to and resuscitating racist stereotypes and antiquated prejudices which I thought had long since died out.

They then compounded this insult to an entire race of people — 500,000 of us living in the UK, many of us second-generation native-born citizens — by broadcasting a Radio 4 programming presenting the Yellow Peril figure of Fu Manchu as if he was a real person. No attempt was made to subject these prejudices and stereotypes, coming as they do from a thankfully bygone era, to any kind of modern interrogation. Instead, they were re-imported, intact, into the present day.

They would not -- and could not -- have done this with any other race. I cannot imagine blacks, South Asians, gays or Jews being treated in such a hostile and derisive fashion.

The previous Minister of Culture, Ben Bradshaw, pointed out that there were hardly any Chinese faces in the media or being represented in the culture. When they fill the vacuum with dehumanising depictions such as those populating these two programmes, they do a grave disservice to a significant section of the population, many of whom pay their licence fee.

I wonder if they still have a functioning diversity section at the BBC?

The fear that C21 will be 'the Chinese century' in the same way that C20 was 'the American century' manifests itself in all sorts of odd ways. Innit?

Aaah, that gittar guy never answers my e-mails. anyway, this was in the Times today. Pix and everything:

Coincidentally, a British academic sent me the same article today.

A depressing final line. I wonder why they want Fu Manchu? Reflecting fear and envy of the new superpower?

Incidentally, my father quite liked Charlie Chan despite the character being played by an actor in yellowface. At leasr they were trying to be respectful.

I'm not even RECEIVING yr emails!

Facebook me with yr address and we can chat it up BIG time!

It's annoying the way that certain Chinese words have been introduced into English in this way. Everyone in the UK knows the word "Manchu" in relation to "Fu Manchu", but I doubt anyone much knows about the Qing Dynasty or Northeast China.

The same goes for "Ming" - the word inevitably evokes thoughts of "Ming the Merciless", who's basically a Chinese villain running a whole planet.

Recently had cause to think about the Fu Manchu movies from the early fifties being used as propaganda vehicles, coinciding with the anti-Chinese paranoia connected to the Korean war(brainwashing etc) and which connect directly to McCarthyism. I found myself in a discussion with a group of American film goers. Was surprised how persistent and deep these prejudices can be.