The Triumph and Turmoil of Niall Ferguson's obsession with China, Channel 4: review 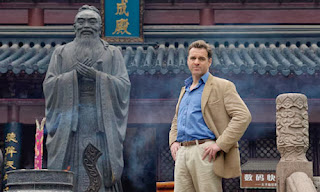 I knew the nutty Professor wouldn't let me down.

"Could China’s rise repeat the same disastrous trajectory of Germany a hundred years ago? It’s something to ponder the next time you order a Chinese takeaway." So says Niall Ferguson in the Radio Times even as the US moves forces out of the Middle East where they've done such a fine job and into the Pacific.

There are some who think that America is closer to Weimar hyper-inflation than the Land of the Rising Renminbi, and China tends to purchase its raw materials rather than send in the troops, but it doesn't make for as good a scare story as the humble takeaway as outrider for the new Chinese empire.

In Channel 4's China: Triumph and Turmoil (Mondays 8pm) Ferguson takes us from 250 BC to the present day and the Chinese "huge potential for venality" with no mention of Jardine Matheson, Western banks and drug money liquidity in 2007, hackgate, Empire, an accelerating number of wars on foreign soil or even the Opium Wars.

Niall shows us little old ladies playing mah jong because, he says, this is how we Chinese launder our ill-gotten gains. Children draw beautiful calligraphy as visual filler for yet more fear-laden drivel. We are sinister, we are robots, we are less than human: thank goodness we have been found out by the Yellow Peril Finder General. "They think differently," he growls. No, Niall. We think.

He's actually paid for this.

Niall shows us how awful it must have been to live under the First Emperor Qin Shi Huang (259-210BC). What did the Emperor ever do for us? Apart from standardising the language. And the currency. And the Terracotta Army. He burned books and he killed scholars. Two thousand years ago. Of course, what I'm really jonesing for is to live in mediaeval Europe 'cause I'd look good with buboes and the robber barons were sort of hippies if you overlook the weapons and the rape and the pillage. (Niall keeps referring to "Qin" as if this is his surname whereas his personal name was Ying Zheng. Keep up, Ferguson.)

Who could forget Niall's terror of Chinese male sexuality in Newsweek?


That has scary implications. ... It may be that the coming generation of Asian men without women will find harmless outlets for their inevitable frustrations, like team sports or videogames. But I doubt it. Either this bachelor generation will be a source of domestic instability, whether Brazilian-style crime or Arab-style revolution—or, as happened in Europe, they and their testosterone will be exported. There’s already enough shrill nationalism in Asia as it is. Don’t be surprised if, in the next generation, it takes the form of macho militarism and even imperialism. Lock up your daughters.


The trouble with this Top Gear school of history is that valid criticism, such as the very real corruption scandal of the billions stolen and taken abroad (helped by Western banks), gets lost in the fog of some old geezer's paranoid ramblings (there's an entire series of this to come). Instead of thoughtful analysis which would allow a deeper understanding and dialogue, we find ourselves being hard-wired for a military conflict further down the line once we've done over Iraq, Afghanistan, Libya, Syria, Iran, Venezuela and Russia. Hello, George Bush senior's New World Order.

The British media, once the best in the world (by my limited reckoning), now indulges such ill-informed racist nonsense. However, if you can get past the collective raspberry being blown on Twitter during last night's first episode, a quick scan of tweets shows that viewers are generally better informed than this throwback to Empire. Edward Luce in yesterday's FT — headline: Welcome to the new China-bashing — observes that the US trade deficit with China stands at £300bn, and we always tail the Americans. Damn those cunning orientals and their enormous tax breaks for investors!

Meanwhile, back here in the country with the highest number of CCTV cameras per head of population, where our government scrambles to withdraw us from European Human Rights laws, I look forward to the Olympics in the Land of the Free.

Great piece Anna. Ferguson is a total jerk. And his paranoid horror of 'Asian men without women' was once applied to Iran, where he suggested that higher fertility rates would lead Iran to carry an act of collective nuclear suicide. See:http://www.telegraph.co.uk/comment/personal-view/3622324/The-origins-of-the-Great-War-of-2007-and-how-it-could-have-been-prevented.html

I couldn't help but notice that you chose to put a link to this post on the "BBCZEITGEIST" blog. I realise that you're only trying to broadcast to a wide a audience as possible, but a cursory look at that particular blog would have revealed it to be a racist, vitriolic, chauvinistic, misogynistic, anti-semitic stream of unmitigated drivel. Perhaps a more discriminating approach would have been in order, especially as the authors regularly inveigh against "half-breed" mixed-race BBC's, such as yourself.

And there's me thinking you were exaggerating, Oomkles. I just checked it out. Very sad. Thanks for letting me know.

Please don't think it was a criticism of any of the points you raised above; it was simply worrying that you posted on a site which is essentially the BBC equivalent of the BNP! Great article, by the way.