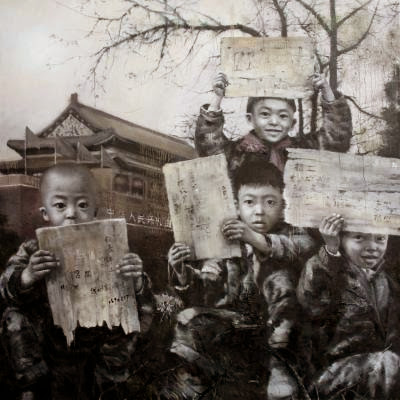 I quite fancy going to see the exhibition of Li Tianbing's paitings being shown at the Stephen Friedman Gallery.

I know nothing about Li's art except for what I've been reading today, including an intriguing piece at Art Lyst.

Li is quite young, born in 1974, the year I visited China with my parents. Still a schoolkid who wanted to be an artist, I was shown around Shanghai University's art department and, with my mother in tow, allowed into their gallery to view the work of their students. It was an impressive display with superb technical ability on show in a range of styles from traditional watercolours to Western oils.

We soon noticed a common trait in the landscapes that amused us. Every one featured a tractor. You didn't need to be a student of Kremlinology to see who'd go far. We guessed that the artists with the in-yer-face bright red tractors taking up the biggest area of canvas would climb the greasy career pole faster than the painters who appeared to have used the finest sable brush with about two hairs to make the most parsimonious stroke of red possible denoting the presence of the people's farm vehicle in the furthest reaches of the landscape, several miles distant. We thought they may very well have a had a future kneeling on glass and would have been lucky getting a job painting white lines down roads in the middle of traffic. Which, consisting mostly of bicycles in those days wouldn't have been as bad as it sounds.

Anyhow, a look at Li's paintings places him in the latter category and on the naughty step.

Take the painting above — Recruitment — of four children holding up official information pamphlets. At first glance it's a rural portrait of poor kids. Art Lyst says:


Like many of Li Tianbing's paintings, the work is pock-marked with black ink-like stains - a reference to photos the artist once saw of the Khmer Rouge, whose deteriorating surfaces convey a haunting connection to an obliterated past. This stain motif is used time and time again as a reminder of the corrosive power of political dictates and is a haunting yet powerful motif.

What struck me is what he's saying in the picture. Where are the official pamphlets being held? Think of the Three Wise Monkeys and see how the paper is held, left to right, over the mouth, the ears, almost over the eyes which are almost obscured, and then, adding a new figure, the boy who is standing holds his pamphlet over his head: think no evil. Or just: don't think.

Not only that but, behind them, emerging from the group, are leafless trees: dormant, wintry. Two of the trees go nowhere, hitting the dead end of the top edge of the picture. But the fourth one we see in it's entirety (a third one is in view but stunted): what's it doing? It is not heading towards the light but is bent. And what is it bending towards? The left (the past in western terms as we read left to right — Li did study in Paris, after all), and towards the old traditional building. It also forms a circle and an anti-clockwise (backward) cycle from which nothing breaks out. Far from being an innocent flat snapshot of a historical moment, this is a bitter caustic comment on what Li believes the system is doing.

It is sad that the system that once promised to break the masses out of their spiritual and intellectual poverty, having raised hundreds of millions out of physical poverty and doubled life expectancy, is now seen by some as trapping them in a deadening cycle. Agree or not with what he's saying, this picture is powerful because it is so loaded with meaning. And he's a bloody good draftsman.
Posted by Madam Miaow at 3/23/2012 10:21:00 pm