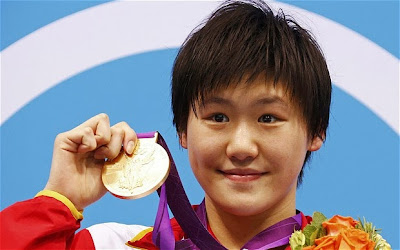 Sour grapes or what? Where's that famous British sporting sense of fair play? Having failed to make the doping charge stick, the liberal media are now insinuating that there must be genetic engineering behind Ye Shiwen's stunning 400-metre gold-medal win on Saturday in the individual medley.

If so, the Chinese can't be very good at it as they'd have had a squad of super-athletes smashing all the records rather than one solitary outstanding sportswoman. Selective breeding, perhaps. China could learn a thing or two from our royal family, they being so very good at It's A Knockout and playing with their ponies. And it wasn't Chinese scientists who tried to copyright the human genome for private profit.

There's something cruel about labelling this 16-year old as a cheat in front of the whole world as the BBC's Clare Balding and US swimming coach John Leonard did despite having no evidence. Poor kid comes good and now she's forever linked with an Olympics scandal. The home country's media tactic seems to be, "we'll make them choke on their victory".

The international athletes, however, have supported Ye and pointed out that it's not uncommon for swimmers to put on a spurt in their teens, as the 15-year old Lithuanian swimmer did. And it's not true that Ye outswam "a man" (shock, horror) although that would have been nice. In fact she was 23 seconds slower than Ryan Rochte but, as he slowed down in his final length when he sensed victory in the bag and she swam for all she was worth, she ended up being faster for the last 50 metres.

Meanwhile, Michael Phelps' astonishing run of 19 medals over his career — including eight in Beijing — is rightly accepted for what it is: an astonishing feat. But it's only valid when it's the US that's doing it. Dave Renton writes:


Of all the various arguments behind the suggestion that Ye Shiwen, the 16-year-old winner of the women’s 400 metre individual medley, is a drugs cheat, the most compelling is that she has reduced her time for the 100m freestyle in a year by 7 seconds. US coach John Leonard says this is an impossible rate of improvement and compares Ye Shiwen to Michael Phelps, Leonard rejected comparisons to Michael Phelps, who broke the 200m butterfly world record when he was just 15, saying the American got “consistently faster every year on a normal improvement curve”.

You will notice that Shiwen’s 2012 time is quite a bit faster than her 2011 time, but barely faster than her 2010 time, i.e. like quite a lot of professional sports people her progress has not been continuous, but punctuated, with (presumably) a growth spurt coming at just the right time.

I don’t see any significant difference between their improvement rates at all.


One comment at the Guardian (where 98% of the poll says Ye deserves an apology) reads:


There was a spate of doping scandals in Chinese swimming in the 1990s but the tail-end of cold war competition meant that several countries were at it, not just China. And don't forget golden boy Linford Christie's substance escapades. As Renton observes:


Nor is US elite sport exactly drug free – at the climax of the athletics, in the men’s 100 metres, American eyes are expected to turn to Justin Gatlin, winner of the US Olympic trials, and banned in 2006 for 8 years (reduced to 4 on appeal) after a positive drugs test.


Chinese improvements are in part down to the fact they that they "have no comfort zone": Chinese athletes train harder, as one British coach working with the Chinese swimmers points out.


Although not head coach, I am in the Olympic Village with the Chinese team. I must say, taking aside the performances for a moment, the vast majority of comments on this (and many other sites I am sure) are riddled with inaccuracies and speculation.

I am certainly not aware of any talent ID programme – I am coaching five swimmers on this Olympic team and three of them I selected myself when they were 13 years old. No one "advised" or told me who to select – I just used my experience and "trained eye" to spot the guys I thought would be good.

Chinese athletes train incredibly hard, harder than I can explain in words and as a coach who has placed swimmers on five different Olympic Games teams, I have never seen athletes train like this anywhere in the world.

They have an unrelenting appetite for hard work, can (and will) endure more pain for longer than their western counterparts, will guarantee to turn up for practice every single time and give their all. They are very proud of their country, they are proud to represent China and have a very team focused mentality.

Let's also not forget that this is their only avenue for income; most do not study and sport offers them a way out or a way up from where they and their families currently live in society. If their swimming fails, they fail and the family loses face.


Newsnight, which pushed the boat out last night with the genetic engineering smear, is acquiring a habit of denigrating young women in the public eye. Working single mother Shanene Thorpe had to vigorously defend herself after they depicted her as a benefit scrounger.

The drugs body, which tests all the winners, may have cleared Ye. Lord Moynihan, chair of the British Olympic Association may have said: ""She's been through Wada's programme and she's clean. That's the end of the story. Ye Shiwen deserves recognition for her talent." But the media is still at it with the Guardian sourly headlining Ye's second gold-medal swim yesterday: "Ye Shiwen calmly takes another gold amid drug claims."

Today there's another uproar concerning the Chinese, with South Korean and Indonesian badminton teams also supposedly under-playing in order to compete with the weaker teams. The Chinese team is said to have thrown their game in order not to play their compatriots in the semi-final. Unlike with the Ye Shiwen case, there may be a case to answer, as reported in the Chinese press, with claim, counter-claim, and a knee-injury.


If this proves to be true then it is appalling and needs to be knocked on the head tout suite. Whichever way this one pans out, at least we've all forgotten the scandal of the acres of empty seats at the fantabulous London Olympics.

My article in the Guardian.

The unfair smear campaign in The Slate.

David Hughes in the Telegraph on the witch-hunt started by Clare Balding.

In the Guardian, 98% of readers who voted in a poll said Ye deserves an apology. So why are respected publications and outlets keeping this up?

Here's a proper Olympics scandal. Workers living in flooded squalour and paying £18 per day for the privilege whether they're given work shifts or not.

NOTE: The People's Republic of China only competed in the Olympic Games in Helsinki 1952 and did not rejoin the summer Olympics until 1984, missing the bulk of the notorious doping rivalry between the US and Soviet bloc that was a hallmark of the Cold War.
Posted by Madam Miaow at 8/01/2012 08:35:00 am