RSC The Orphan of Zhao review: Aladdin for middle-class grown-ups 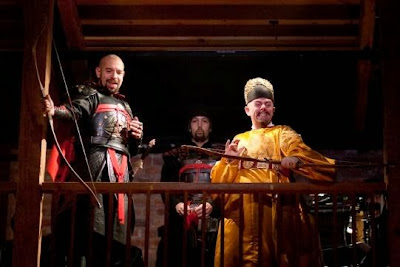 At last it is out. I've been champing at the bit, positively having a conniption while all the reviews came out, but finally mine is published and here it is.

A quick update: the British East Asian Artists have sprung up to challenge these archaic attitudes towards us and had brilliant support internationally from the United States of America (thank you Aapac and everyone), Australia, Canada, Hong Kong, Malaysia, Netherlands, Singapore, France, Spain and Portugal.

Here at home two BEAAs have been added to the steering committee of the Arts Council England, Equity and SOLT/TMA event "designed to facilitate introductions, increase understanding and broker partnerships between East Asian actors and theatre makers and the wider theatre industry." Expected some time in February.

The BEAAs are working to take their campaign to the next step to ensure we can take our place in British culture — it's OUR culture as well.

Sometimes it's useful being the barbarian at the gate. This "outsider" role has been imposed on British east Asians by top-ranking arts institutions for far too long, so don't blame us when we warm to it. "Normal" roles are denied us unless they're race-specific with a "Chinese connection", and sharp white elbows mean we often don't even get those. The welcome policy shift towards cross-racial casting — intended to give ethnic minorities a fair share of parts, representing British society in all its glorious variety — has led instead to one-way traffic and exciting new opportunities for white actors to scarf up the juiciest Chinese parts.

Take the hallowed RSC's latest offering: a reworking of the traditional Chinese classic, The Orphan of Zhao, dating back 2,500 years: Ji Junxiang's 13th-century version merely the best-known, but here credited solely to adapter James Fenton as part of the RSC's A World Elsewhere trilogy which includes Pushkin's Boris Godunov and Brecht's A Life of Galileo. Only three out of 17 actors are east Asians, but none in leading roles, thereby missing a golden chance to rectify invisibility with something imaginatively groundbreaking. So blatantly unfair is this casting that it's fomented an unprecedented uprising by fellow British east Asian actors and an international controversy.

Orphan is a good old blood-and-guts revenge story, set in ye olde feudal China. Sexually degenerate Nero-like Emperor murders for pleasure while his favourite minister, Tu'an Gu, a black-clad Ming the Mercilless villain played charismatically by a shaven-headed Joe Dixon, plots to grab power. Gu wipes out his chief rival (the noble Zhao Dun) and his entire clan, but misses the baby borne by Zhao's wife, the Princess, the Emperor's daughter. The child grows up to avenge his family and take his rightful place.

As bloody as any Shakespearean or Jacobean tragedy, the story is somewhat cruder. Despite its "Chinese Hamlet" reputation, it features no deep philosophical musings on the meaning of life. How could there be in a story so infused with Confucian fetishisation of hierarchy? The plot turns on the assumptions that aristocracy will out, true blue blood is all, and everyone's lives are subordinate to the blood line.

'Adapted' this may be, but updated it's not.

When Doctor Cheng Ying (Graham Turner) swaps his own newborn son for the aristo, condemning his baby to certain death, there is no sense of inner struggle for this mysterious Eastern cypher. Cheng's motivation is as absurd as it is creakingly mechanical: "He must be given a chance to grow so that justice can finally be done" — a line typical of the subtext-free character of the dialogue. Even his wife, despite begging for her child's life, hands him over without a fight. The Herodesque slaughter the sacrifice is supposed to stop is a dramatically undeveloped afterthought. However, the Pythonesque trail of deaths by a series of plot-devices on legs, including a ninja — Japanese! — assassin Glasgow-kissing himself against a wall is, at least, inadvertently amusing. This is Aladdin for middle-class grown-ups.

The story's appeal to the resurgent 19th-century mindset dominating too many of Britain's cultural institutions is clear. Sex and cruelty: a wonderfully exotic orientalist fantasy for middle-Ingerland. They even fly in four severed heads the colour of the Peking ducks you see hanging in Chinese restaurants, last seen in the ENO's Turandot where the psycho Princess's murdered lovers are suspended in the palace kitchens.

Scratch a liberal and you'll find antiquated colonialist attitudes they don't even know they possess, reinforcing some startling class-and-race political notions. In a potent illustration of these unconscious assumptions, the four ethnic actors playing servants kow-tow in a line while the white actors — Cheng Ying, his wife and nobleman Gongsun Chujiu — play their scene: a snapshot which speaks volumes.

Chris Lew Kum Hoi has one moment to shine at the very end, playing the ghost of Cheng's child. He does it beautifully.

It's fascinating to watch the establishment close ranks over this play. White males of a certain age, desperate to convert paunch into punch, flailing and failing to land one on us because, even by their own liberal criteria, they are on the wrong side of history. We ghosts are materialising and pissing in their prawn balls.

well, well my dear..you can always take a pointer out of Kit Marlowe's book..then again perhaps your a bit too long in the tooth to get poked in the eye with a sharp stick_