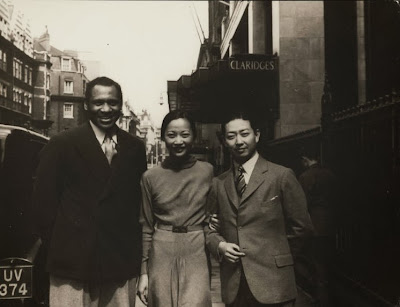 In this Tuesday's Madam Miaow's Culture Lounge on Resonance FM, the world's first internationally renowned African American singing star Paul Robeson and the Hollywood screen legend Anna May Wong chat about their lives and why they are now cultural icons. Well, they would if they were still alive.

However, we do have Tayo Aluko whose award-winning show, Call Mr Robeson, has played around the world. And Anna Chen — who introduced new audiences to the Chinese American film star in her 2009 BBC Radio 4 profile, A Celestial Star in Piccadilly, and has performed her solo show Anna May Wong Must Die! — talks about Anna May Wong who became chums with Robeson when they met in Europe.

With Dr Diana Yeh talking about some of the forgotten pioneering Black and Asian stars of the stage in the early 20th century, and Charles Shaar Murray.

As a famed singer and actor persecuted for his radical politics and civil-rights campaigning, Paul Robeson has the dimensions of an American tragic hero. ... Tayo Aluko does a fine job in evoking his dynamic presence and in reminding us of the inhospitable attitude to dissent in the land of the free. Michael Billington, Guardian