Chinese Britons could swing the general election vote in some constituencies 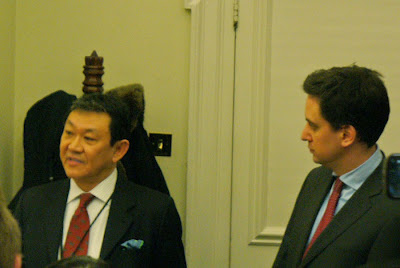 As the British local and European elections heave into view, watched closely for how likely the 2015 general election is to yield victory for feudal baron David Cameron or milquetoast Ed Miliband, here's my South China Morning Post column from last year in which the Chair of Chinese for Labour Sonny Leong explains why non-white voters may hold the balance of power in some constituencies.

Does this mean the end of racial discrimination against BAME Brits ? Or could it also partly explain why the white male establishment is hell-bent on protecting its last gobby bastion of crude race dominance, Jeremy Clarkson and the Top Gear team at the BBC?

With the numbers of ethnic-minority voters exceeding the electoral majorities of sitting members of parliament in 168 constituencies, it is being suggested that minorities hold the key to the outcome of Britain's next general election, in 2015. Britain's ethnic-Chinese population, meanwhile, has reached almost half a million, and Chinese voters exceed in number the MP's majority in 36 seats. Political parties may well decide it is time to attend more to their interests.

In an era of no outright winners and coalition fudges, those 36 seats might mean the difference between power and limping along in opposition for five long years. Sitting MPs, fearful for their survival, now have to target communities within communities. There could be some interesting horse-trading with Chinese constituents.

Sonny Leong, chair of the Labour Party's Chinese for Labour, says, "The Chinese have reached a certain size where they can be power brokers. The ethnic minority is an important group that no political party can ignore."

Leong alludes to a certain complacency that has existed until now. Labour was long able to take ethnic votes for granted, but politics have become less tribal and voters no longer adhere blindly to family tradition when choosing which party to put their cross next to. Just because Grandpa voted for a party all of his life doesn't mean his independent-minded grandchildren will back the same one.

More than ever, issues and policies determine who gets votes and, for Chinese, educational opportunities and immigration issues tend to be priorities. Every Chinese here is likely to know of someone affected by immigration clampdowns. For Labour that could be good news, electorally; for the parties who form the current coalition government - the Conservatives and Liberal Democrats - recent accusatory, anti-immigration ad campaigns do not bode well for gaining Chinese votes, especially as the MPs of both are still overwhelmingly white.

Unlike in other Western democracies, in Britain Chinese have practically no parliamentary representation, other than one member of the House of Lords, the baby-faced Baron Wei of Shoreditch, of whom few had heard before Prime Minister David Cameron made him policy "tsar" for his Big Society initiative in 2010.

Hello Anna, just been reading this post, couple of points I want to make.
First I find it strange that members of the Chinese community, or indeed any community would vote as a block for a party. I think that smacks of racism myself. The Chinese community has alsorts, business owners, professionals, public sector workers and the unemployed. How can one party represent such diversity?
In any case the Labour party is that last party any British Chinese would vote for after the hell of the Brown/Blair years.

Just my two cents worth.