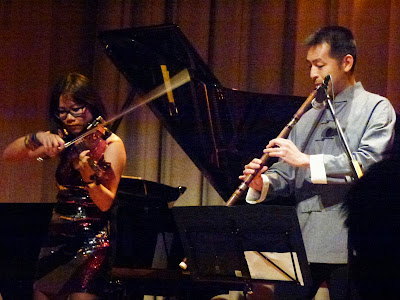 Last night's Dislocating Asia event at The Forge in Camden was more than a whole heap of fun: it was significant in showcasing a variety of top East Asian talent without a hint of faux orientalism.

We were the cool kids (okay, we were the rebels smoking fags behind the bike sheds and sassing the dweebs from the back seats in the class), and all references to our East Asian heritage flowed from an organic part of who we are and our interests, without a panda or pander in sight — unless you count my poem, "Chi Chi's Glorious Swansong" (about the great panda star of London Zoo in the 1960s). It was one of the first events of its kind that I can recall where you didn't cringe with embarrassment at the insecurities of the third largest non-white ethnic minority on display: it was another marker in the British East Asian community at long last, finally growing up.

Dr Diana Yeh curated the evening around the publication of her book, The Happy Hsiungs: Performing China and the Struggle for Modernity. 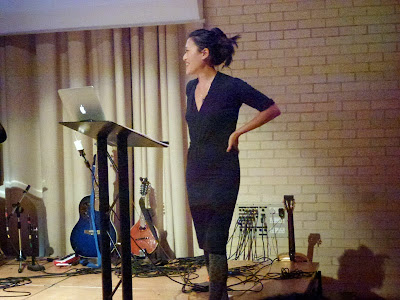 Diana was first up with an illustrated talk about the Hsiungs that flew by. Extracts from the play, enacted by Jennifer Lim, Daniel York, Melody Brown and Amanda Maud, revealed a witty comedy of manners and a case of mistaken identity: most apt for a minority constantly being denied theirs. This was underlined by photographs of the original cast — all white actors in yellow face. Oh, how we laughed. 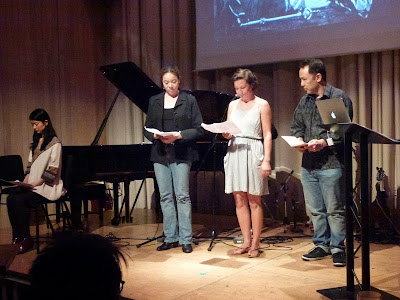 Shih-I Hsiung, now almost forgotten but about to be resurrected, was a barnstorming playwright whose hit West End play, Lady Precious Stream, made him and Mrs Hsiung (the first Chinese woman writer to publish a book in English) the toast of the town. George Bernard Shaw considered him to be the Chinese Shakespeare but advised him that Chinese-themed work would assure him of success. His great hit show, based on a Chinese classic, played the West End for 733 nights from 27th November 1934, going on to be performed internationally from Israel to Kenya, and was adapted for television in 1950.

He has been rediscovered in China, where diaspora pioneers such as Hsiung and Anna May Wong are seen as important cultural icons in the history of the new superpower.

Hsiung's son, the elderly masterchef Deh-ta Hsiung, attended with his wife Julia. The Forge is a great new venue with wonderful acoustics, like a mini-version of the Royal Festival Hall. Its 60-seat capacity was rammed for the show.


Melody, Amanda and Daniel took the stage in their other guise of the night: the three-piece acoustic band, Wondermare. Melody and Amanda's warm, delicately-nuanced harmonies convey a range of emotions from the menace of David Byrne's Psycho Killer to the gentle comedy of My Lovely Horse from Father Ted. Daniel departed from his mandolin to serve up a stonking slide guitar solo in Ode to Billie Joe. They called on Liz Chi Yen Liew and Charles Shaar Murray to accompany them for their final song, a stirring commemoration of the Morecambe Bay cockle-pickers who died ten years ago this month.

I did a thirty-minute poetry set, reading from my book, Reaching for my Gnu, and performed a few new ones including Margaret Thatcher Died At the Ritz and Eating Placenta: Lines on the Royal Birth, before Charles Shaar Murray joined me for Anna May Wong Must Die.

Composer Liz Chi Yen Liew, who has worked with a host of big names in music including Moby, proves a fierce violinist and pianist, sensitively complemented by Dennis Lee on flute and zither. Lee's delicacy on the zither means every plucked note resonates with depth that reaches right into your belly. My friend Paul Anderson was literally moved to tears and snuffled away quietly into his beer. It was his birthday so he was most likely contemplating the passage of time and similar existential matters — it was that sort of a night. Liz and Dennis brought the show to a rousing end, leaving DJ Zoe Baxter, whose Lucky Cat series resumes shortly on Resonance 104.4FM, to spin her hidden wonders of early East Asian recording — always a fascinating listen.

We all had such a great time that we're hoping to repeat it. Who knows? There may even be a Wondermarey Christmas on the way. 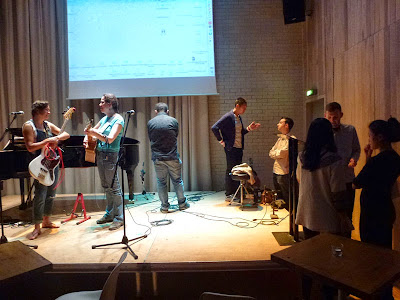