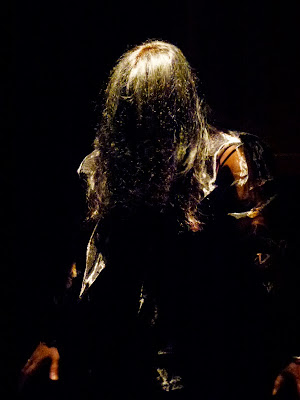 This morning's hypnagogic state was interrupted by a call from Pat Edlin, who excitedly told me about a book by Chris Grayling about yellow peril fears and orientalism that he'd just heard discussed on the Today programme (BBC Radio 4).

I did wonder why a dodgy Tory minister would suddenly break the habit of a political lifetime and stick up for underdogs instead of sticking it to them. The thought of kindness and rationality emanating from John Humphrys and the laughably titled Justice Minister blew my noggin enough to have me reaching for Wiki.

Ah, Pat meant the other one. How unfortunate for academic Chris Frayling to so nearly share a name with the Slippery One: only one letter away on the keyboard for anyone with fat fingers.

I met Chris — the nice Chris — on BBC Radio 3's Night Waves in 2011 when I was talking about Anna May Wong and the dire representation of Chinese and east Asians in general in the media. I'm delighted to see him take on this subject and hopefully give it the Edward Said Orientalism treatment.

Here's a round-up of yellow peril episodes both historical and current that we've had to deal with.

From Anna May Wong having to die every time a white bloke fancied her, Sherlock's Blind Banker episode and propagandist hack Sax Rohmer's villainous Fu Manchu to the government blaming Chinese Brits for for its own failure to contain the Foot and Mouth Disease outbreak in 2001, we've encountered a slew of challenges, and even won a few of 'em.

I'm looking forward to reading Chris Frayling's new book, The Yellow Peril: Dr Fu Manchu and the Rise of Chinaphobia (Thames and Hudson), presumably covering similar ground as Philip Dodds' sympathetic Radio 4 programme, Overwhelming China, that Daniel York, my fellow Fu Fighter, and I were on a while back.

Let's hope we're hitting a critical mass and that all this yellow peril nonsense will come to a swift end.

And then the BBC sacked Jeremy Clarkson, and then I woke up.

One reason Chinese Brits do not feature in mainstream UK culture is, if we are humanised and shown to possess a complex inner world, how can we continue to provide a permanent reservoir of scapegoats?