Doctor Who review season finale: Death In Heaven and an ideological battleground 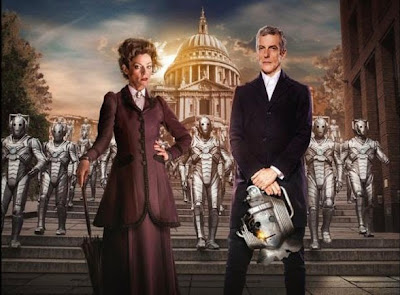 Doctor Who: Death in Heaven season finale — an ideological battleground.

Cybermen meet zombies in the second half of this A Matter of Life and Death nick in which our intrepid heroes hissy-fit around a lot.

There's so much that could have worked beautifully in this series. How can you have those great production values and Peter Capaldi on board and still make such a hash of it?

The problem, as always, is the script. The writers' caprice runs through the Doctor Who reboot like Nick Clegg's election promises. It's all Patrick Duffy in the Dallas shower, a dream, a mish-mash of half-remembered images and tropes, mis-threaded backstory lurches (a sudden retro-fit and Gallifrey exists, the Doctor's nemesis conveniently telling him where). Characters don't so much arc as teleport to whichever position the writers decide suits the script du jour.

Dream logic seems to have been employed to suit the writers rather than designed to delight the audience the way a modern Maya Deren or Bunuel (from whom the writers appear at times to be borrowing) might do while burrowing into the collective unconscious, taking the audience on a ride rather than taking us for a ride.

Russell T Davies' heavy reliance on undermotivated melodrama and shouty frenetics is still, after all this time, shrilling away like a dentist's drill. Clara is SO deeply in love and yet she wastes an irritating plot-blocking age verifying, like software gone wrong, that it really is Danny who's speaking to her from the afterlife. Everyone's so cross all the time, operating within their own little thunderous clouds of fury. Like late-night coke-fiends running out of Charlie, you half expect them to sniff and wipe their noses before running off in the Tardis to score more.

The script dusts the cobwebs off old favourites — "Why are you doing this?" "I need you to know we're not so different" from a squillion denouments where, quelle surprise, the protagonist and antagonist are inwardly the same. Aw, and love conquers all, unless you're the season's Big Bad.

This may be Borg territory (poking that hoary old question: what makes us human?) but collective action is trumped by the one single Cyberman — Danny Pink — who loves more than anyone in the entire history of the human race, more than any of the dead who make up the army of Cybermen because some people are more SPESHUL. (If Danny is capable of redemption, then why none of the other Cybermen? If the Brigadier retains a vestige of humanity, then why can't the entire Cyberman race be redeemed and escape genocide?) It aims for the sublime moments in Buffy where the Slayer has to kill Angel gone bad, or finally gets to kiss Spike, but misses, barely achieving bathos. There's no underpinning of the emotions at a deeper level. For a series about a Time Lord, they do get the emotional timing spectacularly wrong.

Once again, the military and authority are fetishised and ideological markers slipped in under the bells and whistles. Danny's a former soldier who meant well but accidentally killed a boy when he was serving in the Middle East. He is the idealised self-sacrificing soldier who never gets to question what it was he killed for. In this narrative, it's not the politics or the premise for the war that's wrong — it's the fault of individual soldiers like Danny, whose conscience pays the price.

Lethbridge-Stewart falls from the Presidential flight and survives because, as it handily turns out at the end, another good Cyberman caught her, her Brigadier father. If favourite characters can be saved from death as easily as this, then nothing is at stake and any anxiety invested in the outcome is thereby diminished. A huge pic of her father dominating the President's plane provides another "hunh?" moment. A humble brigadier? Really? It would take a whole Clifton Suspension Bridge of disbelief to buy that. Not only another sloppy moment of disrespect for the audience, but also an unpleasant reinforcement of the principle of dynastic succession, hardwiring young viewers with ruling-class values of social and political hierarchy.

Hysteria is sloshed on— papering over the narrative canyons instead of generating authentic emotion and catharsis — and the resulting ambience is simply over-mannered and harsh, trite and sentimental.

Superficially inclusive, the narrative brings non-whites and LGBTs under the umbrella of existing power structures – on condition that they don't actually challenge those structures. Even the cheeky black schoolgirl is another version of the perky, privileged white Clara. Prepare to be assimilated!

The BBC has calibrated its culture to the norms of business and the military, with more armed forces personnel featuring as protagonists in its drama and documentaries over the past few years than I can remember, while the space to challenge the mainstream political narrative has shrunk to almost nothing. Imposing a reading of the world at odds with people's experience, BBC output not only leaves capitalism and the status quo unquestioned, it's actually reinforced. All those celebrity chefs, big swinging business dicks and talent judges constantly putting you in your place in the New Order, clipping your wings, accustoming you to taking orders. They're even enlisting Santa, as dreamt up by the Coca-Cola corporation, for the Christmas special. They'd better subvert this one!

Doctor Who was always a bastion of establishment values when it was created just as the Sixties began to swing, but there was something innocent about it, and you could filter out the stories from the residual politics. However, our beloved creation now sneakily puts a new generation back in the box marked pleb. Respect hierarchy, genuflect before authority, fall in with militarism under the delusion that you have value as an individual. Forget the proud heritage of the post-war era where the mass of the population enjoyed an unprecedented confidence born of an increasingly (if far from perfect) egalitarian society. Science fiction fans of the world unite - you have nothing to lose but your gains.

Well done, Ms. Chen! Have been enjoying the current season of DW but have been wondering at some bits that appeared a twinkle 'off' (and I regret to say I have watched the series since just before the departure of Will Hartnell). You may have put your fist on it! Will have to go back and watch the season again, but... yeah. Could just be. Thanks for the post.

Just to warn you that your Doctor Who post is getting slagged off on Reddit right now:

It's almost as if they just want to shout your argument down without engaging with it. Just fancy that!

Then again, that's the Nu Who faithful for you; every episode is the best ever and it's heresy to say otherwise. In many ways Doctor Who is a far more conservative program than it used to be, and this shows up both in the show and the fandom.

Thanks, The Slug. Let a hundred flowers bloom and may intelligent debate thrive.

Cheers, Nastyoff. William Hartnell and John Pertwee looked like the archetypal Doctors to me. Capaldi should have been awesome.

Well, Capaldi may yet be awesome. I often feel bad that Christopher Eccleston was only the Doc for one season; he had a sort of working class attitude that I thought Russell Davies could have done something interesting with, given time. Capaldi, thanks to his marvelous Scottish burr, may be better utilized in Season 35, per, 9. Also a bit sorry to hear from Mr. Slug that your post is getting dissed on Reddit. Come over here and make your views known, I'd say. Are you expected to go over there? Thanks for the reply, by the way.