Britain's "liberal" media and UK Chinese: from London Chinatown to the general election 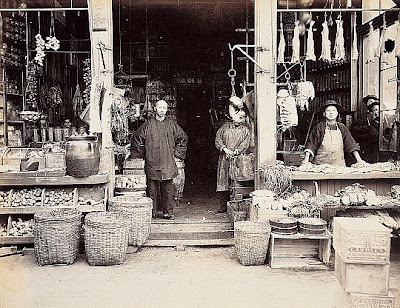 The Guardian has always been sloppy about China matters, but its publishing stable now appears to have given up any pretence of writing about UK Chinese issues informatively.

"It was a genuine community built by the emigrants from Hong Kong who, having been bombed out of Limehouse in the East End in the 1940s, made this patch of London, with its cheap commercial rents, their own," writes Daniel Boffey in the Observer about Soho's Chinatown

Er ... I don't think so. I know we all look the same to the "liberal" media but it was Cantonese and Shanghainese sailors and their families living mainly in the two streets of Pennyfields and Limehouse Causeway, not Hong Kong migrants, who were bombed out during the war: a large number were rehoused in Poplar.

My father was an early Chinese occupant in Soho's Chinatown from 1947 when it was mostly Indian and Jewish. It wasn't until the 1950s — but really the '60s — that waves of Hong Kong migrants got the takeaway industry going after the domestic washing machine rendered laundries largely obsolete. They bought up the fish 'n' chip shops that were going under and started serving their own food.

You wouldn't find many HKers in that early Soho mix. A few Kuomintang diplomats finding new ways to make a living and former Cantonese and Shanghai sailors, but hardly anyone from HK.

In the ten-part series Chinese in Britain, which I presented on BBC Radio 4 in 2007 (repeated last year), we looked at the history of UK Chinatowns including Limehouse and Soho, but the pattern of not allowing ethnic minorities to tell their own story persists in some organs which continue to get it wrong.

At best, invisibility is thrust on us; at worst, the Chinese are still defined as villains. From the yellow-peril Fu Manchu books by Sax Rohmer to the BBC's Sherlock reboot, where even innocent Chinese passers by in Soho Chinatown were portrayed as sinister and "other", the Chinese are dehumanised and excluded. Yet none of the liberal media paused for breath between BAFTAs and plaudits to question why, well into the 21st century, the publicly-funded British Broadcasting Corporation was breathing life back into what should be moribund racist tropes.

In Channel 4's recent  debate concerning the role of the ethnic vote in the imminent general election, chaired by Krishnan Guru-Murthy, only one single solitary east Asian face could be seen in the audience — placed on the corner in the seat nearest to Krishnan where he stood more chance of being picked up by the cameras, presumably after someone panicked on the night at the oversight. None on the platform. Yet Chinese are Britain's third largest Black and Asian minority ethnic minorities (BAME) after South Asians and African Caribbeans.

In a piece for the South China Morning Post magazine last October, I outlined how the ethnic vote could swing results in the marginal seats, with the Chinese key to the outcome in 36 seats including Barnet in May. Still, here are the Chinese being excluded yet again.

So when the Chinese are next accused of being the authors of their own exclusion ... think on.

My article on the Ming Ai Chinese in Britain project for the South China Morning Post magazine.