Chris Rock throws Jada, Will and the three Asian kids under the Oscars bus 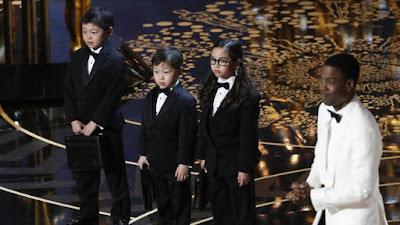 Well, Chris Rock REALLY wanted that gig, didn't he? With the eyes of the world on this year's Academy Awards ceremony following the 'Oscars So White' campaign and boycott, how's a chap to hold onto his integrity and reputation and still get to play the big time?

With a shocking number of African American deaths at the hands of cops, the Ferguson protests and the Black Lives Matter campaign coming to a head, the issues of black worth in US society were highlighted by the casual exclusion of a major section of the population from one of America's top cultural prize-giving ceremonies. This was the crisis moment that had so much riding on it. Would Chris join the boycott even if it meant giving up his role as MC for one of the most prestigious events in the showbiz calendar?

What Chris did was to take the job, aim a few soft balls at the white establishment and then show them he was only kidding. For is he not the house clown? He made his bones by reserving his keenest viciousness for Will and Jada Pinkett Smith, the very couple who raised awareness of the total absence of any nominations for black actors at this year's Oscars. The most effective assassins are always the ones from the doomed victims' own group, as it comes with an extra serving of relish. He did what no white person could have achieved: shooting the messengers from the lip. Greater love hath no man than he lay down his fellow black performers for his place at the top table. How the white audience laughed.

It was gruesome to watch, like some sort of a human sacrifice of Jada and Will. And then, in case they missed the point he was making, he tossed in three Asian children as dessert for whichever lower order daemon it was that he was ingratiating himself with on the night.

I remember when Chris Rock was good. We liked him a lot in our house. The missing link between Richard Pryor and Eddie Murphy, Chris combined savvy sharp wits with righteous indignation over injustice. His documentary, Bad Hair, made me quite tearful thinking about his daughter coming to terms with her own black beauty and the rancid creatures for whom her black African hair is a mark of inferiority.

I wonder if Chris saw his child in the eyes of the three Asian kids he humiliated on stage at the Oscars. Oh look: Price Waterhouse Cooper clones because, as any fule know, we Asians are all corporate breadhead whores without an ounce of concern for our fellow humans. One of the kids was given a Jewish name, thereby gifting Chris with two racist insults for the price of one.

Then there's Sacha Baron Cohen at the Oscars, another swinging dick hiding his uber-dickness behind insults about Asian guys and small dicks. So brave. "Do it to Julia," screamed Winston Smith in George Orwell's 1984, and here they are as broken and willing to pass the pain on to others in order to escape it themselves.

Anyhow, here I am in last night's World Have Your Say debate on the BBC World Service on the subject of the Chris Rock Asian Joke.

How the Asian kids were tricked into Chris Rock's Asian joke. One of the kids speaks out.

How Asian model minority stereotypes are used against black people.

In 2021, Black businesses in the US have struggled under Covid-19. Support Black-Owned Businesses: 181 Places to Start Online