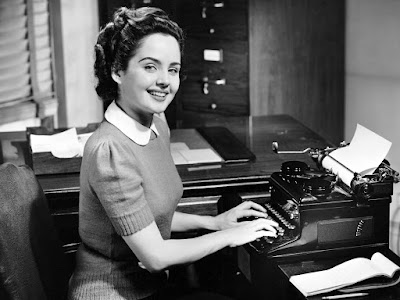 So you wanna be a writer?

Women born in the 1950s have been truly gang-banged by George Osborne and his Tory cohort. While the rich saw their income triple since the 2008 crash, women who earn only 80 per cent of their male counterparts, who have had their pension age leap from age 60 to 66 and beyond, now find their lower cost Class 2 National Insurance Contributions (NICs) abolished with the cost jumping five-fold from £2.80 per week to £14.10 in Class 3 if your earnings are below £8K. This means an annual bill soaring from £147 to £733 if you wish to continue making voluntary payments to qualify for the state pension — 35 years of NICs.

So not only have they moved the goalposts and added 6 years, we can't afford to pay for them. And if we don't pay for them, we get an even lower pension than expected.

According to the government paper on abolition of Class 2 NICs (consultation closed):


In order to qualify for Class 4 NICs you have to be self-employed and must additionally pay Class 4 contributions once your profits reach a certain limit. 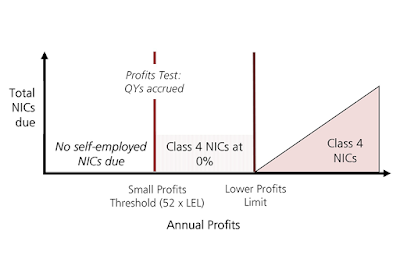 So what happens if your income falls below this threshold?

Those with profits between the SPT and Lower Profits Limit (LPL) (£8,060 in 2015/16) would no longer pay any NICs but still build entitlement to contributory benefits.

State Pension entitlement
Following these reforms, those with profits below the SPT [Small Profits Threshold — currently £5824] would need to make use of the existing provisions in the NICs system that serve to protect an individual’s State Pension record, in the same way as for employees who do not gain entitlement through Class 1 NICs. These are NI credits and Class 3 voluntary contributions.
While the Government recognises that the rate of Class 3 contributions is higher than Class 2 contributions, those for whom Class 3 may be prohibitively expensive may be eligible to claim means-tested benefits, which would protect their State Pension record via NI credits. [My italics]

Remember, this is not voluntary in the true sense. Fail to pay for those qualifying years and your state pension will feel it.

... those whose profits are below the SPT in only a small number of years may not need to pay Class 3 NICs to fill gaps. It is those with successive years of low profits who may see their State Pension entitlement affected if they did not pay Class 3 NICs. [My italics]

Read section 2 very carefully. Low cost Class 2 NICs has been abolished so you will have to pay the higher rate of Class 3 after 2018 if you do not qualify for Class 4 contributions with an income over around £8K.

Women born in the 1950s — who have not been given a reasonable time to make the transition — will lose around £36K in having to wait the extra six years for their pension. But that's not enough for the Tories and their "hard working people" mantra. We now have to pay thousands more in order to pay for those years to get as near to 35 years of contributions as possible.

Labour should be all over this like a rash. You may have the angels on your side but, as I learnt in the field, it's in the first moments of an issue breaking that the dominant narrative is formed. If you can't grasp that, stop being a dog in the manger and get someone on board who does. For all our sakes.


The disingenuousness of the rhetoric on the personal allowance continues. The chancellor boasted yesterday that the increase in it “means another 1.3 million of the lowest paid workers taken out of tax altogether”. No it does not mean that. Taken out of income tax, yes. But not taken out of direct taxes on income. It remains the case that National Insurance Contributions, which are just another tax on earnings, start to be paid once earnings rise above about £8,000.

@MadamMiaow @AnnPettifor You'd think there was a conspiracy. And you may well be right
— Richard Murphy (@RichardJMurphy) March 21, 2016


"... faced with what they thought in 2005 was approaching Armageddon, the Sir Humphrey clan DOUBLED the pension payout for the 600,000 top civil servants. The measure bypassed the Public Accounts Committee, which means that legally the pension awards were embezzled from the taxpayer. And the bypassing of the PAC means it was done with the complicity of elected Ministers. Consider the size of this heist: unfunded Civil Service pension liabilities today stand at £1.4trillion. 50% of the National Debt is down to the greed of 600,000 Sir Humphreys. Indirectly as a result of this, around 325,000 Waspi women have been left destitute."

How the establishment is stealing everything that isn't nailed down. Via @therealslog

Another Budget scandal exclusive from John Ward at The Slog. Why Big Corporate lobbying made Osborne more tearful than 500,000 WASPIs on the breadline


"Look at some of the other ‘priorities’ Osbollocks put ahead of pensioner destitution:
Freeze on fuel duty – £435m
Relief for oil companies – £265m
Freeze on alcohol duty – £85m
New rights to buy – £35m
Tax cuts to personal allowance & higher rates – £2bn
ISA savings allowance – £170m
Not investigating senior mgmnt tax fiddles on loans – £260m
Reduced corporation tax – £1.1bn (2020) ... the Government lie about 'having to wait a further 18 months for a State pension' is in fact SIX YEARS for women born in 1955 or later. That should be cut to one year from 60th birthday with immediate effect. For the 150,000 WASPIs involved in that, there is a 50% duplication with more women who have no partner, private pension or other means of support. That group should now get their pension immediately, backdated to 60th birthday. The remaining 175,000 WASPIs not in either group should have their delay halved, as a penalty levied on the Treasury for ignoring the Turner Commission. This would mean that all those who were, say, 60 in 2011 will get their pensions immediately, backdated to 2013."

The Guardian piles in a year after the event (18th March 2017) with New bombshell for self-employed. Still, better very late than never.

And not even important enough for this cynical move to be picked up by either press or politicians.

You're right - Labour should be all over this like a rash. Red with anger. Osborne and the others are vindictive politicians, contemptuous and dismissive of people they grew up looking down on - the lower orders. Misogynist cultures are evident in all social classes but the combination of misogyny and political fear of the masses is a particular nasty cocktail.
Regards,
Rob Donovan

It's quite shocking how the Tories are cutting a swathe through the most vulnerable in British society and there seems to be no effective force to oppose them. JC needs to up his game exponentially.