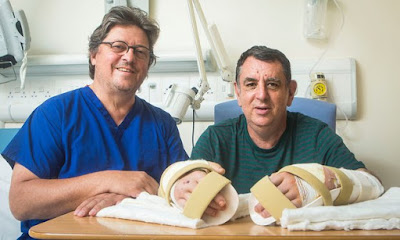 The world's first succesful hand transplant was carried out in China when microsurgery was being pioneered in the 1960s. My dad came back from a China visit with a fascinating set of black and white photos (wonderfully gruesome for a kid to pore over) of a male worker who'd lost his hand above the wrist in a factory accident. The first photo was him sitting calmly with his arm resting on a table with the severed hand placed inches away from the stump. Over the course of photographs you saw the various stages of attachment, exercise and training. The final one was taken months later of a smiling patient with his new working hand and the happy medical team that carried out this remarkable operation.

When I was old enough to talk about this, I was angrily told by jingoistic white geezers that this was an impossibility. "How could you sew all those nerves and blood vessels together?"

If you thought we were living in more enlightened times, here's the cuddly, liberal Guardian all these years later claiming this breakthrough for European white civilisation.

A thing doesn't exist unless white Europeans invented it. Like hydraulics, the multi-tube seed-drill (2ndC BC), printing, the crank handle, suspension bridge, stirrup, masts and sailing, gunpowder (850AD) and the humble cup of tea. [See Joseph Needham and Robert Temple.]

Shouldn't we be talking about the achievements of human endeavour and give credit where it's due? Isn't it time to jettison this soft white supremacy?

It's an attitude that's inscribed deeply in our culture, perpetuated by white liberals who really should do better research. The late black historian and writer Alan Mitchell was adamant that it needed challenging as it's been going on at least since the ancient Greeks appropriated Egyptian knowhow as their own discovery.

And it still goes on from the macro to the micro. F'rinstance, I've been told by leftists of all people, such as writer Ian Sinclair (The March That Shook Britain), that I couldn't possibly have done the pioneering presswork for the left that I did. Lucky I kept all my press releases, photos and notes, eh, Ian? Eh, Seumas?
Posted by Madam Miaow at 7/23/2016 11:26:00 am