Brexit: a depreciating currency and the mirage of a thriving economy 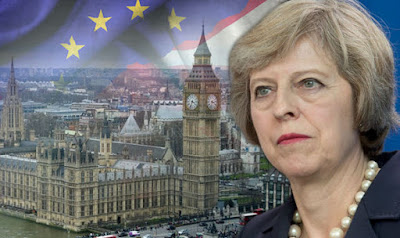 The Reluctant Capitalist: a depreciating currency and the mirage of a thriving FTSE (or: how we are so screwed).

Keeping the Left up to speed.

The pro-Brexit camp is lulling us into complacency over the results of the EU referendum where only 37 per cent of the electorate voted Leave, along with a summer bounce in retail sales and the FTSE breaking through the 7000 mark.

Let's take a closer look as those markets.

The FT, not known for dissembling to its moneyed-class readers on economic matters, unlike certain Brexit-cheerleading newspapers, says:


The pattern of the UK’s performance looks wholly different when viewed in dollar terms; the FTSE 100 is down slightly for the year in dollars, and lags behind FTSE’s index for the rest of the world by seven percentage points. Substantially all of that gap has opened up since the Brexit referendum in June, which initially caused stocks to fall globally. Stocks in the US made a full recovery; stocks in the UK did not, unless you measure them in the UK’s depreciated currency.
... 1998, the FTSE 100 has underperformed the rest of the world by 50 per cent in dollar terms ...
... UK stocks have lagged behind the world badly since the referendum, in common currency terms, and that the pound has dropped to a fresh 31-year low since UK politicians started saying over the weekend that they were prepared to suffer a “hard Brexit” in return for regaining control of migration, show that international markets perceive Brexit as risky, and potentially harmful for the UK economy.

Apart from being a huge bubble trading at 69 times earnings, only seen at the height of the tech bubble and 2009 crash aftermath,


... the gains have been concentrated in the materials and mining groups that populate the London market. Anglo-American has trebled this year, while Fresnillo and Glencore have more than doubled; all are rallying from a severely sold-off position, and rely on a continued recovery in commodity prices.

And don't forget that Bank of England chief Mark Carney had to pump another £60 billion pounds into the economy by buying up gilts (government debt) after the EU vote, extending the existing quantitative easing (QE) programme to £435bn, keeping the stock markets artificially inflated.

And yet Money Week points out that:


In the three months to the end of July 2016 – so roughly a month and a half either side of the Brexit vote – it showed that the UK’s broad money supply grew at 14.7%. ... this rate exceeds even the previous high of 12.8%, set in 2006 at the peak of the boom before the global financial crisis. We all know what happened next.

... only about 10% of newly-created money has made its way into the kind of consumer items tracked by CPI. Instead, 37% has gone into financial markets, 40% into residential and commercial property, and 13% into real businesses that create jobs and boost economic growth. ... So all the official measures do, effectively, is track the 10% of “inflation” that has gone into consumer goods.

The pound has fallen more than 14 per cent this year, only beaten by the Argentine peso as the worst performing major currency for 2016.

But what does this mean for the many working class voters who want Brexit?

When you have few assets and are living essentially hand to mouth much of this goes over your head. I was blissfully untouched by ERM, the dot com bubble and the 2008 crash, only vaguely aware that some awful calamity was going on in the upper echelons. This is likely to be how many poorer Brexiteers — done over or neglected by successive governments, left largely undefended by either of the parties when austerity was running full tilt — feel about the current economic hit, especially if the Tories can keep some plates spinning. Problem this time, though, is what's coming down the pipeline: more "soft" austerity, collapsing pensions hit by ultra-low interest rates, cuts in services and a privatised NHS will all hurt.

While domestic goods made here will be more expensive due to cost of imported materials, so will imports, so UK manufacturing may gain the upper hand in time, and rising UK earnings may also help soften the blow.

However ... value for investors isn't present even with a fallen pound. One study found only four of the giant stocks had any value left (including dealer of death BAE, of course!). Investors may flee or just sit tight and watch for now.

So we have the worst of both worlds. A severely damaged economy where those at the bottom are picking up the bill, no revolutionary movement to change society and a degenerated left waiting on the wings for capitalism to deliver the working class into their hands. It won't, at least this time around. That's the genius of capitalism — it mutates and leaves us in its dust.

Such great material to work with. UK productivity gap widens to worst level since records began.

Tories under pressure to go for investment: Labour's opportunity to drive the economic narrative

Theresa May bragged about Britain being world’s 5th-largest economy. After her speech, it dropped to 6th.

Banking revenues about to fall off cliff as UK signals slashing regulations. Remember Reagan doing the same and Clinton abolishing the Glass Steagal Act separating investment and savings banks? And the 2008 crash that those policies led to?
Posted by Madam Miaow at 10/06/2016 12:47:00 pm