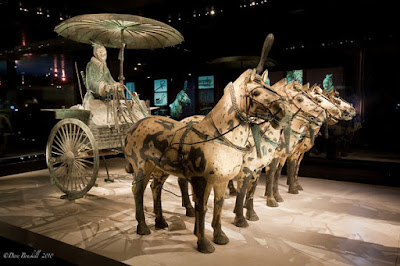 The world is changing, the sun sets on the British empire and all that is solid melts like a Mr Whippy ice-cream in the summer heat.

Some people can't stand it. In terms of cultural appropriation, Dan Snow's claim in his programme, The Greatest Tomb On Earth: Secrets Of Ancient China, that the Terracotta Warriors (made some two centuries before the Common Era), were Greek-led innovations takes the chauvinist biscuit.

Snow dons his best Victorian colonialist demeanor to assure BBC viewers that, joy of joys, it was us who did it after all. All is right with the world.

According to the BBC puff, "Mobilising the latest technology, delving into some of the oldest texts, enlisting world experts and employing forensic science, together the three reveal an explosive secret from the foundations of the Chinese empire".

That "explosive secret" is the leap from simplistic human representation in art to the full-on 3D life-size figures discovered in the tomb of the First Emperor, Qin Shi Huangdi (259-210BC). For which Snow credits the west on not very much evidence.

As if, as in every culture, the Chinese weren't already on the road to increasingly "accurate" representations of the human figure. European art underwent its own revolutionary leap in human depiction in the middle-ages, more than a thousand years later: from stiff, unreal figures (similar to early Greek sculptures) where man was peripheral to God, to man placed at the centre of the universe as a spiritual being, giving rise to perspective and an attempt to inject life into the art. But even that is not as a big a leap as Snow taking credit on behalf of the West. History isn't — or shouldn't be – a competition. (Yes, that goes for Chinese chauvinism as well.)

Qin Shi Huangdi unified China, often brutally, and standardised weights, measures and language. It was a period of massive change giving rise to a super-state that could draw on all its resources.

Of course, cross-fertilisation happens. Hey, the West got China's silk, porcelain, tea technology, gunpowder and hydraulics and a whole lot more. The Jesuits may have introduced the water screw to China but the Chinese soon replaced it by vastly more efficient piston-pumps.

But, let's say Greek statues found their way into China. If it was such a massive influence, then surely there would be copies of the Greek style cropping up elsewhere? That distinctive fluid, muscular style: where is it in ancient Chinese art?

The whole weight of the programme rests on the assertion that the terracotta warriors would not have been possible without the Greeks teaching the Chinese how to do it, even though the Chinese were technologically more advanced.

During Qin Shi's reign there occurred a paradigm shift in figurative representation in the plastic arts, a vast improvement on how the Chinese had hitherto comprehended the world. Given that China had the ceramics technology, how long would it have been for them to size up? The puppyish Dr Albert Lim (not a threat to Dan Snow's officer-class authority) happily bounds alongside providing ethnic and scientific cover with lots of excited gasps but he never challenges the narrative swerve being constructed out of the flimsiest evidence.


The evidence was not conclusive, and they acknowledged that in the documentary. The skull that was found in Xi'an, whilst not of Chinese origin, was not of European origin. And the DNA test which showed genes of European origin, was done on DNA located in Xinjiang province, which is nearly 3,000km away from Xi'an - I myself am not surprised by this particular result.


Why don't we ever see what the Greeks learnt from Egypt? Two years ago, I proposed to the BBC history department for their 2017 Hong Kong handover anniversary season that, among other subjects, we make a programme about Joseph Needham's scholarship around China's innovations that have affected the west. I suspect mine was a perspective they'd rather not deal with.

The BBC should be making programmes about the richness of human diversity and celebrating how we are all interconnected, not blowing up some jingoistic arts and tech turf war. Dinosaurs from a fading empire comfort themselves that Chinese are mere copyists and Mighty Whitey the true innovators, but from what I've seen, the reverse is true.

Sadly, I suppose we can expect more of this twisted history now that the sun is setting on the empire. 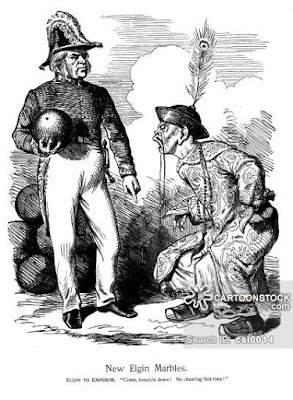