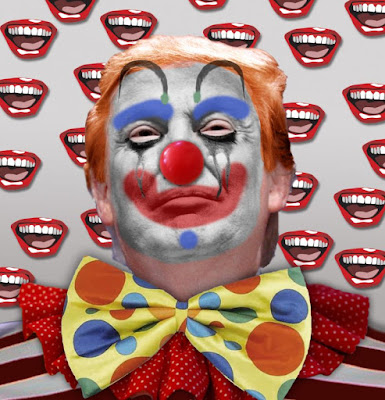 With only one day to go before the US votes for its next president, one question remains: who is the least worst?


Think about this. Trump, Putin and now, it appears, China, are contemplating a period summed up in the famous term of the early 20th Century economist Joseph Schumpeter as ‘creative destruction’.

Tom Phillips writing in the Guardian:


... “It was Mao Zedong who said: ‘Without destruction there can be no construction’. And, if I interpret him correctly, Donald Trump is the suicide bomber of American politics,” said Orville Schell, the head of the Centre on US-China Relations at New York’s Asia Society.

... Trump’s statements questioning US support for its Nato allies and defence treaty with Japan meant he would be “an absolute gift” to Beijing as it strove for superpower status.


Recession is coming to the UK thanks to inflation of at least 4 per cent headed our way. (Mark Carney is staying on at the BOE until 2019 'cause he knows the chickens will be coming home to roost by 2018.) Employers won't match inflation, wages will freeze or effectively fall, our spending will drop and companies will go bust. And there's that great big global debt bubble that has to eventually go "pop" ...

But for capitalists who can hang on through the slump, there are fortunes to be made as Britain then "recovers" and stocks bought at fire sale prices rise. Same for the US where markets are at the end of a bull run that has been fuelled by easy money injected into the system by the central banks. Only the fittest survive in Trumpworld, everyone else is going to find it very hard.

War and slumps reset the bankrupt old system and I have to admit I'd rather take my chances in a slump than in a war, especially with Russian nuclear bombs that can take out an area the size of Texas and trigger-happy Amurkins missing their targets.

Even if Clinton wins, the chances of military conflict are high(er) and the inevitable correction in the markets will happen but it might take longer to get to the end of this round of pass the parcel with a live grenade.

'Fonly we had a strong, humane, effective, intelligent left to lead us through this.

In the meantime, everyone with an outside area should have a water butt and learn to grow food. And organise locally. If we all pull together on the basis of need not greed we can raise our collective consciousness in the struggle as well as survive.

And take comfort that those of us who possessed little in the last slump in the 1970s barely noticed it except for bin bags piled high in the streets and corpses left unburied. At least we got punk out of it. Expect Zombie Punks versus Scary Clowns in the next phase of the science fiction writer's coma dream where we are all trapped.